375 Workers To Be Laid Off From Greensboro's ITG Brands

375 employees will lose their jobs at ITG Brands' Greensboro manufacturing facility and the layoffs will start in June, a news release states. 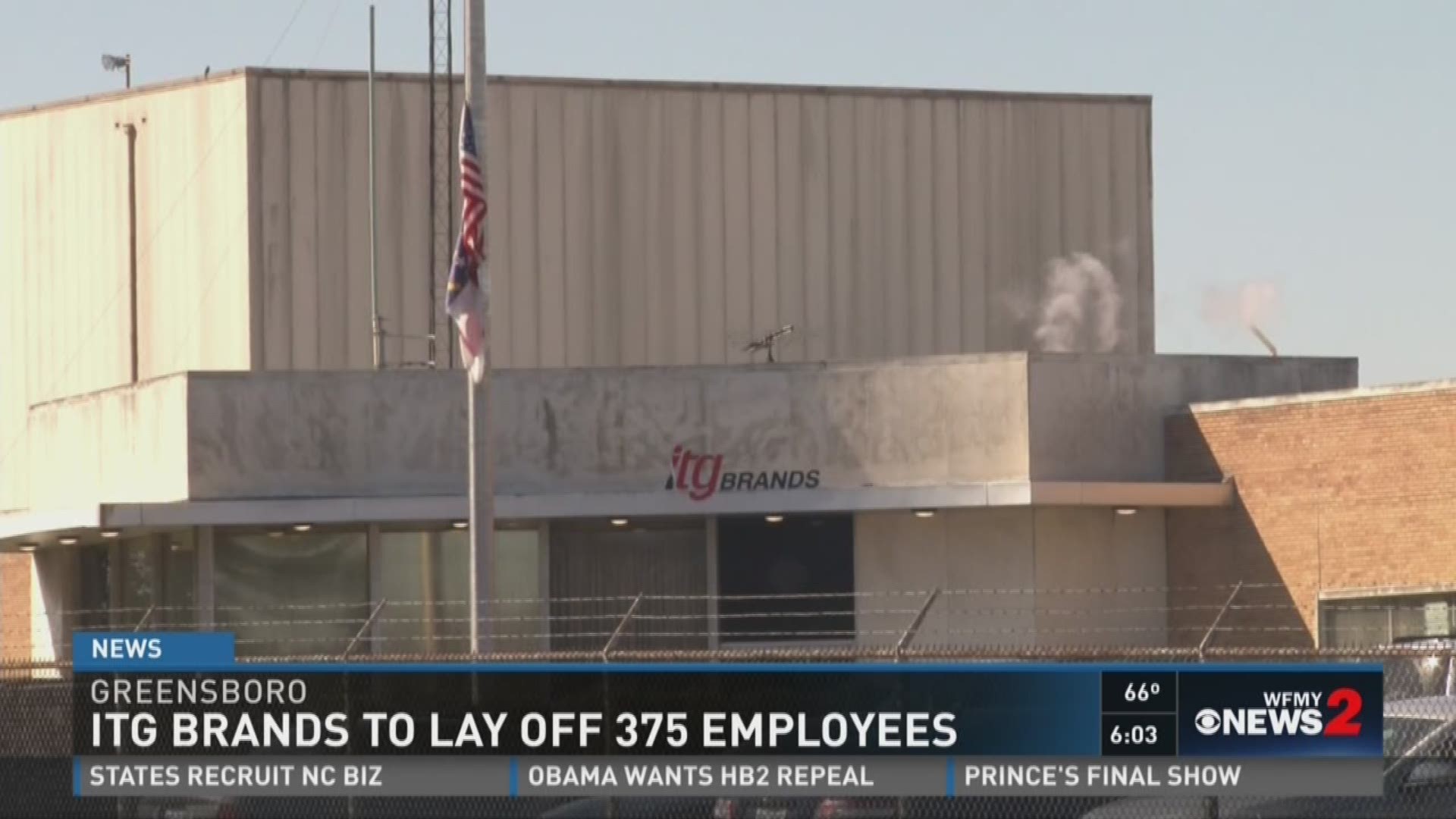 GREENSBORO, N.C.-- Friday morning, managers at ITG Brands confirmed the number of people being laid off and when the layoffs will start. Company officials released the information after notifying state officials.

375 employees will lose their jobs at ITG Brands' Greensboro manufacturing facility when the first round of layoffs start in June, a news release states.

ITG Brands is a new business that was formed following the acquisition of Lorillard last year by RAI and the subsequent sale to ITG Brands of some of the assets and brands formerly owned by Lorillard and RAI. ITG Brands, while the third largest tobacco company in the US, is still significantly smaller than Lorillard, which produced and sold the iconic Newport cigarette brand.

The company has been discussing with Union representatives the anticipated planned reduction in production – a loss of some 50 percent of its volume – due to the end of a reciprocal manufacturing arrangement that the company has in place with Reynolds American (RAI). The arrangement was intended to transition the manufacture of former Lorillard products to RAI and former RAI products to ITG Brands’ facility, ITG Brands officials said in the release.

The company says the layoffs are a direct result of a decrease in the amount of products made.

ITG Brands is only producing half as many cigarettes as they once made before the merger with RAI.

A spokesperson for ITG Brands, Mark Smith, says they needed to make some job cuts in order for the company to sustain itself and possibly grow in the future.

“This was a very difficult decision to make, but nonetheless a decision we had to make,” said Smith. “By taking this first step to appropriately size our Operations to match the product we sell, we will be more competitive and better positioned to grow. We remain open to further discussions with the Union to help us achieve that goal and reduce the impact of layoffs.”

The layoffs are about 2 years in the making -- ever since Lorillard Tobacco merged with RAI and formed the new company.

But when the merger took place, RAI took Newport cigarettes with them, which accounted for about 50 percent of the cigarettes they produced.

"It was a very difficult decision. It was not to taken lightly. But unfortunately it was the decision that we had to make," said Smith. "When a company goes, it really was sold and the new company was formed with half the volume that I had before. It's a matter of looking at that and making some tough decisions. Believe me, we know they were very tough."

If you ask plant workers losing their jobs -- they're not buying that answer.

Fulk says they tried on multiple occasions to negotiate with the company to come up with alternative ways to save money so they could keep their jobs.

"Rather than being a part of the solution, they will be signing up for food stamps and unemployment. That's all they will have to feed their families. It literally means survival for people -- whether they're going to survive with their families or not," said Fulk. "They will lose their jobs. They will have no way to pay for their homes, car payments, feed their kids, take their kids to the doctor. They won't have insurance but for 30 days. Then, no compensation at all! It's not fair!"

ITG Brands says more layoffs are likely on the way. The company says this round of layoffs is just the first step in their plan to grow the business.

However, they haven't said how many more jobs could be on the line or when a second round of layoffs will happen.

On behalf of the workers union, Fulk sent out the following letter, trying to gain more public support in their fight to keep their jobs:

My name is Randy W. Fulk and I am the International Representative for the BCTGM. I am also a former employee who retired from Lorillard after 36 years of faithful service and former President of the Union for almost 10 years. Lorillard has always been a good company that was fair to its employees and good for the community and Greensboro. Lorillard and its employees have given more money to United Way than any business in Greensboro for over 20 years. Lorillard also gave one million dollars to the Civil Rights Museum. I could name more but as everyone knows Lorillard does not exist anymore. Why? Corporate Greed! A man came to town named Murray Kessler who sold the company out. Newport, its major brand was sold to Reynolds (RAI) in Winston Salem for 27.4 billion. That is correct.. BILLION. To get approval from the FTC Reynolds then sold Imperial Tobacco the Winston, Salem and Kool cigarettes, Blu E-cigarettes, the Corporate headquarters, Research and Development and Manufacturing buildings at 2525 E. Market St. The price paid was 7.4 billion. Upon exit with a spot on the board at (RAI) Murray Kessler promised me in person and in writing (attached) "the vast majority of the employees will have a job with RAI or ITG Brands. For those who don't there will be severance packages."Also ITG Brands would honor the contract with Local 317T to expire September 1, 2015. Murray Kessler left with 44 million dollars.

The only thing Mr. Kessler told the truth about was ITG Brands not only honored the contract but proposed to extend it, which was ratified by the Union. A 24 month extension to expire September 1, 2017. Why would they do that? ITG Brands and RAI signed a (RMA)- Reciprocal Manufacturing Agreement to produce the cigarette brands for each other until the Newport was completely moved to Winston Salem and Salem, Kool and Winston Cigarettes were moved and made in Greensboro. That was to take approximately 18 months but because of the loyal hard working employees they have exceeded expectations and it is almost completed. How does ITG Brands plan to honor the employees hard work?

Out of the 860 Union employees, the Union has been informed that 505 will be laid off starting with 320 on June 24th. I ask you Mr. Kessler- does that sound like the vast majority will keep their jobs? The Union was afraid this would happen after Mr. Kessler's arrival so it was agreed in the 2011 contract that before a layoff the Union and the Company would discuss a (VSP) - Voluntary Separation Package. All decent, honorable and fair companies do this to encourage senior people to retire and reduce the pain and devastation of junior people losing their jobs. Very rich VSP packages have been offered by Phillip Morris in Cabarrus, American Tobacco in Reidsville, Brown and Williamson in Macon, Ga and yes even a smaller company like Liggett Tobacco in Mebane, NC. It is sad to say ITG Brands is not an honorable company. They have no loyalty to the many employees they plan to lay off. Many of them are new hires- hired in the last few years to complete the RMA. Now that they are no longer needed they will be kicked to the curb. ITG Brands says the only way they will offer a VSP that will reduce layoffs is to butcher the contract they extended for 24 months. Delete maintenance, service and power plant departments. Sub contract out any and all work at its sole discretion, hire unlimited number of temporary workers, eliminate retiree health care, eliminate pension, profit sharing, etc..

I have been involved in Union business for a long time but have never seen such an underhanded, crooked maneuver as the actions of ITG Brands. While many men and women will be unable to provide food, shelter, medicine and health care for their children and families, ITG Brands continues to give bonuses and golden parachutes to corporate executives. I ask you readers to consider: As corporate greed and CEO's pay sky rockets- will your job be next? As Nabisco lays off workers in Chicago and moves production to Mexico, Irene Rosenfeld has made $165 million in the last 8 years. In the mist of layoffs 38 million was put in her pension with another 21 million pay increase this year.

ITG Brands, Murray Kessler, Irene Rosenfeld- You are exactly what is killing America. Corporate Greed!
ITG Brands- believe me I do understand you are not Lorillard! You are a dirty, ruthless, selfish, greedy company. But remember this: There is a day of judgement for your actions. Please read James 5: 1-6. In case you don't know that is in God's word- The King James Bible.