A Greensboro mom has been fighting for three years, now she might win her battle against an 'outdated' NC law

It's called the contributory negligence law. North Carolina is one of just four states plus D.C. with this law still in the books. 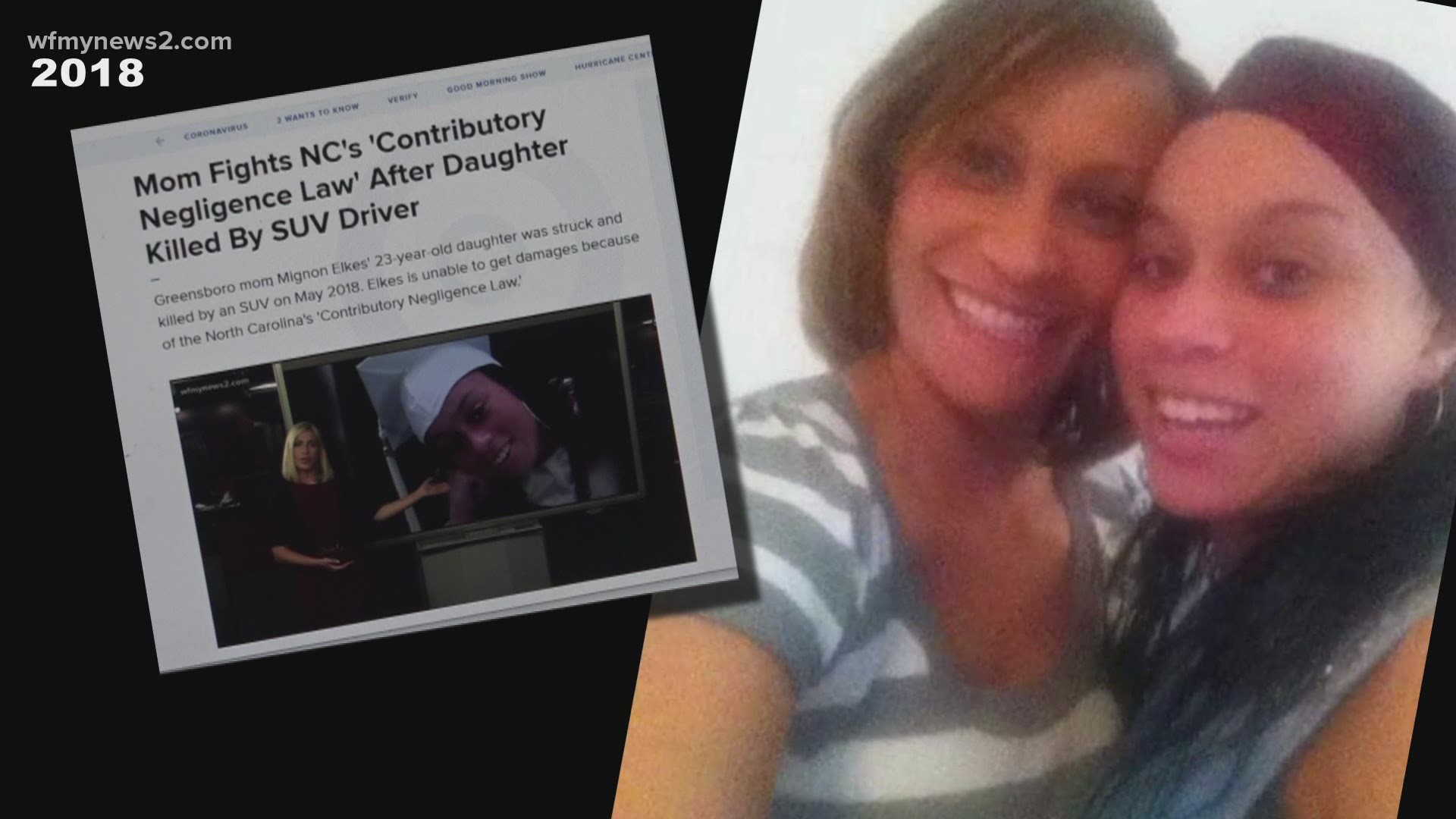 GREENSBORO, N.C. — Did you know that North Carolina is one of only four states left in the country that has what's called the contributory negligence law?

It means even if you're as little as one percent at fault for an accident, you legally cannot recover damages to help pay for things like medical bills.

Greensboro mom Mignon Elkes has been fighting this law since 2018, when police said her daughter was hit and killed by a driver while walking on the side of the road.

"She was very innocent, loving, caring, fun, always thinking about others."

She was walking on the white line on the road in the direction of traffic. There is no sidewalk on Sharpe Road.

"So because she was wearing dark clothing that night, because she wasn't walking on a sidewalk that doesn't exist, she was quote-unquote at fault partially?" WFMY News 2's Jess Winters asked Elkes.

"Correct," she responded. "If you're even one percent at fault in the state of North Carolina, there's no recovering for damages."

Therefore, Elkes was denied any insurance money to pay for things like hospital and funeral expenses.

But after years of advocating and petitioning, the North Carolina legislature recently introduced a new bill to get rid of and replace the contributory negligence law.

"In fighting for this change, that would give me even more satisfaction that her death wasn't just in vain, just someone who was hit by a car 'oh, sorry it was just another accident,' that a change can be made for future victims," Elkes said.

Senate Bill 477, entitled The Victims Fair Treatment Act, would allow victims to have a fighting chance at some monetary compensation, even if they're partly to blame for something like a car wreck.

"There are other victims who have survived accidents who are, you know, severely injured for life and are continuously paying for medical treatment that they’re unable to recover for," Elkes explained. "We're moving to try to get this bill passed."

The vote is happening May 13.

After three years, Elkes said she keeps fighting for change in her daughter's honor.

"I'm a fighter, I'm going to continue trying to fight this so we can get this law passed or changed for future victims," Elkes said.

SB477 would end contributory negligence and result in a fair system that would allow victims to receive justice. Under Contributory Negligence, if you are injured and are even 1% responsible, you get nothing in NC.