More than a century old, the textile mill continues its conversion into modern-day mixed-use development with the Bearded Goat bar. 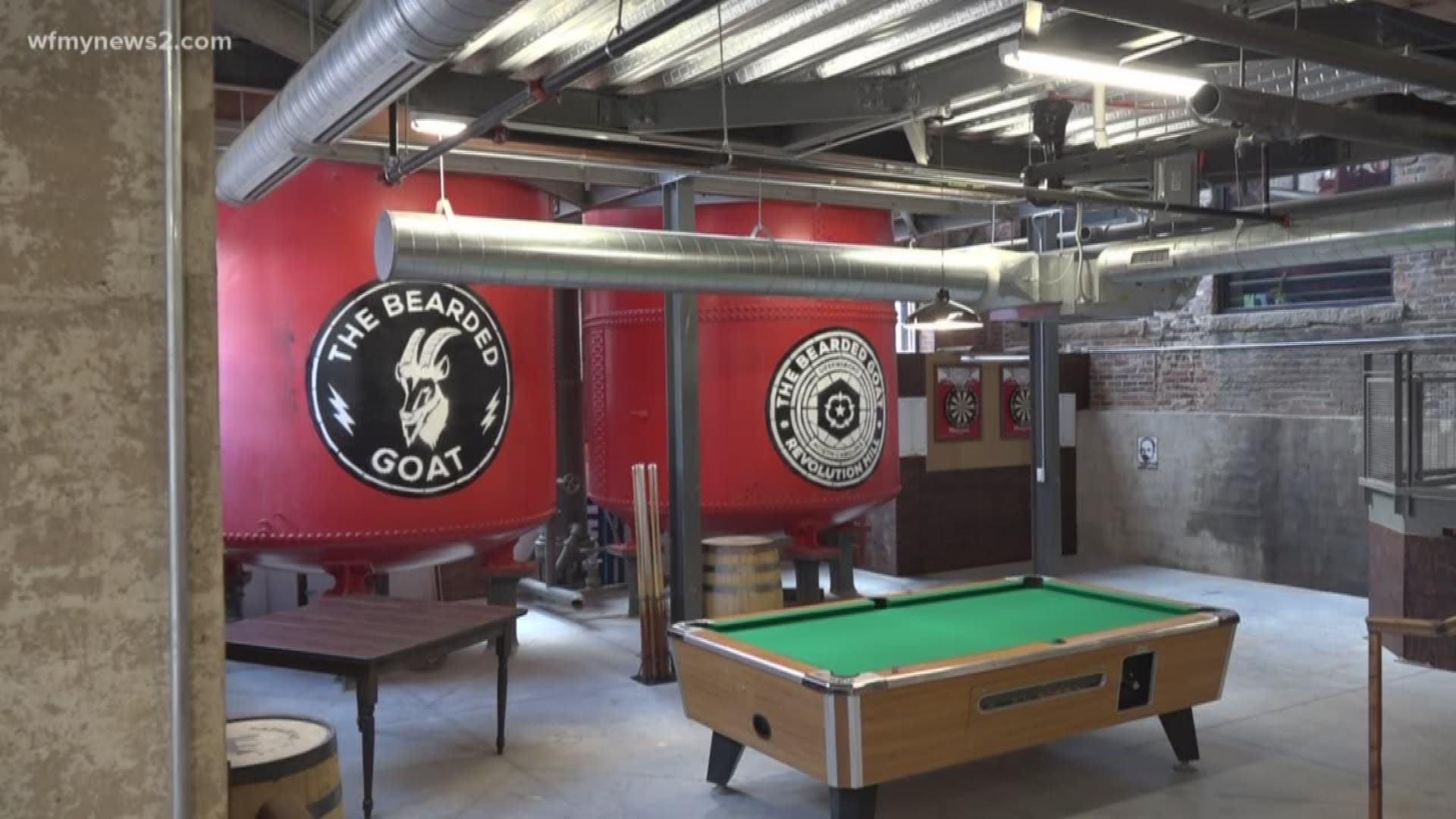 GREENSBORO, N.C. — When The Bearded Goat lit up its "open" sign Friday night, the bar became the latest addition to an ambitious development converting a 120-year-old textile mill into a modern destination to live, work, and play.

Greensboro's Revolution Mill has packed a lot into what used to be an aging flannel mill, the first in the U.S. South. The property is large enough to need a "campus map" to help people find their way around the 150-unit apartment complex, cafe, pizzeria, restaurant, workspaces for 109 companies, and more on site.

"All of the sudden, this little kind of campus community has come alive," said Nick Piornack, General Manager of Revolution Mill, whose job includes managing leasing, construction, and third-party relationships.

Beneath towering smokestacks built in 1898, family and friends gathered at the Bearded Goat on Friday night for a soft opening.

The grand opening for the general public at the Bearded Goat bar at Revolution Mill is Saturday, June 29 at 6 p.m.

"We're very casual. Our motto is, 'Come as you are.' Come as who you are. It doesn't matter how much money you have in your pocket. If you want to spend two bucks or if you want to spend 100 bucks. And we've just really lived by that motto," said Seth Mapes, owners of the Bearded Goat.

The Bearded Goat is expanding to Revolution Mill from its original location in Downtown Greensboro, which opened in October 2016. Revolution Mill first approached Mapes about the prospect of growing to the revamped textile mill about a year and a half ago, said Mapes.

"When we first opened up downtown, I had, I think, three employees for the first couple months. Right now, with Revolution Mill opening, we have roughly between 20 and 28 people working for us with security, bar-backs, bartenders, everything like that," said Mapes.

As for the larger Revolution Mill project, the Bearded Goat is one of the last additions in phase one of development, said Piornack. Architects for the project aim to preserve the historic textile mill atmosphere.

"Adding the bearded goat today is a huge deal for us. This is the third piece of the puzzle," said Piornack.

The Kau restaurant, Cugino Forno pizzeria, and Cafe at Revolution are already open.

In the next step of expansion in phase 2, Revolution Mill will bring new life to the 170,000-square-foot mill house building that used to be a storage and shipping warehouse.

The exact plans for phase two will be announced late summer to early fall, said Piornack.

"Everything is on the table. We really are considering a boutique hotel, about 100 to 120 room hotel. Maybe a little more commercial office, first floor retail, or a couple more restaurants. But we are also looking at other options. Our residential is going so well with our 150 apartments, we are running like 98 percent all the time occupied. Maybe an opportunity to combo residential with a hotel. So it's all on the table, if I knew I'd tell you," said Piornack.