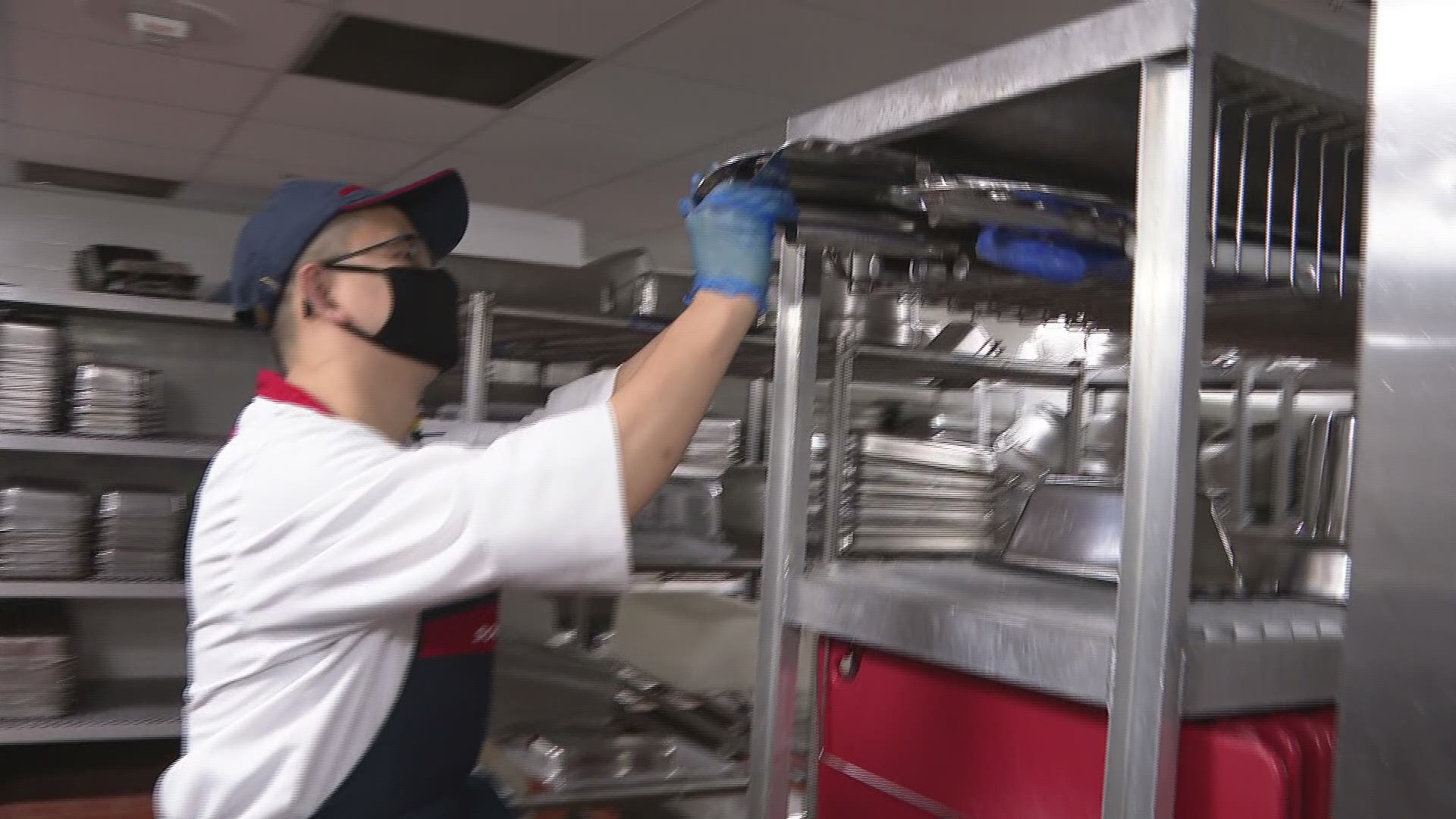 SAN DIEGO —
Imagine working in a kitchen that prepares nine thousand meals a day. Now imagine that work being blind and deaf. In this Zevely Zone, I met a "Cooking Phenom" at the Marine Corps Recruit Depot San Diego.

The mess hall at the MCRD makes 2.4 million meals a year. It's hectic and busy and that's where you'll find Kevin Tong is living his dream.

Kevin is deaf and legally blind.  Laila Chouinard from the Helen Keller National Center helped us communicate by reading Kevin's sign language. "I tell other blind and deaf individuals that even if they have trouble communicating that everyone does," Kevin said.

Kevin was born and raised in Vietnam and moved to the US when he was 14. He learned English and American Sign Language at the same time. "It was very difficult in 1995 I moved here with my parents and it was a struggle to learn English coming from Vietnam was a challenge," said Kevin.

MCRD is America's busiest mess hall. It's run by the food services company Sodexo which was glad to give Kevin a job.

"He's a really fast worker a fast learner. He really has the enthusiasm and the drive. He has a passion for what he does," said Kevin Hollingsworth, the general manager with Sodexo.

Hollingsworth said Kevin knows his way around a kitchen so well, "I actually didn't know he was legally blind until he had been working with us for a couple of weeks."

The Hellen Keller National Center has a national partnership with Sodexo. Laila from HKNC was Kevin's job placement specialist who was well aware of his patriotic purpose.  As a boy, Kevin dreamed of becoming a Marine and he says cooking for them is the second-best thing.

Because of his challenges, Kevin couldn't enlist but he said, "I am really happy to prepare food for them to prepare whatever I can for the Marines who are going to be deployed or coming back home I am happy to support them."

At age 17 Kevin learned to cook and work around sharp knives and hot surfaces. When he turned 30, Kevin started losing his vision due to Usher’s syndrome and couldn't find a job.

"It was very frustrating because I had applied to various jobs and tried to keep a positive attitude but was not successful," said Kevin.

Laila from the Helen Keller National Center connected Kevin with MCRD about a month ago. Since then, Kevin's inspiring story has been shared across America.

"I am really shocked that I am getting all of this attention, I see all of these posts and this is the first time this has happened, and I feel very proud of myself," said Kevin.

Proud to serve food and his country.

Headquartered in Sands Point, New York, Helen Keller National Center for Deaf-Blind Youths and Adults (HKNC) has 10 regional offices across the United States and is the only comprehensive national program that provides information, referral, support, and vocational and independent living training to youths and adults who are deaf-blind. In the last ten years alone, the Sands Point HKNC campus and its regional offices have provided services to more than 8,000 consumers and nearly 2500 families.

Kevin Tong was born deaf and started losing his vision at the age of 30 due to Usher's Syndrome. If you'd like to learn more information about the Helen Keller National Center click here.