Check Your Yard: Mosquitoes Are Breeding

After a pretty warm winter, Forsyth County health officials say mosquitoes are breeding earlier than ever this year in the Triad. 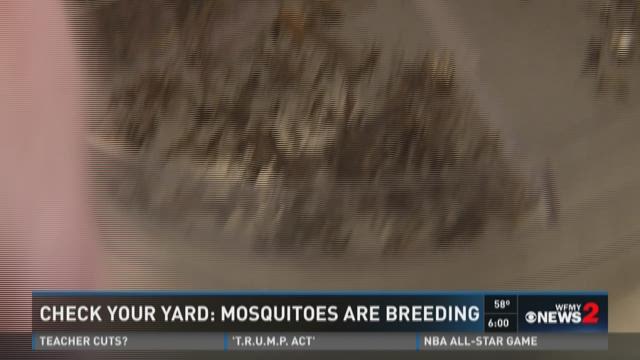 TRIAD, NC -- The storms have finally cleared out but the Triad is still wet after a week filled with rain.

Now, we'll be dealing with a different kind of weather problem, mosquitoes.

After a pretty warm winter, Forsyth County health officials say mosquitoes are breeding earlier than ever this year in the Triad.

Fowler says they look for areas with standing water and it doesn't take much.

According to the Forsyth Co. Health Dept., as many as 1,000 mosquitoes can breed in something as small as a bottle cap.

Fowler says that's why you should check your back yard and dump out any containers with leftover rain water.

"You see just this small amount of water here, I can barely cover my fingers with it here but that is ample amount of water to cook off a large batch of mosquitoes," said Fowler.

Workers at McNeely Pest Control have been busy lately.

Usually they start treating mosquitoes in May but they said this year, they've gotten so many calls, they had to start a month early.

There are 35 different species of mosquitos in the Triad and some of them have been known to carry diseases like Zika.

"Mosquitoes are one of the number one vectors for disease,” said Fowler. “It's really important that we stay on top of that for the health of our kids and our families and it also allows us to enjoy our outdoor spaces when we're having dinner at night."

Instead, they trap them, freeze them and send them to the state to be tested for viruses.