While authorities put out descriptive information about missing 6-year-old Faye Swetlik, who was later found dead, there was no AMBER Alert. 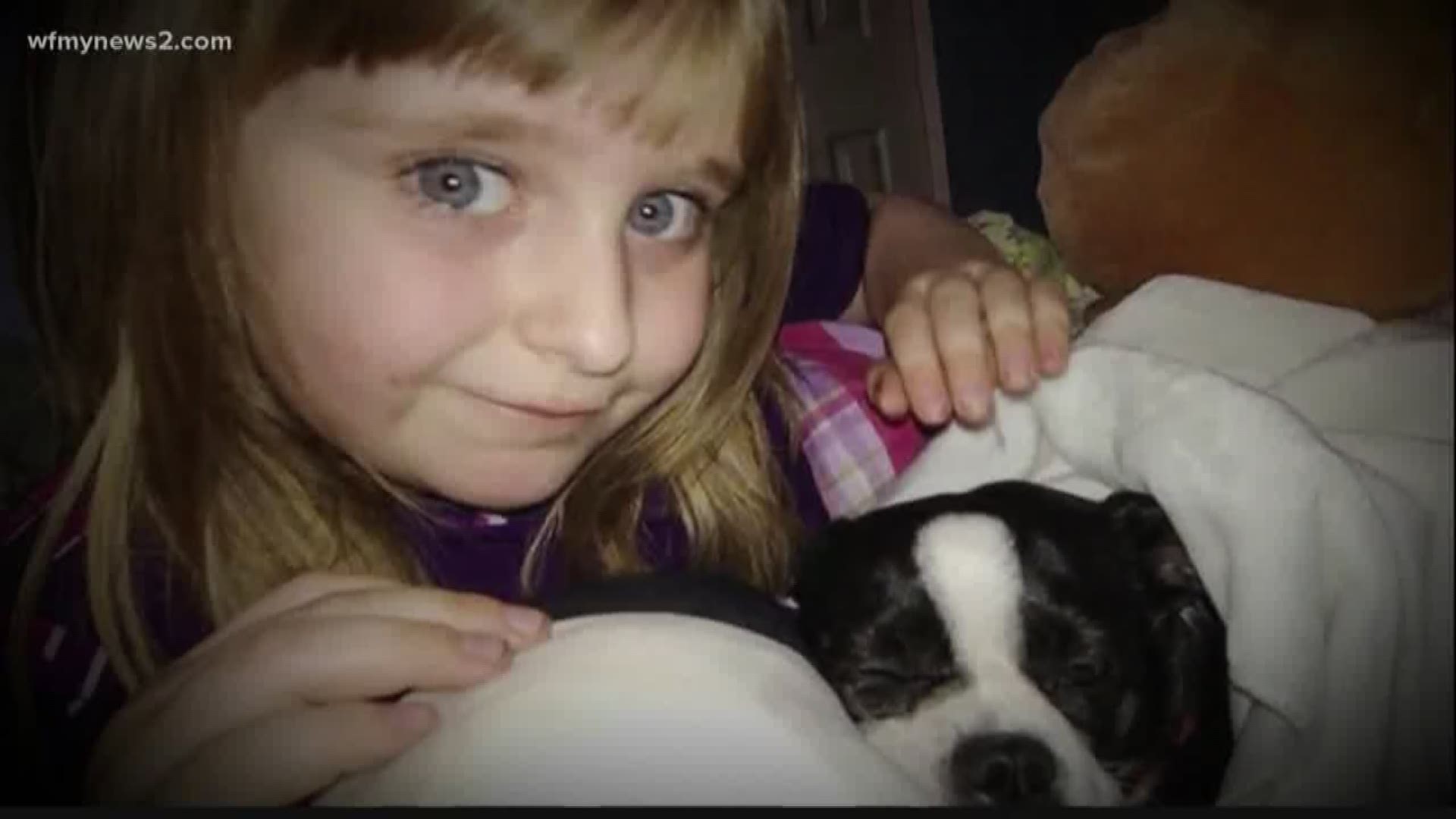 GREENSBORO, N.C. — Investigators say 6-year-old Faye Swetlik was playing in the front yard of her home in Cayce, South Carolina when she disappeared, Monday afternoon. Swetlik was missing for four days before authorities found her body. They are now investigating her death as a homicide.

A 30-year-old male neighbor was also found dead. Investigators have linked the two deaths but won't state what caused them until after an autopsy is conducted Saturday.

While authorities put out descriptive information about the missing child, there was never an AMBER Alert. That issue is raising concerns surrounding the criteria for what missing child cases rise to the level of consideration for an AMBER Alert to be activated.

Cayce Department of Public Safety
There have been a lot of questions regarding why an AMBER Alert has not been issued in the disappearance of Faye Swetlik and this case so far does not meet the federally mandated guidelines. For an...

"I feel like when a child goes missing that should be the first thing assumed, that we should assume that they are in danger and that they need help. We should not assume that they ran away or are with another parent," said Jessica Edwards, a Greensboro mom, and teacher.

"When there is an actual missing child that could be in danger, an AMBER Alert should be issued out immediately. You don't want to waste any time because, especially with the way the world is now, with trafficking going on, so many dangers that did not used to be in past decades, it is very important that we provide them [the safety] that they deserve and need," Edwards said, "If AMBER Alerts are not being put out for children when they go missing, too much time is going in between."

"What's the harm in issuing an AMBER Alert? What if that child really was abducted?" asked Greensboro mom, Wendy Fuchs.

"I feel like time is of the essence especially in the very beginning when a child is first missing and that's not the time to answer questions and limit the use of the system that could save a life," said Fuchs. 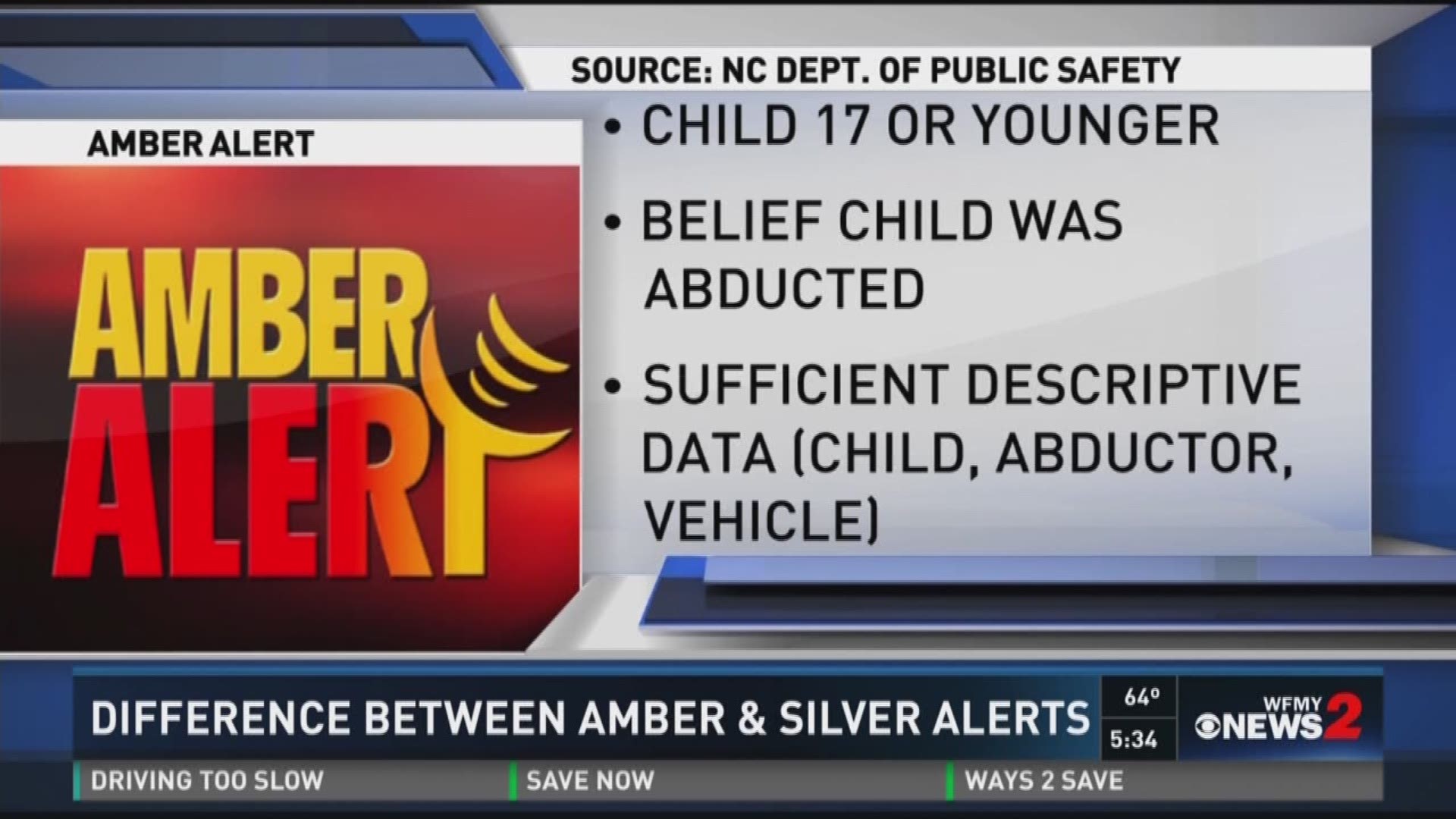 The North Carolina Center for missing persons requires two hours of a preliminary investigation report which would be passed on to the state before law enforcement can request an AMBER Alert.

Nationally, the uniform criteria for a missing child's case to be elevated to an AMBER Alert is very strict and all the standards must be met.

According to the NC Center for Missing Person, an AMBER Alert can only be issued if the missing child is/was;

Believed to have been abducted, and the abduction has been reported to and investigated by a law enforcement agency.

Descriptive information of the child, captor or the captor's vehicle

Not taken by a parent (unless the child is in danger)

Not believed to be a runaway or voluntarily missing

The NC Center for Missing Persons said it issued 9 AMBER Alerts in 2019 and received 9,205 missing persons' reports for juveniles (17 years of age and younger) from across the state in 2019.

Silver Alerts have no age limit and can be used when the request does not meet the criteria of the AMBER Alert. North Carolina's AMBER Alert criteria mirror that of the National Center for Missing and Exploited Children’s recommendations, a spokesperson said.

The center said it is not aware of any complaints with the national or local processes.

"I follow all the cases and I know sometimes they do and sometimes they don't and I didn't realize there were criteria that would limit that and that concerns me. Waiting to meet certain criteria makes no sense," Fuchs said.

"They should try not to pass judgment at the beginning about whether it is a custody issue or not really a child missing, I feel we need to take each one (missing child case) seriously, right off the bat," added Fuchs.

Some child advocates and law enforcement leaders admit meeting every single criterion in order for a case to rise to an AMBER Alert can be challenging.

"The issue that we run into is getting the additional information in order for an AMBER Alert to get done," said Deputy Chief Brandon Medina, of the Nash County Sheriff's Office. Medina is also the vice president of the board of The Child Advocacy Centers of NC.

"Sometimes we don't know whether there is an abductor or not. It doesn't do good to do an AMBER Alert if you don't have the sufficient information to provide to the public to assist," added Medina.

Medina also said many missing children cases are solved without the need to issue an AMBER Alert.

"We are always looking for ways to better put the word out because there are generations out there that don't use technology and they rely on TV and radio. If you see something say something, we always encourage our citizens to always call in suspicious activities because it may seem like something to them but it could be part of an investigation," said Medina.

But some researchers say the AMBER Alert system needs to be re-evaluated because it is largely ineffective.

"The fundamental problem is not with the intentions of the people who operate the AMBER Alert, the system itself is conceptually flawed," said Timothy Griffin, Assistant Professor at the  University of Nevada- Reno.

Griffin co-authored a report examining the effects of AMBER Alerts.

"The alerts appear most likely to be "successful" in familial abduction situations instead of the more menacing stranger abduction cases for which they were intended," reads the abstract.

"The abductors are so motivated to do the horrible deeds that nothing we can do is going to be fast enough," said Griffin.

"It's a symbolic attempt, and a very sincere one to address the child abduction problem but it is not helping in cases where it is really needed," said Griffin.

Griffin believes some of the problems with the system include not being issued when they should be and not working as intended.

"With not issuing (alerts) in cases that ended tragically, the reality is that in every one of those cases their resistance to issuing actually made sense, at the time," concluded Griffin.

According to the Department of Justice, 967 children across the country were rescued specifically because of an AMBER Alert as of September 2019.