Following the death of 43-year-old actor Chadwick Boseman, tributes and messages of support continued to come in on Saturday for the Howard University alum.

WASHINGTON — While many will remember 43-year-old actor Chadwick Boseman as iconic actor and a voice of social justice issues in America -- for the Howard University community -- he was one of their own.

As a graduate of the school in 2000, Boseman would later play numerous notable roles, including T'Challa in "Black Panther."

After news of his passing was reported late on Friday, many posted messages of what Boseman meant to them and the difference he made.

"Boseman was a man of grace and humility," wrote President Wayne A.I. Frederick in a letter to the Howard community. "A deep thinker who had a deep passion for writing and uplifting his people. A staunch supporter of social justice, he did not shy away from using his voice in service to those without one."

The support for the late actor continued to pour in on Saturday, with Howard University Provost Dr. Anthony Wutoh saying Boseman was a great actor and an even better man.

"His death leaves such a big chasm in terms of what he meant to the university, what he meant to our students," he said during an interview with WUSA9 on Saturday. "It’s a tremendous loss for the university. I’m grateful that we’ll be able to remember him and he'll be immortalized in the roles that he played."

Among the famous roles that Boseman portrayed on film included Jackie Robinson in "42" and Thurgood Marshall in "Marshall."

With "Black Panther" in particular, Dr. Wutoh said Boseman helped Black children dream of being strong leaders who could make a difference.

"Particularly for young kids who would see the movie and could see a character that looked like them doing these astounding things and having these super powers in a leadership role as a king, it meant more than we could have imagined before the movie came out," he said. "It was such a great portrayal and a wonderful character and role that I think it will continue to leave a lasting legacy.”

Other supporters also pointed to the words of Boseman's commencement speech at Howard University in 2018 and the impact the speech had on them. 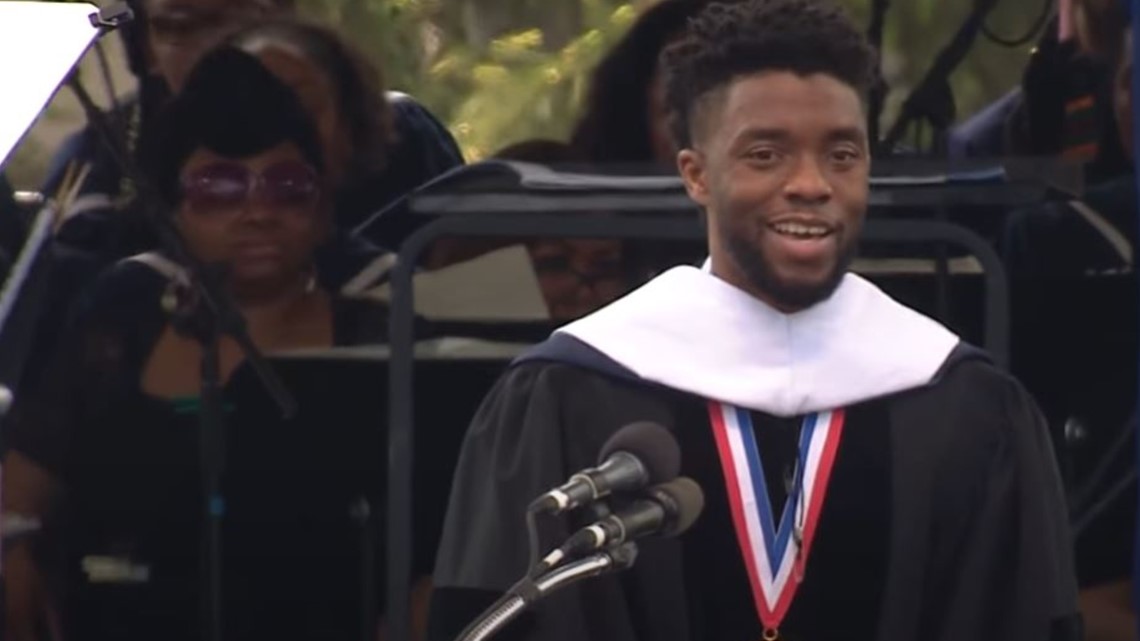 'Purpose is the essential element of you': Listen to Chadwick Boseman's 2018 Howard University commencement speech
Boseman passed away from colon cancer on August 28, leaving behind an illustrative legacy in film. He was 43-years-old. WASHINGTON - On May 12, 2018, a 41-year-old Chadwick Boseman looked out at a crowd of hundreds of starry-eyed graduates and their loved ones.

In his letter to the school community, President Frederick noted how the actor motivated others to find their calling.

"During his remarks, Boseman shared his journey of challenges and successes in navigating the Hollywood entertainment industry. He described how he chose to speak out when asked to play characters that belittled the image of the Black man. He intentionally chose roles that reflected the vision of his people that he wanted to see on screen," he wrote. "Boseman spoke fondly of his days at Howard, calling it 'a magical place' and saying, 'when you have reached the Hilltop and you are deciding on next steps, you would rather find purpose than a career. Purpose is an essential element of you that crosses disciplines.'"

"It was one of the most motivational commencement speeches that I’ve ever heard," Wutoh added.

Moving forward, Wutoh said the school will likely hold conversations of how to properly honor Boseman.

Above all else, the provost said the Howard University alum would leave a lasting legacy far beyond campus.

"He really and truly was one of our shining stars as an alum," Wutoh said. "As great as his talents were as an actor, he was always very humble, graceful and grateful.”