Friday marked day one of demolition in High Point on a project that could change the entire landscape of downtown. 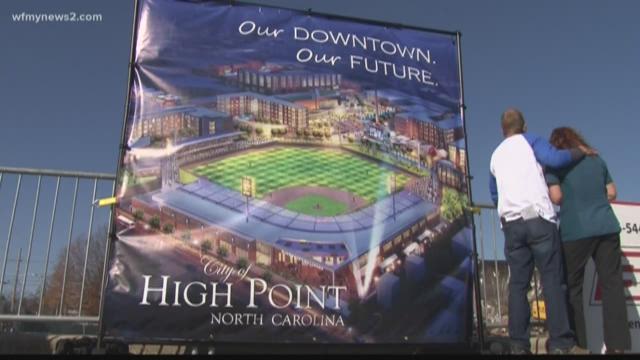 HIGH POINT, NC -- Friday marked day one of demolition in High Point on a project that could change the entire landscape of downtown.

After more than two years of planning and debate, the city finally broke ground on its new multi-use stadium and put on a party to celebrate.

Hundreds of people lined up early on to be apart of "Demo Day" and the celebration.

"We are so excited. This day had to come. We've been waiting for it," said Merritt and Yvonne Short, lifelong residents of High Point.

There was dancing in the streets and cheering in the bleachers as crews demolished a former doctor's office on Church Avenue and Pine Street -- the future site of the new multi-purpose stadium!

"This is exciting. It's good to see," said High Point resident Ray Beausoleil. "All progress starts with something going down."

Over 2,000 people came out to watch the first step in revitalizing downtown High Point.

The city handed out t-shirts and pennants, cracker jacks and hot dogs to celebrate Demo Day.

The marching band and dance team from Andrews High School paraded through the street.

High Point Mayor Elect Jay Wagner caught the ceremonial first pitch, with the promise of many more to come.

Friday's demolition was only the first step in a complete downtown revitalization plan.

The project also includes a childrens' museum, a new hotel, apartment building, stores, and lots of amenities around the stadium.

Now that the first building is down, the anticipation is only expected to go up.

"Take me to the ball game," said Short. "We're waiting for the first pitch to be done."

Guilford County Commissioners haven't decided if they plan to pitch in on the $36 million dollar price tag.

But High Point City leaders say they're prepared to pay for it themselves using revenue generated from the stadium itself to pay off the debt.

The plan is to have the stadium built and ready to go by Spring of 2019.