Executive Director of the Greensboro Housing Coalition Josie Williams said the executive order builds off of the CDC moratorium as another level of protection. 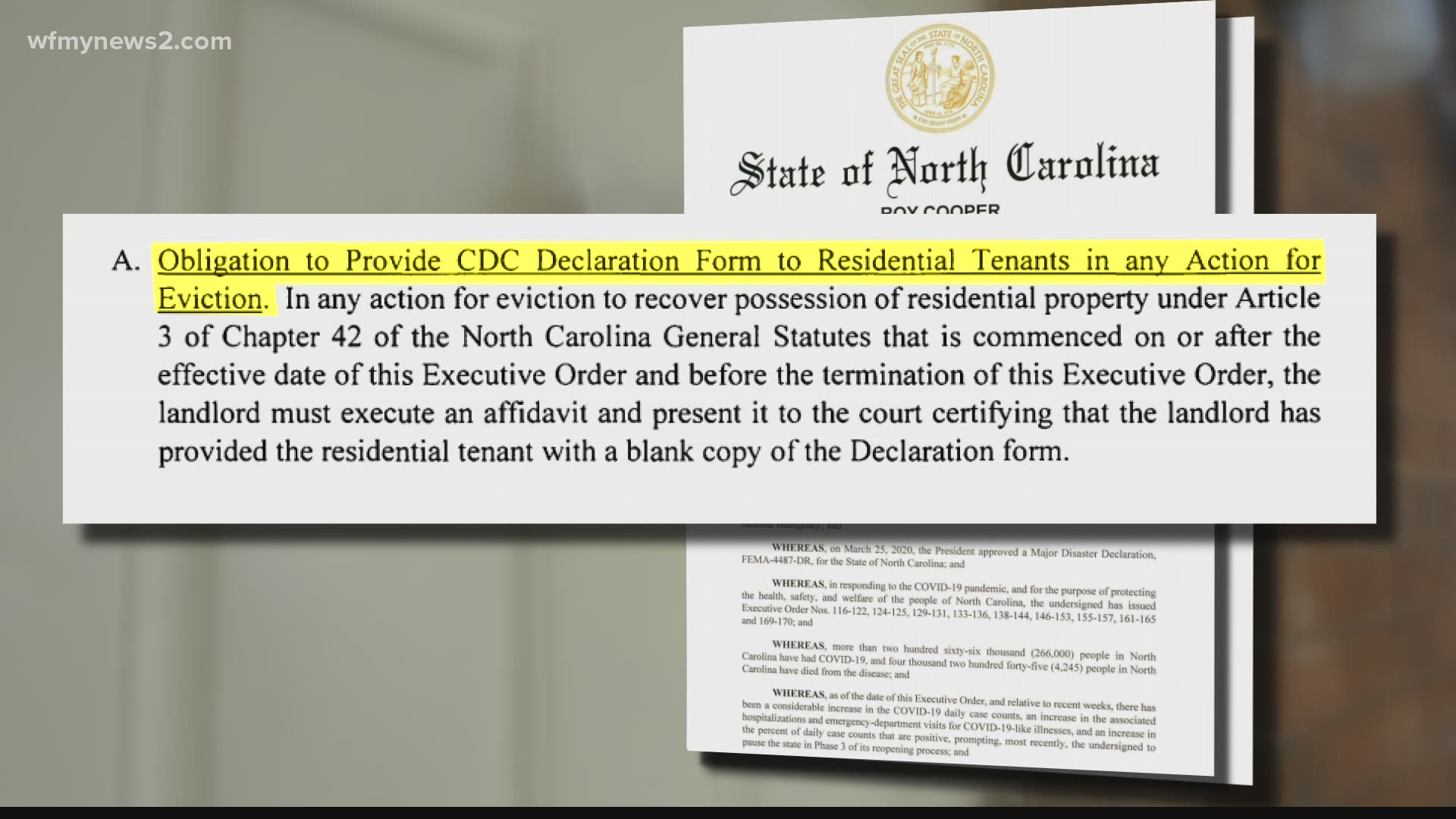 GREENSBORO, N.C. — More relief is on the way for renters after Gov. Roy Cooper signed an executive order to strengthen eviction prevention.

The governor announced the move Tuesday, saying confusion over the CDC's temporary eviction moratorium protects residents, but is confusing and has, "caused inconsistent enforcement and unwarranted evictions in some parts of the state."

This executive order requires landlords to make tenants aware of their rights under the CDC order, including giving residents the option to fill out a declaration form before starting the eviction process.

Once tenants provide the declaration, the executive order puts procedures in place to help better protect the tenants.

Executive Director of the Greensboro Housing Coalition Josie Williams said when she heard the news of the executive order, she was relieved.

Williams said the CDC moratorium has been helpful, but the confusion that came with it made it all that more complicated.

"One of the things we noticed early on is the fact that it came from the CDC and the question is, can they do that?" said Williams, "The next thing is the protections and how the courts would utilize that."

Williams said they heard from residents with concerns over exercising their right to the CDC declaration.

"The tenant has to exercise their right and show that they had given that CDC moratorium declaration to their landlord and they would have to sign it and have proof that they gave it to the landlord," said Williams. "When you’re in a situation and you’re already scared and you’re already at risk of eviction to exercise your right in that manner is very intimidating to people."

Williams said her office has seen an uptick in calls and complaints from tenants about the enforcement of the CDC moratorium on evictions.

"So without a state order like what Governor Cooper just did, I'm not saying there still won't be some confusion, but when you bring it down from the state to layer on top of the moratorium that just makes it more powerful and more effective," said Williams.

Williams said she comes in contact with families every day who fear they'll become homeless.

"I've seen families with children that ended up getting evicted, never been homeless before, now homeless," said Williams, "To have hundreds literally hundreds of clients that we touch every single week and those numbers are rising.. its very alarming and its hurtful and disheartening to see how theres this fight to get resources allocated properly.

But Williams said she understands both sides of the issue.

"Even now we have this executive order, it's not enough because you have to also consider the property owners that are in need of paying these mortgages," said Williams.

Property owners like Jim Routh. He owns dozens of properties in Guilford County.

Routh said the new executive order is just a little bit more paperwork for him. "It did set up some help for tenants, which is also help for landlords," he said.

Luckily, Routh said, this pandemic hasn't posed too many problems for his properties.

"We rent from the $700 to $1200 range. They all know that they're going to have to pay the rent eventually and it's just not been that much of a struggle for us," he said.

Routh said he's been able to work with his tenants throughout the pandemic, which has made things go smoother.

"We've had a couple of tenants say, 'Look, I've lost my job because of COVID,' and it comes down to what a landlord and tenant are willing to do and you work with people and that’s the way we get through the whole thing," Routh said.

"In the end, we actually didn’t need too much of it, people just figured out ways to pay rent and if it needed to be late we worked with them," he said.

Routh has had to go to court in some cases, which he said is the worst part of his job.

"That’s never a good feeling," he said, "We try to take it easy with that part of the whole process but in the same token you have to do what you have to do to protect your investment."

Williams said there needs to be a more comprehensive approach.

"This was a relief. We appreciate it. It's going to be very helpful, but it's not enough. There has to be a comprehensive approach to how this pandemic is dealt with,' Williams said.

RELATED: HOPE Program pays your rent & utilities. How to apply