Dangerous and deadly or debunked myth? The Chauvin murder trial is a battleground over dangers of prone restraint asphyxia. 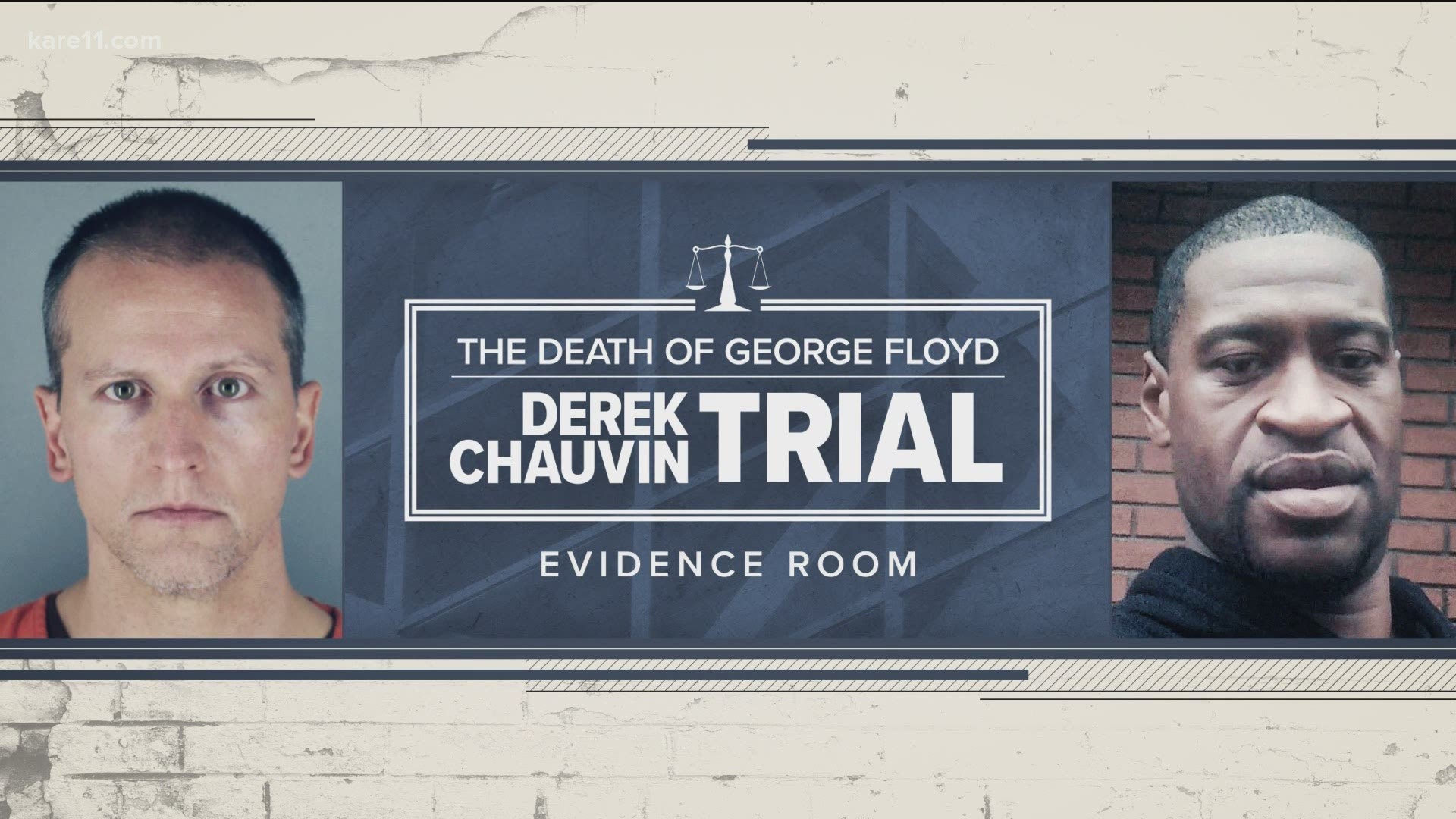 MINNEAPOLIS — “Once you secure or handcuff a person, you need to get them out of the prone position as soon as possible because it restricts their breathing,” Minneapolis police Lt. Richard Zimmerman testified.

That’s the training Zimmerman said he has received on the dangers of the prone position since 1985.

Despite training like that, bodycam video shows former Minneapolis Police officer Derek Chauvin knelt on George Floyd while he was face down on the ground for 9 minutes and 29 seconds.

“The most important numbers you will hear in this trial are 9-2-9,” prosecutor Jerry Blackwell told the jury.

Prosecutors emphasized that length of time as evidence Chauvin used excessive force and violated his training.

But a KARE 11 investigation has uncovered evidence that some police officers recently have been getting a different message – including from a prominent Minnesota researcher – claiming the dangers of prone restraint have been debunked.

For decades, police officers have been trained that restraining suspects in the prone position with weight on their backs is dangerous and even deadly.

A 1995 Department of Justice bulletin warning of “Sudden Death” instructed officers that as soon as a suspect is handcuffed, get them off their stomachs because of the risk of positional asphyxia.

Credit: KARE 11
A Department of Justice bulletin in 1995 warned that positional asphyxia can cause sudden death.

However, deaths following prone restraint continue to happen and have cost taxpayers more than $120 million in payouts in wrongful death lawsuits in just the last decade, a KARE 11 investigation discovered.

In videos from some of those incidents, police officers seem surprised when the person they are attempting to take into custody stops breathing.

Why have the deaths continued – and why do officers seem surprised when they happen?

Is prone restraint risk a myth?

KARE 11’s review of popular police publications shows officers were also being told that the dangers of prone restraint – and resulting positional asphyxia – have been scientifically debunked.

The day after George Floyd died, KARE 11 spoke with several police trainers and use of force experts about the witness video going viral showing the police officers on top of George Floyd.

Duane Wolfe, a law enforcement instructor at Alexandria Technical and Community College said, “Ideally, once you got a compliant subject you would take the weight off.”

When asked about the danger of prone restraint, he said, “Years ago there was an issue called positional asphyxia.”

But he quickly added that information was outdated. “The research that has been done since that time has shown us that positional asphyxia actually doesn’t occur,” Wolfe said.

Much of the research claiming to debunk prone restraint risks has been done by a prominent Minnesota professor and scientist.

Mark Kroll, PhD, is an Adjunct Full Professor of Biomedical Engineering at the University of Minnesota.

He also sits on the board of Axon Enterprise, the manufacturer of Taser stun guns and body-worn cameras, the same brand worn by the Minneapolis Police Department.

He has hundreds of device patents – and even an award of distinction from former Minnesota Gov. Mark Dayton – on his resume.

An article from 2019 has the headline; New Study: More Evidence against the Myth of Restraint Asphyxia.

“Prone restraint is needed for officer safety, and the stake needs to be driven into the heart of the stubborn myth that this procedure is inherently excessive and dangerous,” Dr. Kroll is quoted as saying.

Another article authored by Kroll lists his sub-specialty as a scientist in “biomechanics arrest related death (ARD).” It states prone restraint and positional asphyxia have been thoroughly and scientifically debunked as a cause of ARD.

Credit: KARE 11
U of M professor Mark Kroll has testified that prone restraint is not dangerous.

As an expert witness in use of force cases Kroll has testified that there are no risks to face-down restraint even if weight is applied to the back.

Critics of the research done by Kroll – and a handful of other doctors who routinely testify on behalf of police in prone restraint-related wrongful death cases – claim their experiments do not accurately simulate real life arrests.

The experiment participants being pinned automatically understand they are not in real danger and are not under the influence of narcotics or dealing with underlying medical and mental health conditions.

KARE 11 repeatedly requested an interview with Dr. Kroll to discuss his findings on prone restraint.

He declined, instead sending an email seeming to downplay his own research. He wrote: “I did some minimal research on this a few years ago and am no longer active in the area.”

Dr. Kroll pointed KARE 11 to other “leading experts” in the field including a well-known San Diego doctor named Gary Vilke.

Dr. Vilke spoke with reporter Chris Vanderveen at 9News in Denver who has partnered with KARE 11 for our on-going reporting on prone restraint-related deaths.

When police officers and departments are sued after someone dies while being held in a prone position – facedown and frequently handcuffed – Vilke has proven more than willing to share his research with juries and judges.

Vilke tells them that prone restraint almost always had nothing to do with their deaths.

Asked if prone restraint is dangerous Vilke said, “The answer is, ‘No.’ That position itself is physiologically neutral.”

When Branch Wroth, 41, died underneath a pile of officers in Rohnert Park, California back in 2017, Dr. Vilke told the jury Wroth died of “sudden cardiac arrest.”

During closing arguments, the attorney for the Wroth family could hardly contain his disgust over that conclusion.

“Dr. Vilke’s testified in dozens, over a hundred cases, consistently opining case after case that the police did nothing wrong," Izaak Schwaiger told the jury. "It wasn’t them. It was something else,”

Vilke is used to the accusations and shrugged off the “hired gun” comment.

“I’m paid for my services, so I do get paid," Vilke said. "I am hired, not necessarily a hired gun in my mind. I get hired for my expertise.”

Vilke bases his conclusion that the prone position is not dangerous on research he started in the mid-1990s. He says he found that suspects can handle multiple people holding them prone for long periods of time. That’s how he’s testified – and continues to testify – in use-of-force cases.

Juries and judges don’t always buy his science. This year, after paying Dr. Vilke tens of thousands for his services as an expert witness, the Rohnert Park Police Department ultimately shelled out $2 million for the death of Branch Wroth.

“People may believe it, they may not believe it,” Vilke said. “That’s why we have jury trials.”

He says his science is sound, however. Sure, he acknowledges, prone restraints might not look great from an “optics” standpoint.

“It looks a lot better, it’s a lot less confusing if the person has a cardiac arrest with nobody on top of them as opposed to if there are several people holding them down,” he said.

Based on opening statements and early testimony in the murder trial of Derek Chauvin for the death of George Floyd, expect the jurors to hear the same mixed messages officers have been getting about the dangers of prone restraint and its risk of causing asphyxiation.

“Citizens who are under arrest should never be put in the prone position except only momentarily to get them under police custody or control,” prosecutor Jerry Blackwell told the jury.

Blackwell said the prosecution plans to call experts and show evidence they believe will prove that Floyd was held far too long in a position that interferes with breathing and that former officer Chauvin knew the position was dangerous.

“The dangers of the prone position – putting people face down on the ground – have been know about in policing for over 30 years,” Blackwell said.

In his opening statement, defense attorney Eric Nelson told jurors that prone restraint was not the cause of Floyd’s death.

Instead, Nelson promised to show the jury evidence of Floyd’s past drug abuse, high levels of opioids found in his blood during an autopsy, and his underlying medical conditions.

So far, members of the Minneapolis Police Department who have testified as prosecution witnesses have indicated they have been trained to get off suspects as soon as they are handcuffed and to get them on their side to facilitate breathing.

“Once a person is cuffed, you need to turn them on their side or have them sit up,” Lt. Zimmerman said when asked what MPD’s training mandated. “You need to get them off their chest.”

On the witness stand Monday, Minneapolis Police Chief Medaria Arradondo cited the danger of prone restraint. “If they’re proned, handcuffed, and there’s pressure around their airways or on their back, the risk in potential for them - in us killing them goes up substantially,” Arradondo testified.