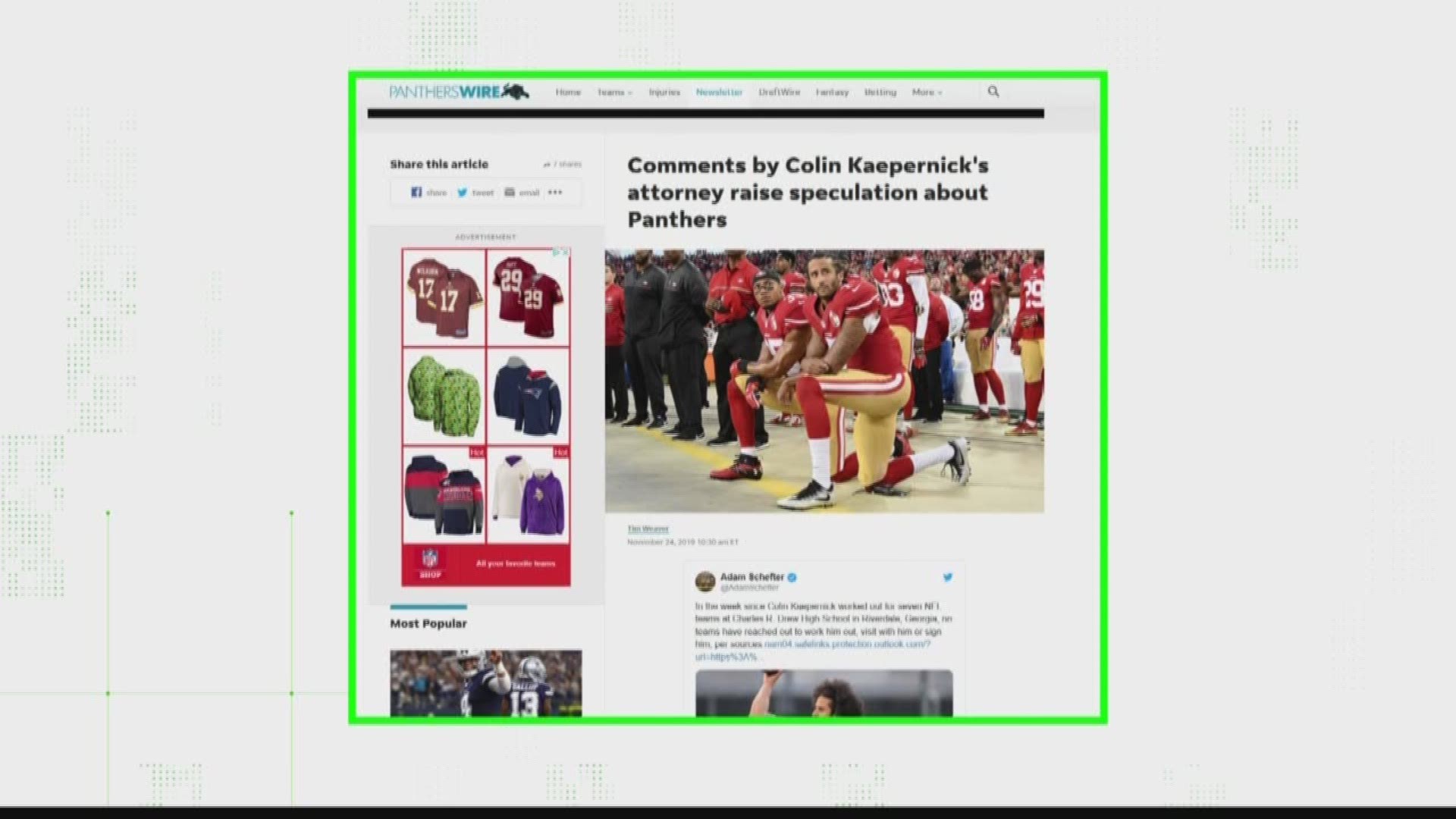 GREENSBORO, N.C. — A losing season and an injured top quarterback have Carolina Panthers fans begging for a fresh start and, perhaps, fresh talent. The rumor mill is running interceptions about the future QB...and whether it involves one of the league's most controversial players.

Good Morning Show viewer Bobby Garrison asked the WFMY VERIFY team, "I read where Colin (Kaepernick) is coming to the Panthers. Is there any truth to this?"

Kaepernick is the former San Francisco 49ers quarterback who sparked controversy when he kneeled for the National Anthem. He said it was a move to protest police brutality against African Americans. The 49ers later dropped Kaepernick, and ever since, he publicly has sought out another NFL team.

Garrison likely saw an article from Panthers Wire, which claims Kaepernick's attorney Mark Geragos indicated the Panthers might be considering Kaepernick. Geragos reportedly said two teams were interested, including "one who is legitimately in need of a quarterback who had a very poor showing on Sunday..."

The Panthers have had several poor showings lately, including six in a row with backup quarterback Kyle Allen and one with backup Will Grier.

Reid said, "He (Tepper) communicated to me that they weren't looking to add a veteran quarterback."

Secondly, the Panthers did not attend the workout Kaepernick held for himself in Atlanta in November.

Thirdly, "With the limited amount of cap space for the 2020 season and a big decision looming on Cam Newton's future with the franchise, it is highly unlikely they'd spend that money adding another quarterback," Higgins explained.

Colin Kaepernick will want to 'keep pounding' elsewhere on his job search, as the Carolina Panthers seem unlikely to sign him.

Do you have a VERIFY inquiry? Submit a post, selfie video or screen shot of the article in question to:

RELATED: Keep Cam in Carolina! GoFundMe to raise money for billboard is halfway to goal

RELATED: VERIFY: Poinsettias are only mildly toxic to pets

RELATED: VERIFY: Those white wisps on your trees are frost flowers

RELATED: VERIFY: You can donate blood even if you've had diabetes, cancer