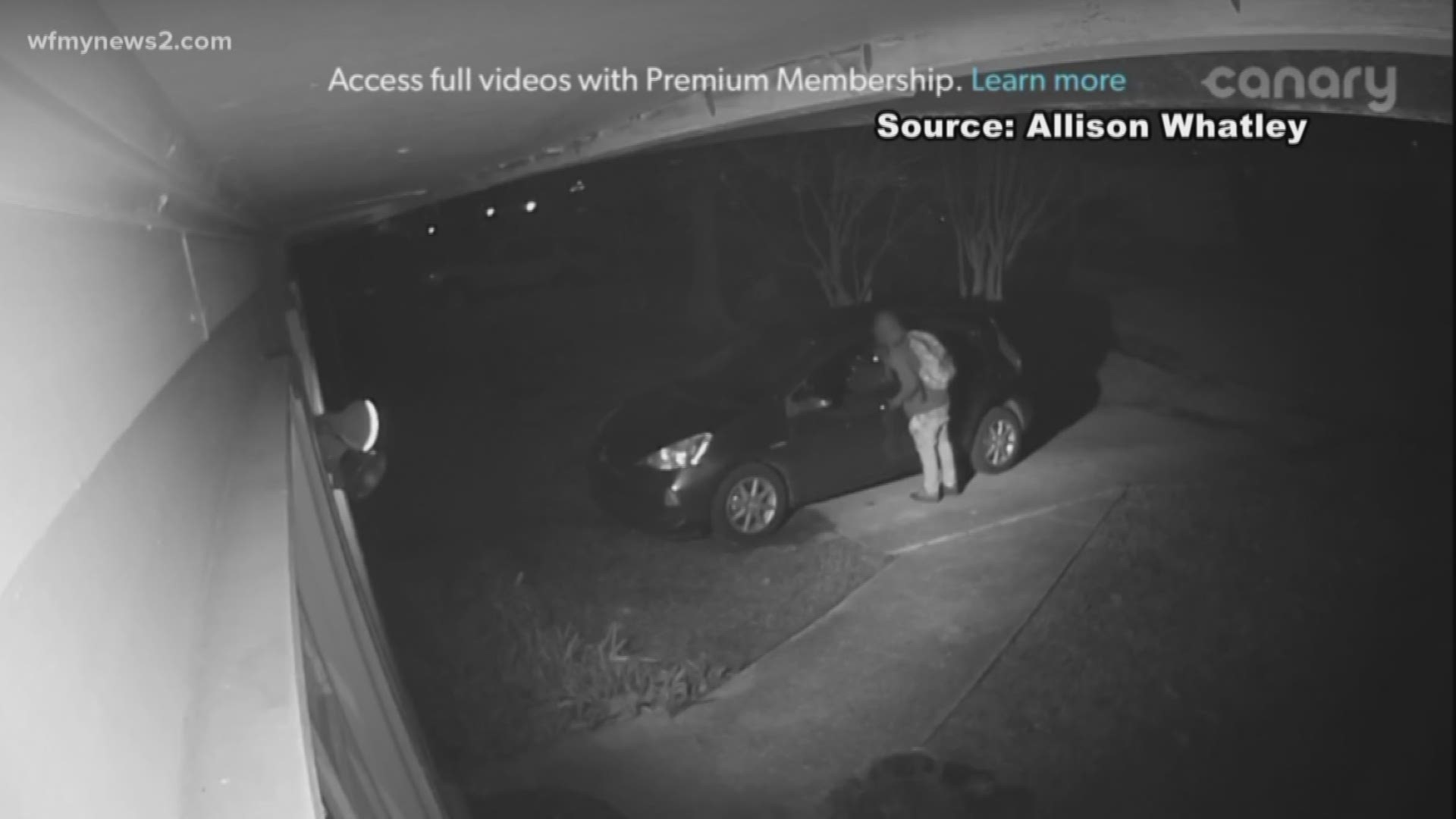 GREENSBORO, N.C. — Neighbors in a Guilford county subdivision have reported a number of attempted car break-ins that were caught on surveillance video.

The neighbors, some of them from communities near Adams Farm and Hunter Hills area, have been discussing and sharing about these incidents on the Next Door App.

One neighbor said that someone tried to get into her car on Thursday around 3:12 am. 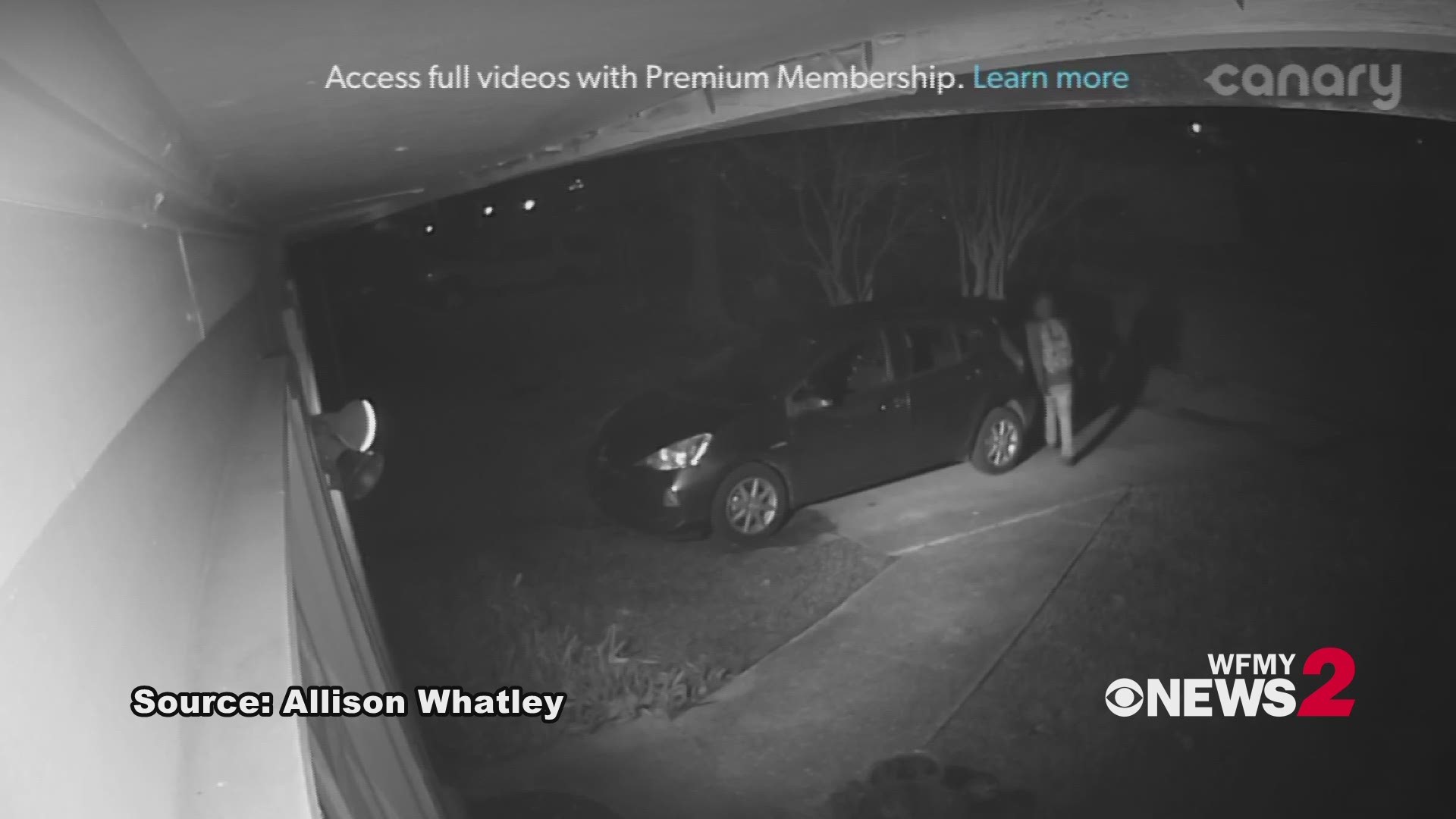 "The video starts off in the dark when a person walks up to my car, which triggers our motion sensor light. The person tries my driver's side door and shines a flashlight to see what is in my car. My car was locked so the person gives up and walks away," homeowner Allison Whatley told WFMY.

Whatley also shared the surveillance video showing the suspect attempting to break into her parked vehicle.

"Luckily, my car was locked and the person appeared to leave by walking into our neighbor's yard," wrote Whatley in her message to her neighbors on the App.

Whatley also posted a screenshot of the surveillance video showing the suspect.

She described the suspect as wearing a hooded sweatshirt with the hood pulled over their head and light-colored pants. The person was also carrying a backpack.

However, Whatley said the suspect returned later on in the morning while they were already awake, but this time was targeting their neighbor's car across the street.

"A little after 7 am, my husband and I were looking out our front window and saw a very similar person attempting to break into our neighbor's car," she wrote.

"We went outside and yelled at the person and they ran away. We also told our neighbor what had happened," wrote Whatley.

She advised her other neighbors to check their security cameras because the suspect may have also attempted to break into cars over the 4 hour period between the first time he was spotted on the camera and when they scarred him off.

Whatley said she called the Greensboro Police's non-emergency number to file a report about the incident.

Another neighbor also posted about a similar incident caught on surveillance. He wrote that two suspects attempted to enter his vehicle around 1:14 am on January 6th. A homeowner on Ravenwood Drive also said someone broke into their car on January 13th and multiple items were missing from the vehicle. Both homeowners reported the incidents to the police.

"Most of the larceny from auto incidents we see are vehicles left unsecured, or something left in the vehicle to entice someone to break in," said Ron Glenn of the Greensboro Police Department.

"We always advise people to make sure to remove valuables from your vehicle and lock the doors. In addition, we advise people not to leave spare keys for another vehicle in your car, as that may make the other vehicle vulnerable to a break-in as well," he added.

Greensboro Police also advise to always call 911 when you suspect a crime or suspicious activity is in progress. While they don't advise confrontation, Police say use good judgment in assessing whether the option of confrontation would jeopardize or endanger your safety.

RELATED: Rowan County man arrested with seven pounds of marijuana in his car

RELATED: A Six Figure Classic Car Up For Auction In Greensboro