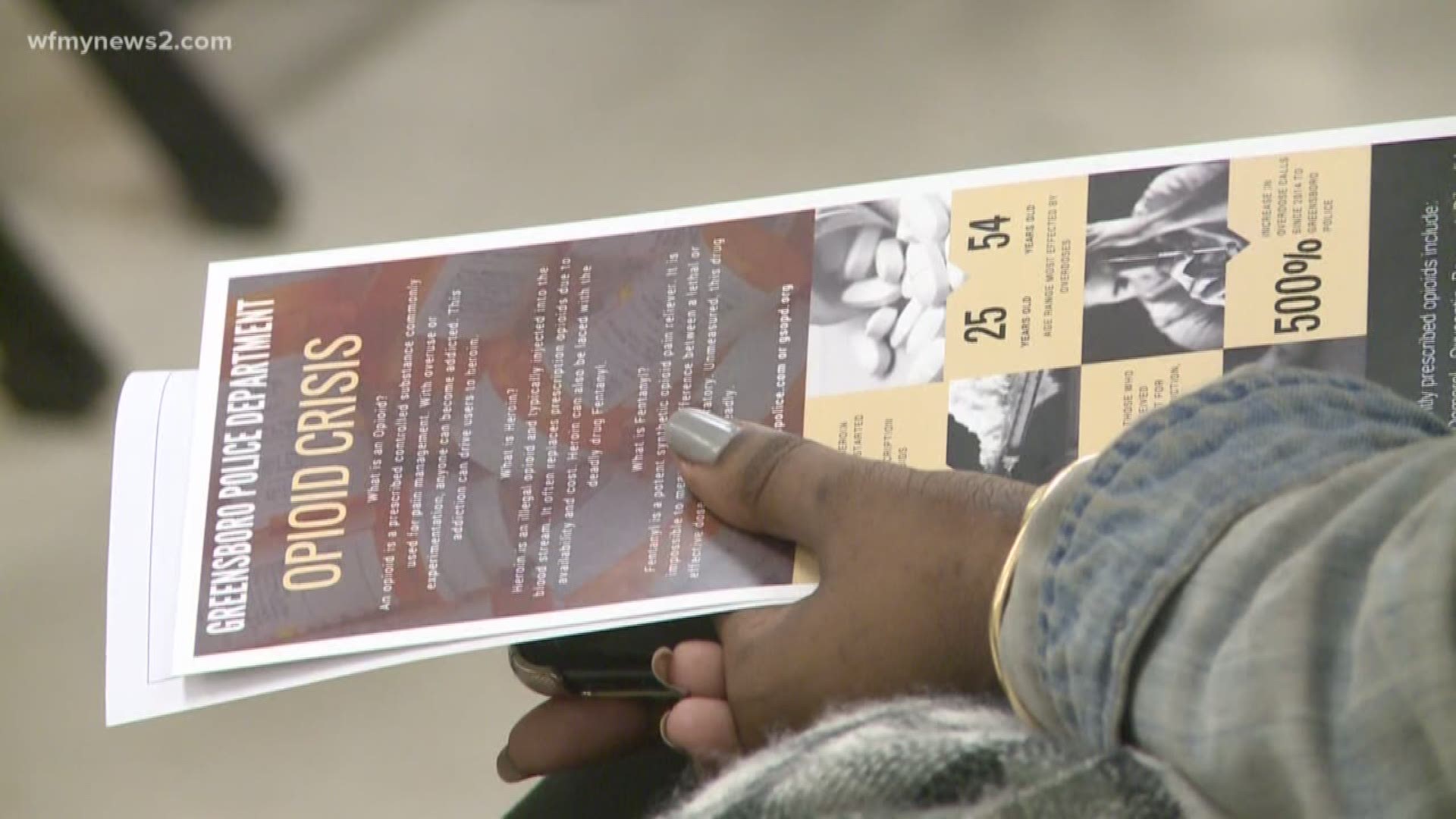 Hinson said in the last five years, Greensboro Police Department (GPD) has seen a 500-percent increase in 911 opioid overdose calls. He told lawmakers that drugs are coming in from other countries like Mexico, Thailand, and Turkey.

To fight the crisis, he says GPD needs to keep working with the FBI, DEA and Homeland Security.

"Without those particular agencies, we would not be as successful as we are. Our task force officers are working with them daily, weekly, gathering intel - and this intel proves to be invaluable because are able to identify individuals, groups, that are bringing these drugs into our community," said Hinson.

Hinson also talked about Greensboro overdose deaths and overdose calls. So far this year, both are on pace to be much higher than last year.

Deputy Chief Hinson says GPD is working with overdose victims to help get them treatment but to also find the dealers.

Read Hinson's opening statement to the committee below:

"Good morning, Chairman Max Rose, Ranking Member Mark Walker, Chairwoman Kathleen Rice, Ranking Member Clay Higgins, and members of the Subcommittee. Thank you for the opportunity to testify before you today. It is an honor to speak on behalf of the many dedicated professionals at the Greensboro Police Department (GPD), Chief Wayne Scott, City Manager David Parrish and Assistant City Manager over Public Safety Nathaniel Davis. As Deputy Chief, I currently serve as the Bureau Commander of the Investigative Bureau of the Greensboro Police Department. I’d had the honor of serving this agency for twenty-eight (28) years and have served in various functions, included but not limited to the Special Operations Division, and as Patrol Bureau Commander.

"The Greensboro Police Department is located in North Carolina and is comprised of six- hundred and sixty-seven (667) officers and one-hundred and one (101) non-sworn employees. Our city has a population of over 290,000 citizens. The mission of our agency is, Partnering to fight crime for a safer Greensboro. Our vision states as the following: The Greensboro Police Department will be a national model for exceptional policing, through our commitment to excellence, selfless public service, and effective community partnerships. I come before you today to discuss the Opioid Crisis.

"An opioid is a prescribed controlled substance commonly used for pain management. With overuse or experimentation, anyone can become addicted. This addiction can drive users to heroin.

"Heroin is an illegal opioid and is typically injected into the bloodstream. It often replaces prescription opioids due to availability and cost. Heroin can also be laced with a deadly drug call Fentanyl. Fentanyl can increase the overall potency that will often result in a stronger high.

"Fentanyl is a potent synthetic opioid pain reliever. It is impossible to measure the difference between a lethal or effective dose outside a laboratory, this drug is deadly. Fentanyl can be disguised as heroin to unsuspected individuals. Some individuals will gain access to Fentanyl and sell it as a very potent Heroin. This is where the majority of overdose deaths occur due to the unfamiliarity with the drug they are actually using.

"80% of all Heroin users have started with prescription opioids.

"70% of all those who have received treatment for Heroin addiction have relapsed.

"There has been a 500% increase in overdose calls since 2014 for the Greensboro Police Department.

"During my 28 years of service, I have witness families being destroyed by this deadly drug often referred to as “Opioids” or “Heroin”, due to overdose or criminal activity leading to incarceration or death.

"In 2018 the Vice Narcotics Division of the Greensboro Police Department has seized over 1,366.65 grams of Heroin and in 2019 from January through June there have been 8,478.80 grams of Heroin seized.

"Federal Law Enforcement Agencies tend to have a small number of Special Agents assigned to their field offices and rely on the assistance of local Law Enforcement Agencies and Task Force Officers to assist in accomplishing their agencies mission. Having Task Force Officers assigned to these agencies provides the ability to more effectively identify persons and businesses that conduct illegal activities that would otherwise go undetected. Task Force Officers have the ability to initiate Federal Investigations to include serving as an Affiant on a Federal Warrant, Federal Indictments, and Federal Court Orders. This allows the local government agency the ability to adopt local cases for federal prosecution.

"These partnerships allow investigations through the Vice/Narcotics Division with the United States Postal Inspection and with the NC State Bureau of Investigation (SBI). Most large scale investigations in our agency involve the cooperation of one or all of the aforementioned agencies. These programs have proven to be beneficial to both the Greensboro Police Department and Federal Agencies for years.

"Currently the Greensboro Police Department has five (5) Vice-Narcotics Detectives that are designated as Federal Task Force Officers with Homeland Security. The primary nature of investigations initiated by Homeland Security and Task Force Officers include financial crimes, gangs, narcotics smuggling/trafficking, and weapons violations. The Detectives in the Vice/Narcotic Division utilize Fusion Centers such as the El Paso Information Center (EPIC) on a weekly basis, especially in the realm of interdiction. The information-sharing centers allow the detectives to quickly run information they are gathering and make a rapid determination if the subjects of the investigation are involved with large scale investigations that are on-going by other agencies. This way the detectives can make contact with the agency currently investigating and maybe able to assist them with gathering information to further their investigation.

"The Greensboro Police Department utilizes a small group in the Vice/Narcotics Division with an  Interdiction Initiative. This group is specifically designed to identify, infiltrate, disrupt and dismantle narcotics trafficking and bulk currency smuggling (narcotics proceeds) organizations operating in the City of Greensboro that utilize legitimate businesses to illegally import and transport narcotics and the proceeds from this criminal activity into and out of Greensboro on both national and international levels.

"The Greensboro Police Department assisted the DEA with providing statistical data on arrests and seizures in our area which ultimately led to this area being classified as a High-Intensity Drug Trafficking Area initiative. Since being formed, the Investigative Interdiction Unit has been very successful in their approach to the detection and arrest of narcotics traffickers who utilize area hotels, motels, shipping corporations, and storage facilities.

"During the month of November 2018, the Interdiction group noticed a pattern of packages being shipped through the United States Postal Service. The interdiction group works closely with the Postal Inspector in the Greensboro area and began an investigation. Through investigative methods, the group developed sufficient information to initiate a Title III (Phone wire) case on a specific group of individuals Trafficking Heroin and Cocaine into the area.

"The group utilized resources from the USPS, DEA, and NC SBI to conduct the investigation. After 6 months of investigation, the group was able to arrest 16 individuals and seize 4 kilograms of heroin, 1.5 kilograms of cocaine, 1.5 pounds of marijuana, 8 firearms, and $128,250.00 Cash. This is a significant outcome for our area especially in combating the opioid epidemic.

"In summation, This Opioid Crisis has left few untouched, with Americans dying every day from opioid overdose. Families are impacted from children being born with neonatal abstinence syndrome or children experiencing trauma as a result of a parent or family member’s addiction.

"Families are being ripped apart because of the opioid’s crisis resulting in higher criminal activity. Partnering law enforcement agencies are implementing solutions and addressing the problem through comprehensive approaches that include but are not limited to educational seminars.

"I thank you for this opportunity to testify before this Sub-Committee."