'They are the soldiers in this war' | Greensboro man raises money to feed 1,000 frontline Cone Health healthcare workers

Maury Kennedy said he had to do something to give back. So he's providing meals from local restaurants to healthcare workers. 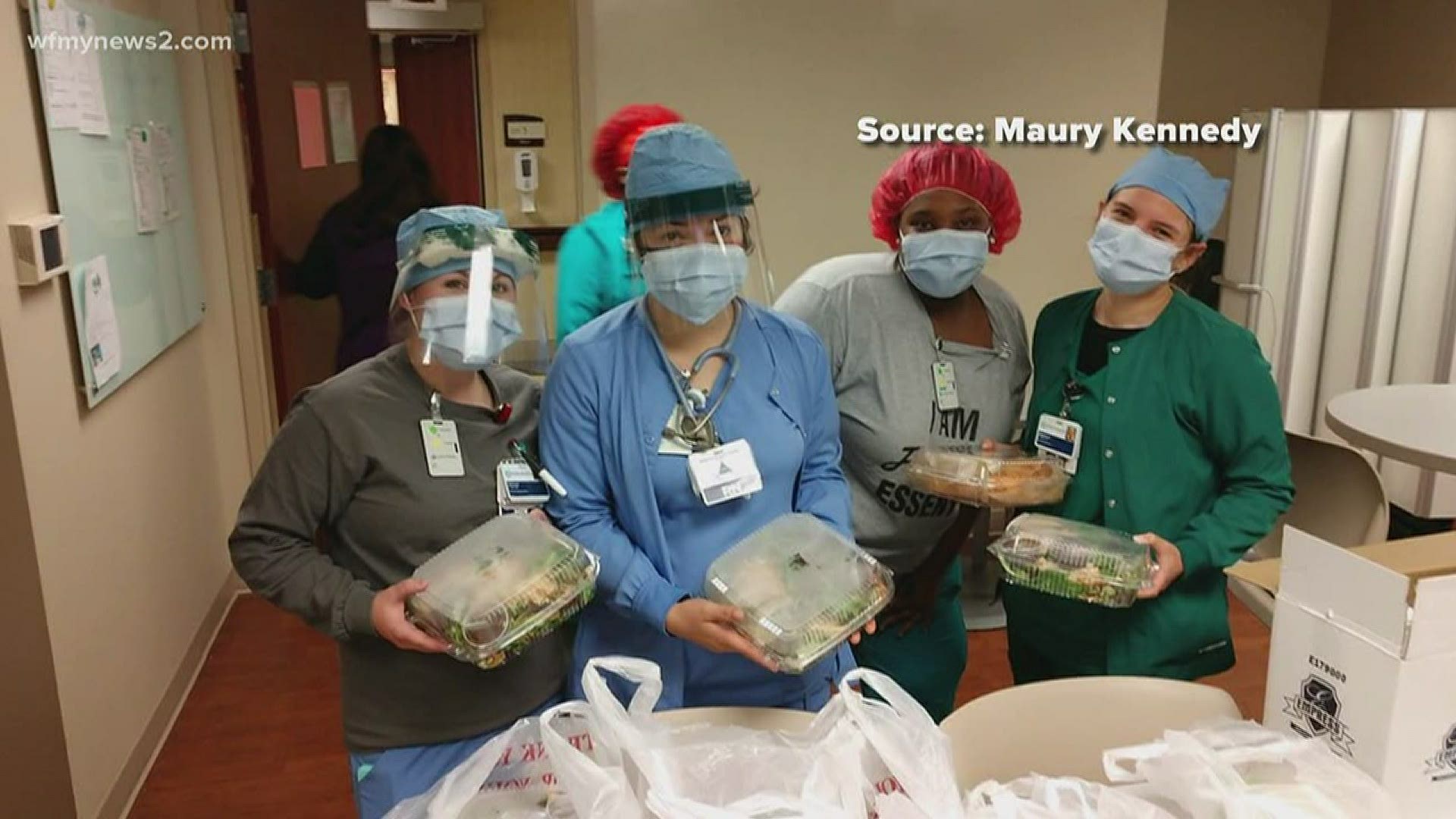 GREENSBORO, N.C. — A Greensboro man and his daughter have started a fundraising campaign to provide meals to healthcare workers at Cone Health hospitals.

After grabbing lunch from Stamey's earlier this month, Maury Kennedy says he drove by a nurse at Wesley Long Hospital.

It was then that the wheels started turning.

"So the idea hit me why not raise money to feed the nurses by buying food from the very restaurants in town who are struggling. Everybody kind of wins for the day," Kennedy said.

So Maury along with his daughter Julia started a GoFundMe campaign to feed frontline healthcare workers. They initially raised enough money to feed 150 people and worked with Stamey's to provide the meal.

"I woke up the next morning and low and behold we had raised enough money to feed the entire hospital again," Kennedy said.

Since then they've partnered with about 9 restaurants around town.
Kennedy said he's refused any discounts restaurants offered while including a 20% tip on the orders.

"Because ultimately we want this entire campaign to benefit local business as much as it puts a smile on a nurse's face," Kennedy said.

The Kennedy's also teamed up with Triad Pawprints, a local t-shirt company, to provide a free t-shirt to everyone who donates. It features the design of local artist Jen Rice. For Julia, being apart of this project holds a special meaning because she's studying to become a nurse.

"It honestly feels amazing because ever since I was younger I always looked up to them and everything they've done for me in any of my family members that's come into an encounter with a nurse," Julia Kennedy said.

Maury Kennedy said the community shocked him in the best way possible.

"We never intended for this to be an ongoing campaign but for as long as the money continues to come in we are going to continue feeding nurses," he said.

No donation is too small in Cone Health's eye who says they are so thankful for how the community has wrapped its arms around their workers.

"Whether you are one person who just sent one meal to a team member one time or you are someone like Maury who's been able to raise resources to do it multiple times, it really does make a huge difference and we are so grateful," Tricia Teter, philanthropy officer for Women's and Children's Services at Cone Health said.

RELATED: Local organization creates a 'drive by thank you' for healthcare workers

RELATED: 'It's so appreciated more than you will ever know' | Woman donates thousands of cookies to essential workers