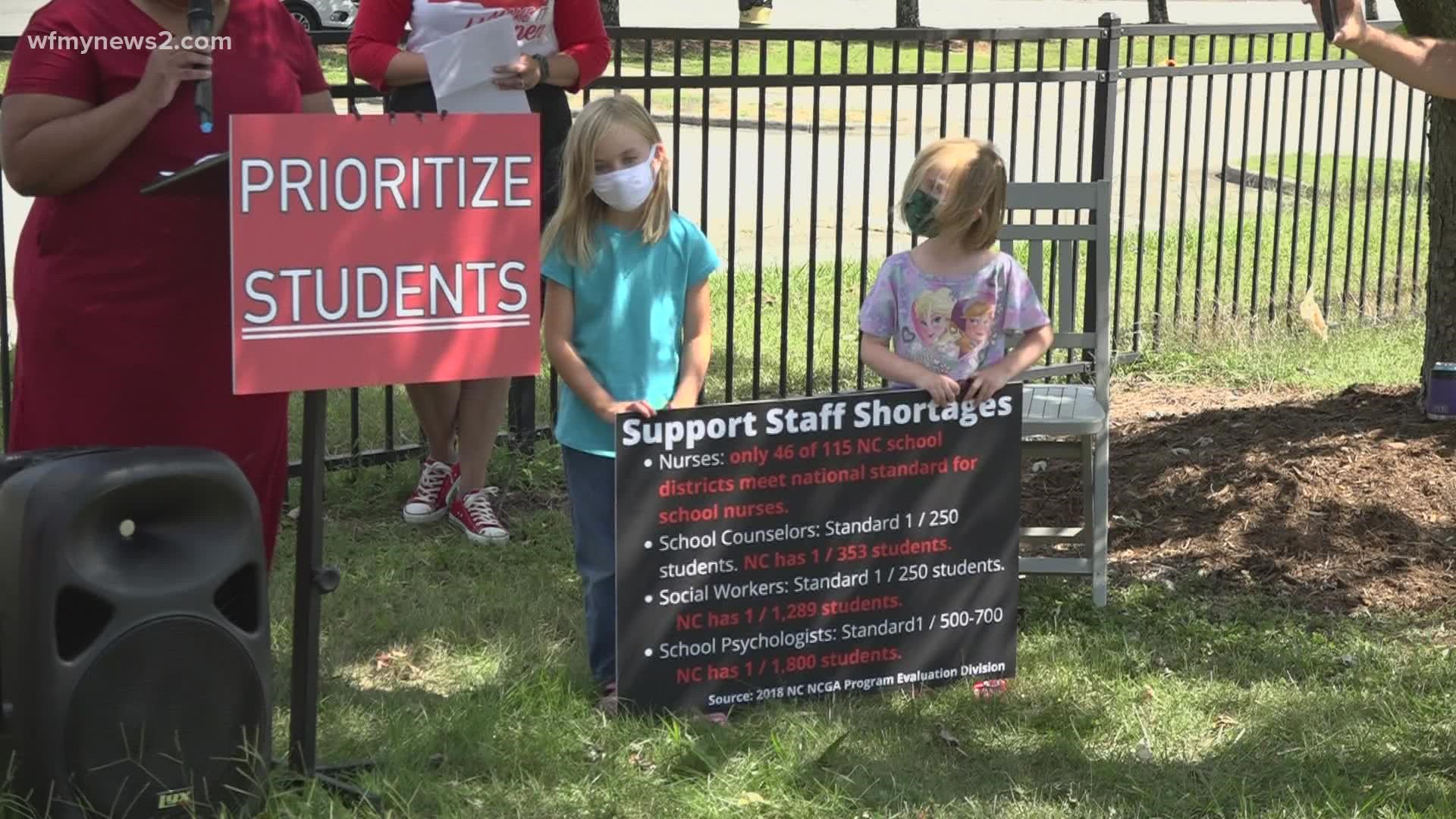 GUILFORD COUNTY, N.C. — The Guilford County Association of Educators held a press conference Sunday calling on state lawmakers to pass the stalled state budget and include increased funding for school building repairs, a support staff pay of at least $15 per hour, and raising teacher pay.

The group included a Guilford County Schools parent, students, teacher, counselor, and librarian. They gathered outside Smith High School, one of three public schools in the district that sent students home last week due to broken air conditioning systems in the hot North Carolina summer heat.

“Today we are asking lawmakers to make a true commitment to our schools,” Kenya Donaldson, GCAE president, said at the start of Sunday’s press conference. “In Guilford County students are losing instruction time due to school closures around our aging buildings and failing HVAC systems."

The two-year state budget was supposed to be in place by July 1. The NC senate passed its plan late June, and the house followed in early August. Besides differences in political opinion, lawmakers have said unexpected billions in tax collections and COVID stimulus money have added complexities to budget planning.

Currently, House and Senate leadership are in negotiations before the budget can be sent to Governor Cooper.

“We ask a school construction bond be put in place on the 2022 ballot for the people of North Carolina to have a voice regarding the state of school facilities,” Donaldson said.

Donaldson also spoke on the shortage of teachers in the state.

“Earlier this summer, the U.S. Department of Education predicted a statewide shortage of teachers in North Carolina,” she said. “Every child deserves a well-qualified teacher in all of their classrooms regardless of where they live and their family income…a staff shortage hurts our students.”

Kirsten Cassell, the parent of a student at Joyner Elementary, spoke about the hazards that faulty air conditioning has created for her children as well as other facility issues..

"We don’t drink the water at Joyner," Cassell said. "There is often mold in the hallways. Pipes have burst and flooded our schools. And the temporary fixes aren't able to keep the school mold free."

"The HVAC system is so old and so broke. It breaks every year. I have purchased multiple fans for teachers over the years. My kids routinely come home hot and sweaty," the mother added. "He became so overheated that he threw up. When I picked him up from school, his skin was warm to the touch, you could tell he felt horrible."

As WFMY reported this past week, Guilford County Schools is handling 700 work orders related to HVAC maintenance, and officials said it could be 10 years before the problem is fully solved due to lack of funding.

Amy Harrison, a special education teacher, said she was speaking on behalf of classified employees including teacher assistants, front office staff, custodians, bus driver, maintenance workers, and cafeteria workers. She called for raising the pay for non-certified school staff to at least $15 per hour.

"The years of low wages have contributed to the approximately 325 classified vacancies," Harrison said.

Shana Richards, GCAE Vice President and Counselor at Virtual Academy, expressed her frustration that the state budget has not yet been passed.

"It is shameful. These are problems that are easily solved. Problems solved by fully-funding our schools," said Richards. "They sit on a 6.5 billion dollar surplus."