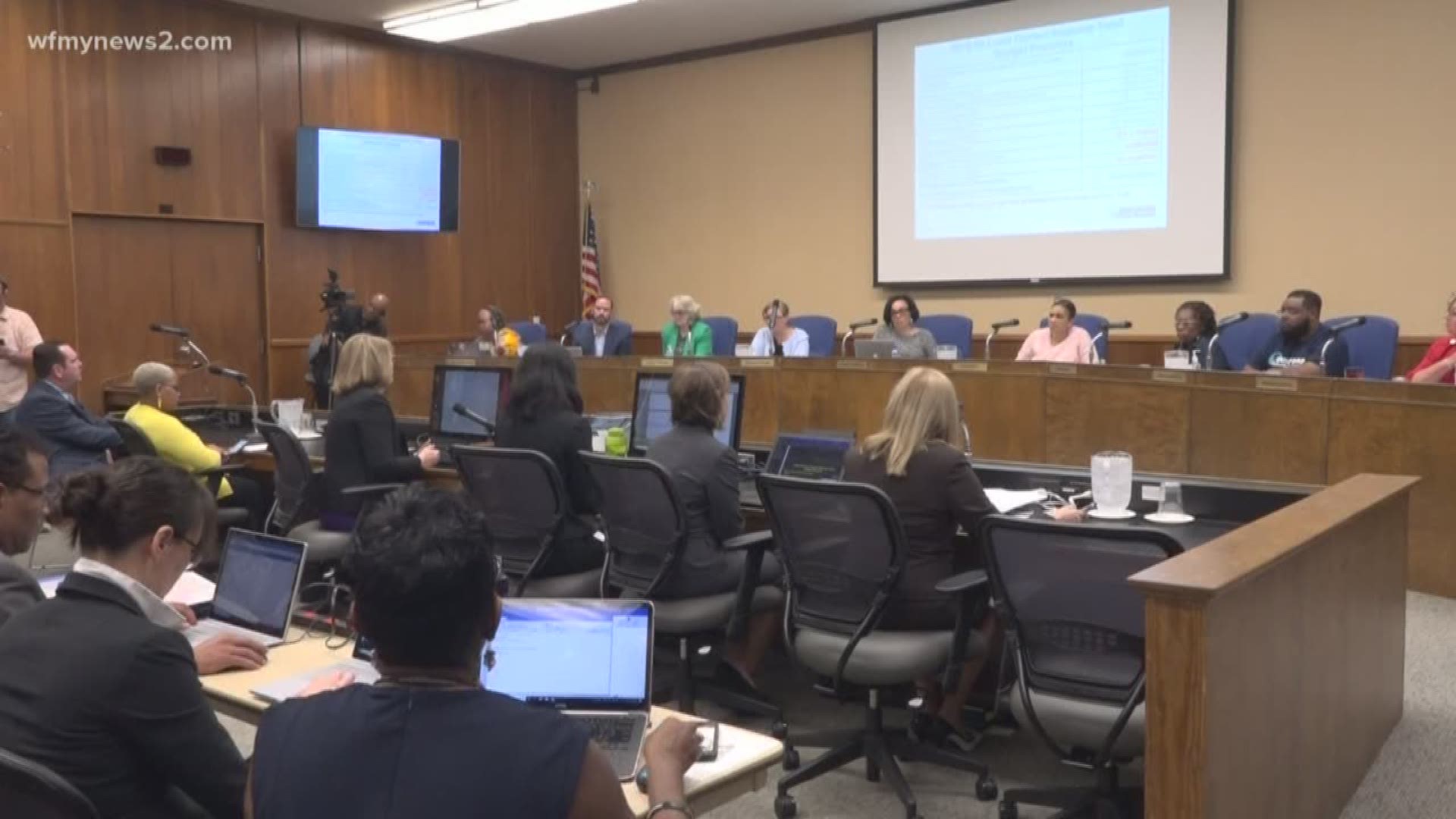 GREENSBORO, N.C. — In a room filled with many parents of special needs children from Gateway Education Center and concerned community stakeholders, Guilford County Schools presented its budget recommendations for the next academic school year.

GCS Superintendent Dr. Sharon Contreras made a case for more funding to be put into the schools for increasing salaries for teachers, bus drivers, school nutrition workers, and other district personnel.

The school system is recommending to the Board of Education that a total capital budget of $767,349,805 be set aside for the 2019-2020 school year. This would include capital outlay, special revenue and enterprise funds. Of these funds, $691,207,166 was allotted to the school system's total operating budget without the special categories.

According to the executive summary of the budget, this distinction is made because Special revenue funds are restricted in purpose and not intended for the general K-12 population in the district, for example, NC Pre-K funds. GCS has two enterprise funds, child nutrition and After-School Care Enrichment Services (ACES). The summary also states that the budget recommendations for the next academic school year reflect the system's strategic plan priorities; increasing compensation, paying for anticipated benefit increases, improving chronically low performing schools, providing literacy and math resources for students and staff, investing in professional learning for educators and sustaining operations.

The key items included in the budget recommendations include a request for additional funding of $10 million from the Guilford County Board of Commissioners for an increase in the districts local teacher supplements, salary increases fro GCS personnel especially teachers and bus drivers.

GCS is also asking for $1 million to improve chronically low performing schools as well as teacher recruitment and retention incentives in those schools.

GCS also wants to cover operations of charter schools due to anticipated growth in enrollment with $2.9 million, $100,00 for an increase in liability insurance and $130,000 for fund balance appropriated in the 2018-2019 budget.

A total of $2.7 million dollars was saved from school consolidation and redirected into the budget recommendations toward employee benefits and teacher retention incentives, a cost of which they said is rising.

"The challenges are that we do not receive enough state funding or adequate state funding to pay for all of our staff and we have a significant number of locally funded," said Dr. Sharon Contreras, Superintendent of GCS.

"Most of our staff are paid from the state but we still have our own, so whenever there's an increase in compensation at the state level, we have to make up for that difference, and there are many more needs than we have funds for and I think that that's not just Guilford County, that's every district in the state," added Dr. Contreras.

Some of those challenges highlighted during the presentation include a decrease in school enrolment. GCS's projected school enrollment for 2019-2020 is 71,926. That figure is 0.5% less than the projection set for the current school year.

Also, key in the recommendations was the issue o addressing poor building conditions.

According to a January facilities report GCS schools are falling apart or aging out, and 3 schools had to be shut down due to tornado damage sustained in April 2018. GCS is requesting $12 million be allotted to upkeep and repairs more than 12 million square feet in facility space. These funds would be spent on HVAC, roofing and electrical projects, as well as equipment. Last year, GCS received $6 million for capital outlay, giving the district 50 cents per square foot for maintenance needs.

"The facility study recommended $1.5 billion to renovate or repurpose a lot of our buildings. Areas of concern are deferred maintenance and we are trying to address that with the $12 million requested," said Angie Henry, the  Chief Financial Office for Guilford County Schools.

GCS would also no longer consider Hampton Elementary as a separate school with its own principal. Hampton Elementary was one of three schools severely damaged by last year’s tornado and was relocated to Reedy Fork Elementary. The other two damaged schools, Peeler Open Elementary, and Erwin Montessori would remain in their current locations at Bluford STEM Academy and Alamance Elementary, respectively.

"We are doing the best we can to serve all of our students with very limited resources," added Henry.

In addition, GCS says it will re-envision the Twilight high school program,  so as to serve more students. Twilight is an evening program for graduating students who need flexible hours, a self-paced curriculum and more support. The program serves 63 students in one location at a total cost of $750,000, but with the new recommendation, 240 to 300 students would be added to the program. The program will run out of Jackson Middle, Pruette SCALE Academy, and Southern High which GCS suggests data indicates proximity to a higher number in previous drop-outs levels.

SCALE Greensboro, an alternative school, would move to Washington Street administrative building while some administrative staff would work out of the former McIver Education Center to save cost.

Contreras and some members of the school board also apologized for the angst created over the handling of communicating recommendations to close the Gateway Education Center.

The school board meeting lasted under 2 hours with Henry doing the bulk of the presentation with a board members question and answer session that followed.