How schools keep students safe: Inside the day-to-day efforts of SRO's

School resource officers have a daily routine to make sure students are safe in Triad elementary, middle and high schools. 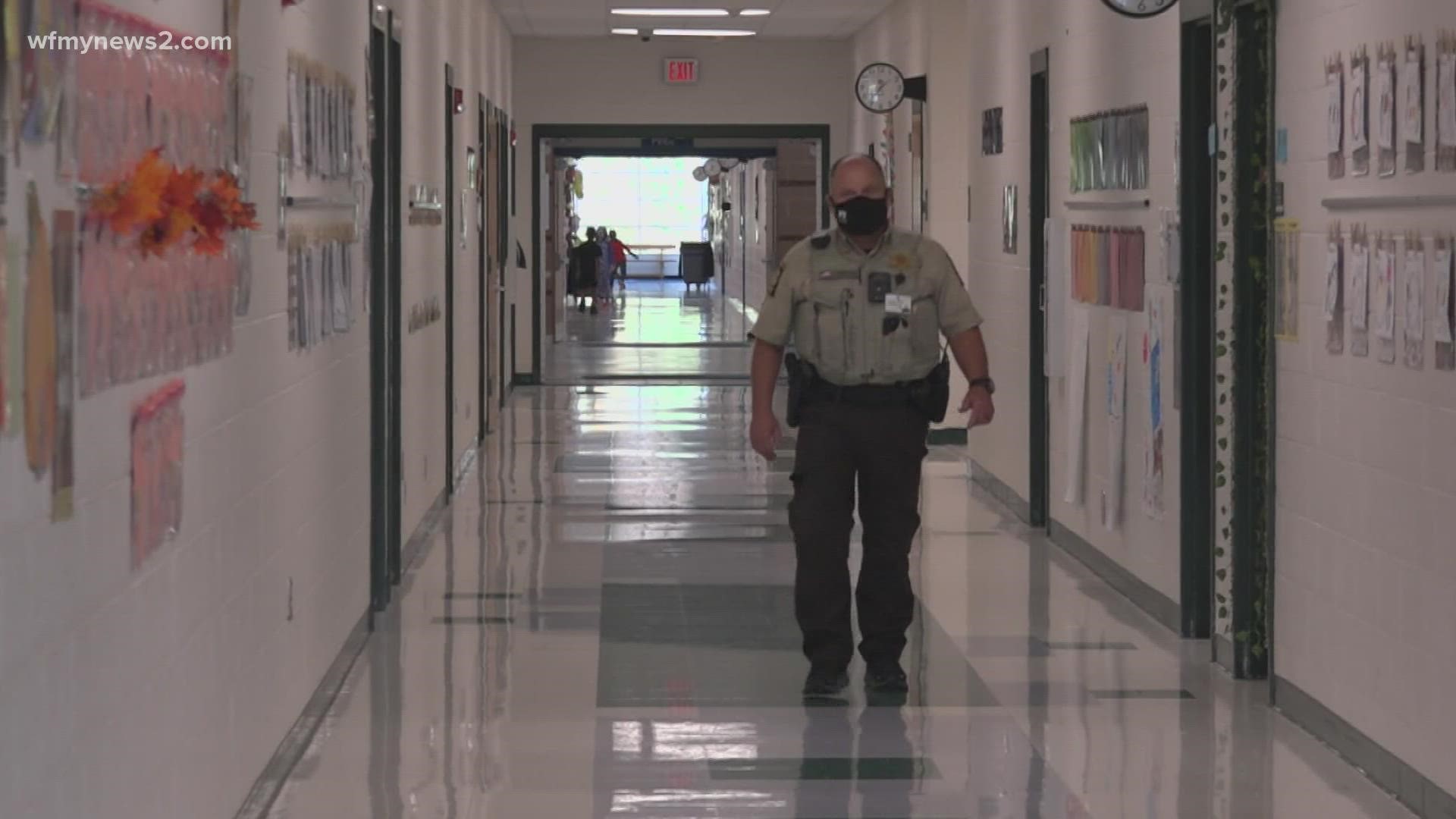 ROCKINGHAM COUNTY, N.C. — The return to school after remote learning brought back the fear of violence in the classroom.

The Triad saw those fears realized when a student died after a shooting at Mount Tabor High School in Winston-Salem.

In the two months after, more weapons were found on campuses and lock downs had many wondering what is being done to keep schools safe every day and during crisis.

Behind the daily learning inside schools like Bethany Elementary School in Rockingham County, there's a different routine for those charged with keeping students safe.

"It's a different way of thinking," said Deputy Joey Robertson.

Robertson is an Elementary School Resource Officer, one of two in Rockingham County Schools. He splits his time at three of six elementary schools, Bethany Elementary is one of them.

"I make sure the doors are locked, that's the easiest way than an intruder could get into the building is through the doors," Robertson said.

It's a role the county Sheriff's Office only had for middle and high schools ten years ago.

The change came after the Sandy Hook school shooting, when a gunman entered an elementary school in Newtown, Connecticut in 2012, killing 20 first graders.

He believes being a visible security presence among these younger kids also encourages them to trust law enforcement as they get older.

"You don't have to ask the kids what's going on, They will tell you," Robertson said. "They will come up to you and hug your neck or hug you around the waist and they are glad to see you."

Rockingham County is not the only place that changed school safety in the last 10 years. The state created the NC Center for Safer Schools after Sandy Hook.

"We work with [districts] on anything that they think they need as it relates to safety," Karen Fairley said.

Fairley directs the Center for Safer Schools inside the Department of Public Instruction. The center provides districts with $18 million of funding for school resource officers across the state.

"It could be things that lock the doors, it can be camera equipment," Fairley said

It also offers trainings to better prepare districts to deal with mental health and critical incidents, ranging from active shooters to severe weather.

A preview guide for one training aimed at school administrators and staff along with public safety personnel explains there are four phases of crisis planning.

The center helps districts put those safety plans in place. Fairley said schools face a new safety challenge to those plans as students return to the classroom after a year of learning from home due to the pandemic.

"Just getting back to the discipline of being in the classroom," Fairley said. "There has to be some apprehension as it relates to COVID in general, so I think sometimes [students] hear things on the news and it may be a little frightening."

The Mount Tabor High School shooting rocked the confidence of many parents after police said a student shot and killed a classmate.

According to the nonprofit, Everytown for Gun Safety, there have been at least 139 incidents of gunfire on school grounds across the country in 2021. Ten of those happened in our state.

In Winston-Salem/Forsyth County Schools, law enforcement leaders hope K-9 Hondo and Deputy Todd Justice can find guns on campus before they are used.

Hondo can sniff out guns and is the only dog of his kind in the Triad. He cost the Forsyth County Sheriff's Office more than $40,000 to buy and train him. He and Deputy Justice split their time between 25 middle and high schools in the district.

"Our hope is that if you never know when we're gonna be on your campus, you're less likely to bring a firearm," Justice said.

The community is also a big part of the solution. Six guns have been found on the district's campuses this school year, mainly from faculty and students reporting tips.

Fairly said school resource officers like Deputies Robertson and Justice are a big piece of the prevention puzzle for school shootings.

"These precautionary measures are a help in the event something happens," Fairley said.

Safety experts said another big piece is for parents to be informed and know what their schools' safety plans are.

Being safe at school also requires some work at home. School resource officers said strong relationships between parents and their children can help students feel more comfortable speaking up when they have concerns.