A day after they arrived in Mexico, Noah Rudolph and his girlfriend were scrambling to get back home. 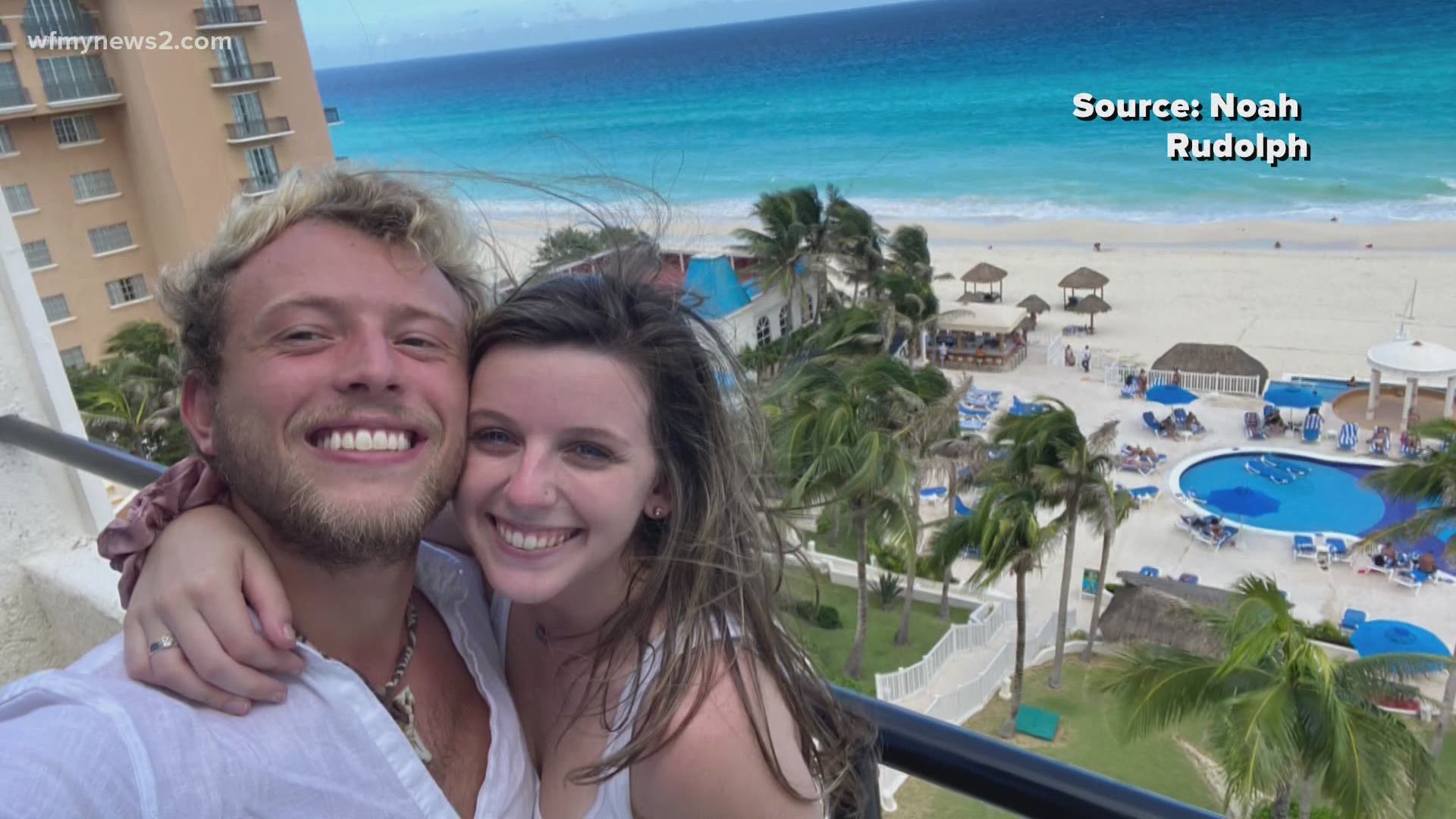 GREENSBORO, N.C. — A High Point man who found himself in the path of Hurricane Delta is on his way back to the Carolinas.

Less than a day after arriving in Cancun, Mexico he and his girlfriend realized they needed to get out fast.

"My phone said Category 4 and my dad blew my phone up. I had like eight missed calls, four text messages talking about, 'you need to get out. Get out, get out,'" Noah Rudolph said.

Clear skies and blue waves still surrounded him but he couldn't ignore the forecasts he saw.

"I went to school at Wilmington, I've ridden out hurricanes before," Rudolph said, "This is no hurricane to ride out."

The vacation was a surprise for his girlfriend, Lexi Becraft and a belated graduation trip for both of them. The two graduated from UNC-Wilmington in the spring and Rudolph's original plan to take a family trip were cancelled due to the pandemic.

Rudolph booked the tickets through a travel agency over the summer when he saw low prices. They arrived late Monday before mandatory evacuation orders were issued for resorts like theirs the next day.

The couple knew they had to get out but getting back home wasn't easy.

They arrived at the airport Tuesday only to find out the flight they thought they were boarding was departing from a different airport.

"We checked literally every single airline at that Cancun airport to try to find any flight out of Cancun and there was nothing," Becraft said.

They worried they would have to go to an evacuation shelter but they decided to keep trying.

"(We)had to wait at the airport all day and watch all these other flights take off and watch the weather change, so I was freaking out," Becraft said.

"I was like I don't care where you take me, just get me into America. Get us out of this city and get us away from this hurricane," Rudolph said.

With help from their travel agents, added flights and a little luck they boarded a plane late Tuesday afternoon.

"They were like, we're happy to be here on this rescue mission to pick you guys up. When we all touched down in Dallas everybody in the plane started cheering," Rudolph said.

After spending the night in Dallas, the couple flew back to Charlotte Wednesday. They're on their way to a different coastline--Myrtle Beach.

"It was always part of the plan to self-quarantine in Myrtle after the trip anyways," Becraft said.

It's not the trip either of them hoped for but they're relieved to be out of the storm's path.

"It's like going from a five-star resort to a two or three-star resort. But you know what? We're happy because we made it out safely," Rudolph said.

Rudolph said he spent about $750 per ticket for the trip. He's hopeful he will be able to get that money back. The couple hopes to return to Cancun again soon.

Hurricane Delta is expected to arrive along the U.S. Gulf Coast later this week.

RELATED: Hurricane Delta weakens over the Yucatan; will strengthen in the Gulf; Could bring rain to NC this weekend