'I Kept Praying': Woman Trapped in Car in Floodwaters Explains How She Survived Without Cell Phone to Call 911

A woman who was rescued after being trapped in her car, surrounded by floodwaters, spoke with WFMY News 2 about the near-death experience to warn other drivers. 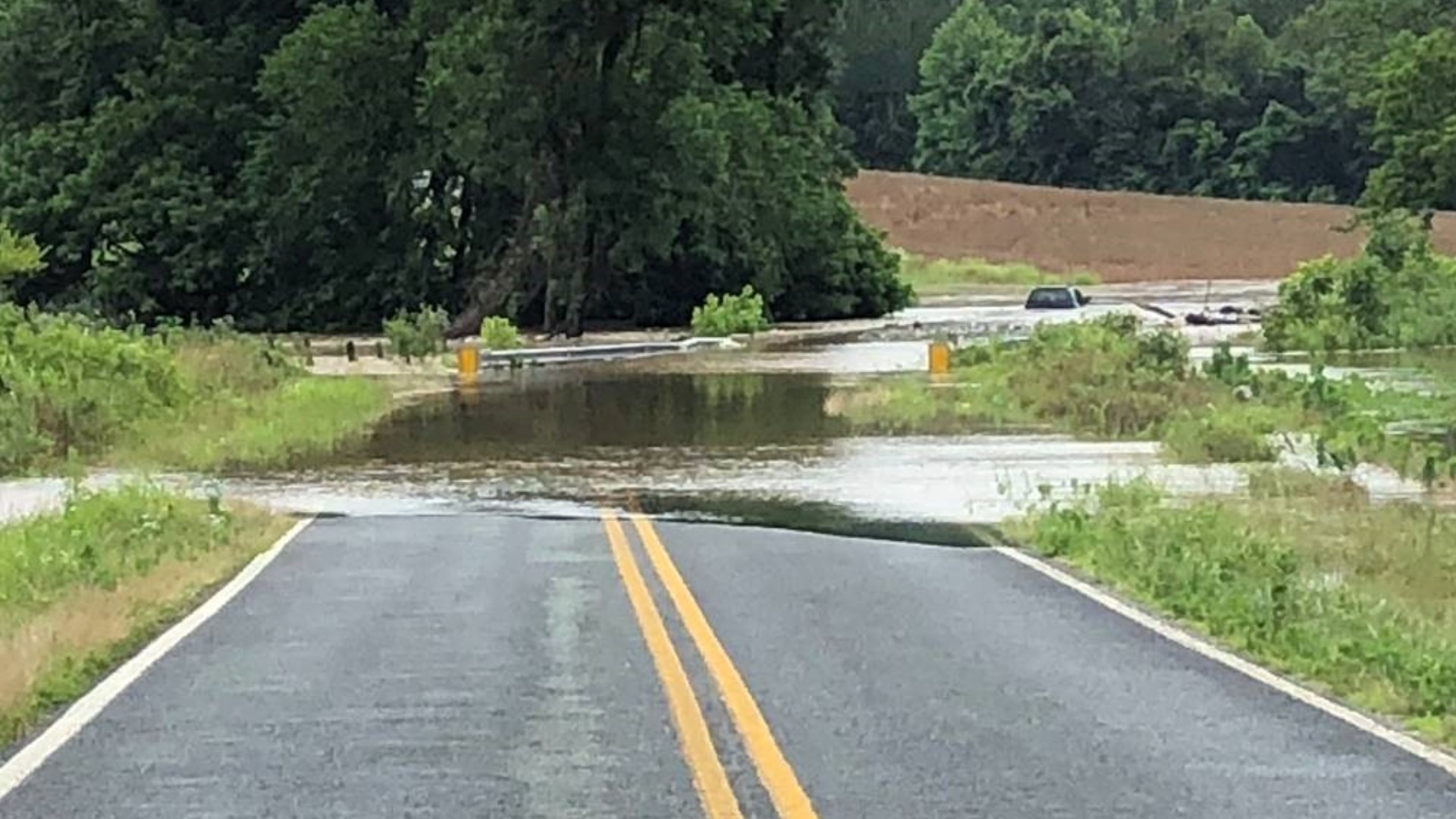 GIBSONVILLE, N.C. — A woman who was rescued after being trapped in her car, surrounded by floodwaters, spoke with WFMY News 2 about the near-death experience to warn other drivers.

On Saturday morning, Sharan Varner loaded up her car with plants and her dog Brickles to visit her daughter and granddaughter, whose car was totaled in a wreck the day before.

"I really am a very cautious driver. And I do not speed. And am really worried about making sure I'm safe," said Varner, who lives in Reidsville in Rockingham County.

But even her cautious approach was no match for the floodwaters from Buffalo Creek, which spilled onto a bridge on Huffine Mill Road in Gibsonville.

"When I got to the bridge, it just looked wet, so I proceeded very slowly, no problems," said Varner. "But I guess the way the light was hitting my windshield and my eyes, I thought the road was just wet."

When Varner realized the water was actually several inches deep, she tried to back up and turn around.

But it was too late. The water, which was becoming a rushing river, swept her car away and trapped it against a guardrail on the bridge.

"I was stuck at that point. Marooned in sea of water," said Varner, who said she doesn't know how to swim very well.

Helpless, Varner and her dog sat in the car, watching as the floodwaters began to rise as the rain continued to fall.

Varner does not own a cell phone, so she could not call 911. Without a way to call for help, Varner leaned on her faith and began to pray.

"I was praying, and nobody was coming, and I was there, and I thought, nobody is going to come down this road, so I kept praying, and I kept saying, 'God you need to hurry up,' because the water was pouring into my vehicle, it was getting higher, the dog had jumped over to the seat behind."

Fortunately after about 30 minutes, another vehicle driving nearby spotted her car trapped underwater.

"I shoved my arm out the window and I waved like crazy like 'Please somebody is in here,' " said Varner, who continued to wave at the vehicle in hopes that the other drivers would call 911 to rescue her.

"I can't tell you, it seemed like forever, and finally the first responders kept coming from both angles," said Varner.

Using a life raft and a rope, first responders pulled Varner and her dog Brickles to safety.

Shaken up and exhausted, Varner and Brickles went home without any injuries. Varner said she places her thanks in God.

"I want to warn people if they see any kind of water to be very cautious, because sometimes the road only looks wet, which is what it looked to me this morning, but as I got right up to it, it wasn't it just wet, it was a raging torrent that nearly took my life," said Varner.

'The water is stronger than you'

Thomas said the water Varner encountered was from Buffalo Creek, which was starting to crest. McLeansville firefighters and Guilford County Rescue Squad dive teams worked to get her out.

RELATED: 'The Threat Isn't Over' | Flooding Threats Continue Across the State: Gov. Cooper

As of 6 p.m., the water had begun to recede, but the car remained stuck as water levels reached the windows.

"The water is stronger than you, it will pick your car up and it doesn't take a whole lot of water to do it," said Thomas.

The woman was given a careless and reckless driving ticket, which is a new protocol for N.C. State Highway Patrol, said Thomas.

Neighbors say the road that flooded Saturday is a known danger for locals.

The road floods "every time it rains," said Red Justice, who has lived near Huffine Farm Road almost his entire life. He arrived on scene shortly after the woman and her dog were pulled to safety.

"There needs to be something done. We could lose people right here," said Justice.

The flooded road is next to farmland and pastures for cows. Justice said his family and neighbors who farm the land suffer every time it rains and floods like Saturday.

"It's bad on the farmers, because they have stuff planted out here already, and it's going to wash it away," said Justice. "They have redone all these bridges but they don't keep them up. It will take a day to clean up all the trash from the bridge."

He urged the public to not take risks, because it also places the rescuers in the line of danger.

"If you've got to go through more than an inch, inch and a half of water, or it's moving across a road on a bridge covered, don't even try it. Because it doesn't take a whole lot of water to pick up my car and move it," said Thomas.

Watch firefighters swim through flash flood, save driver being carried away

Flooded Interstate? Now What? You Can't Turn Around!