It's Official: Aycock Middle To Be Renamed After Melvin Swann

After a long debate over changing the name of Aycock Middle School, Guilford County School Board leaders plan to vote Thursday on renaming the school after Melvin 'Mel' Swann, Jr. 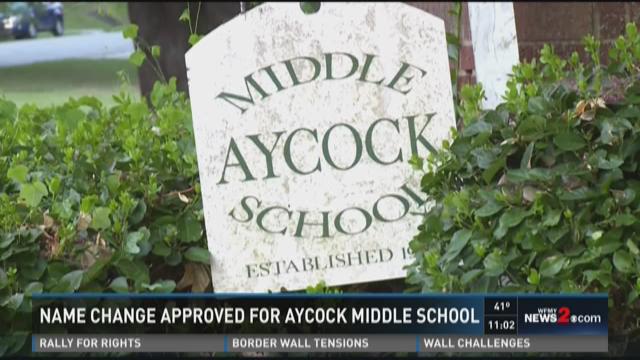 GREENSBORO, NC – After months of debate and discussion, the Guilford County School Board approved for Aycock Middle School to be renamed after the late Melvin 'Mel' Swann, Jr.

Swann worked in education for more than three decades and served as a deputy superintendent for Guilford County Schools.

The GCS Board approved the name change during a meeting Thursday night.

.@GCSchoolsNC board hearing from Swann family, community members as to why Aycock Middle School should be named after Melvin Swann @WFMY pic.twitter.com/VIP1umPNDv

The GCS Board voted last year to change Aycock Middle's name. The school was named after Charles B. Aycock, who served as Governor of North Carolina from 1901-1905. He was known as the "Education Governor," but was also an advocate for white supremacy and segregation.

School leaders received numerous letters in support of changing the school's name to Swann who has many ties to the school district.

The school district said, “His service through the school district and community boards earned him numerous recognitions, including the North Carolina Order of the Long Leaf Pine, a Certificate of Special Recognition for Outstanding and Invaluable Service to the Community, and the Guilford County Association of Office Personnel Administrator of the Year.”

The name was selected out of a list of more than 100 names submitted by people in the county.

Swann's granddaughter, Leah Swann, works at Claxton Elementary as the ACES Coordinator, and says she was a product of the work her grandfather put into the school system.

"Growing up - it's real neat to know that your grandfather has a hand in your education, and activities, and curriculums," said Swann, "[The new school name] just means so much to his legacy."