He has stage four pancreatic cancer, but it doesn't stop him from hitting the field and telling his girls to "get after it." 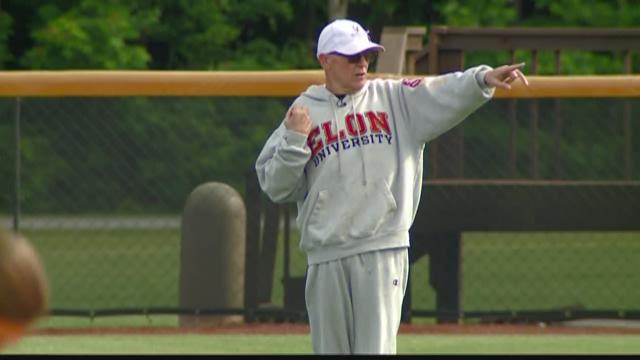 WELCOME, NC – “You need me to come in there and hit those for you? Well, let’s hit it!”

North Davidson Head Softball Coach, Mike Lambros, yelled across Lambros Field. Yes, the field is named after him. It’s appropriate, seeing as though he’s been their coach for 36 years.

As you watch him walk across the field, coaching his girls, you wouldn’t be able to tell he’s locked in a battle. Not the one he’s seen hundreds of times during game time. But, a personal one.

And just a couple of hours before heading out to coach practice on Tuesday afternoon, he sat in a hospital receiving chemotherapy.

And in true coach fashion, he smiled at News 2’s camera and said, “I’m late!” when showed up two hours after practice started.

“They have been my medicine along with my family to help me to get through this and to go and to be here today. Had chemo today, but I was coming to practice,” said Lambros.

The legendary coach was diagnosed in August of 2016 and has only missed one semi-final game, due to his illness. But, even with the one absence, his presence was missed.

“I guess the last game was pretty hard for me knowing that he was sick and in the hospital,” explained Assistant coach Kevin Berkley. “I didn’t want us to lose and be done and him not be here.”

Berkely has known Lambros for 14 years, and worked with him for three of them. He, like many coaches on staff, have helped step into Lambros’s shoes, while the team has made an extra effort to play their best game.

“We talked about this as a team months ago. The life lessons that the girls have learned his year through battling cancer with coach, cause they’ve been with him day by day and through this season.”

This year, the softball team is headed to the state championship. It’s the second time in four years. During a huddle, Lambros reminded his team to pay attention and work hard to secure the top spot.

But, Lambros doesn’t have to tell him team to win. They plan to do it…in his honor.

Another senior, Autumn Stover agreed, “Him coming out here and being a part of this has really made us want to fight even more just as much as he’s fighting for us.”

He’s become their inspiration and they became his in return. Lambros said the girls call to check on him and truly care about where he is and what he’s going through. In fact, being on the field during a hot May afternoon telling his girls to “get after it” is what helps him fight the disease creeping through his body.

“It helps you go from one level to another and stay fired up is I guess what you would say. I can’t imagine not being here, sick or not.”

What’s his prognosis? Lambros looked down at his dirt covered shoes and shifted his answer back to the upcoming championship.

“Many people walk around going woe is me woe is me. Nah, I don’t have time for that. Listen to the joy out here and that’s your medicine. That’s the one chemo drug that they can’t give you that these kids give you every day.”