Watch "Lydia's Bridge" -- the story behind one of North Carolina's most famous ghost stories -- Sunday on WFMY News 2 at 11. 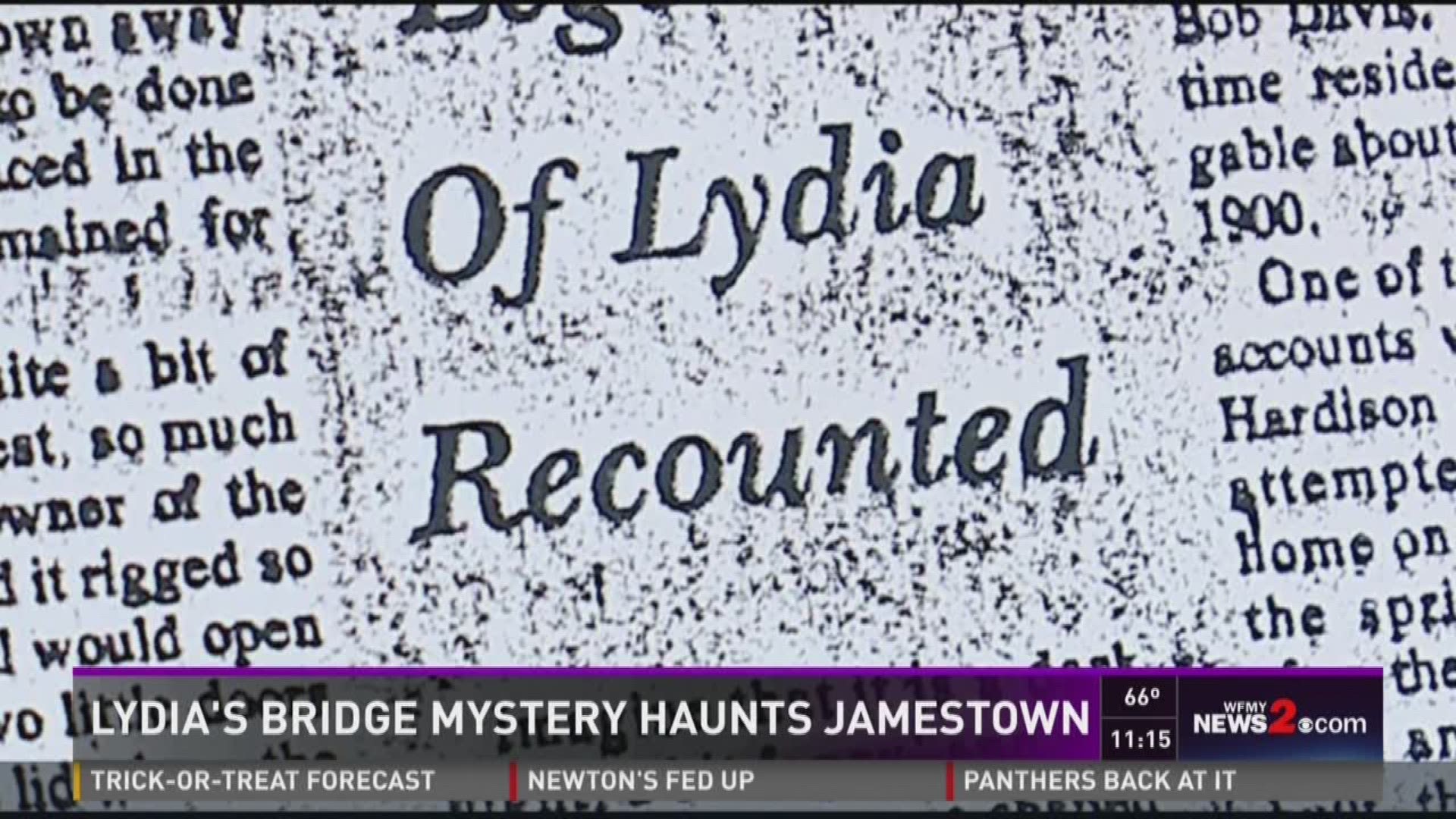 JAMESTOWN, NC -- Every town has its own urban legend -- a bridge between history and haunts.

In 1920, Jamestown's story started near present-day Main Street, in a place now tucked away in overgrown grass along a dead-end road. It's called Lydia's Bridge -- the site of one of North Carolina's most famous ghost stories.

"Lydia was on her way back from prom. I believe she was running late. It was a foggy night, and when they ran around the corner, they got into a crash under the bridge. She got out of the car and tried to frantically wave down any driver who would stop. Unfortunately, she was unsuccessful," explained haunted historian Dan Riedel of Carolina History and Haunts.

Riedel grew up in Jamestown and has known about the Lydia legend since high school.

"A year after her death was the first reported haunting of Lydia. Drivers would drive down this road, claim they would see a nice girl in a dress waving down a car. She looked like a hitchhiker, so they would stop. When they got to the area of her house, they got out to open the door, and she'd be gone," Riedel explained.

Similar accounts over the years have been well-documented at the Jamestown Public Library.

"We have people come by here all the time wanting to know where the bridge is and all the stuff we have on Lydia, so we pull all that out for people to review and go over," said library director Joy Cecil-Dyrkacz.

The story has a well-known name, but the biggest mystery is the name of the girl in the story.

"When you go look back into history and death certificates and everything, you're not very successful finding a Lydia who died in this area – especially with her age," Riedel said.

That's why local author and ghost hunter Michael Renegar has several different theories about who might haunt that bridge.

"We checked death records from 1900 to 1938 looking for the name Lydia. So, I began to think it's either a myth or her name was something else," Renegar said.

He came across an old Greensboro Patriot article dated June 21, 1920 -- a date consistent with the time period for the Lydia legend. The article is about a fatal car crash that happened the night before.

"It was a rush job with misspellings, mistakes. Four people were in the car, and they were on High Point road. The car lost control on the rain-slicked road and overturned. This young woman was thrown from the car, hit her head and died almost instantly. But her name was not Lydia... her name was Annie L. Jackson."

Jackson's death record shows at the time of the crash, she was 30 years old and lived in Greensboro. Renegar found out her address matches that of an old boarding house. So, he believes the car was traveling toward Greensboro -- not High Point -- the night of the crash. He thinks that piece of the puzzle explains why a ghost still lurks there, because she's still trying to get home.

"She's on the side of the road, as if she wishes to be taken to High Point. Of course, Annie (Jackson) realizes we're going the wrong way again! And, she disappears."

But will solving the mystery spoil the story?

"The story resonates with people. Everyone wants to go home. If this is Annie (Jackson), and the mystery is solved...maybe she can move on and not be there anymore, though the story will still be there."

Stay on top of News, Weather, Sports by downloading WFMY News 2 apps or signing up for our text alerts.

Get the WFMY News 2 Weather and News App