For one day only, a 9/11 Never Forget Mobile Exhibit is stationed at the U.S. Army Heritage and Education Center in Cumberland County. 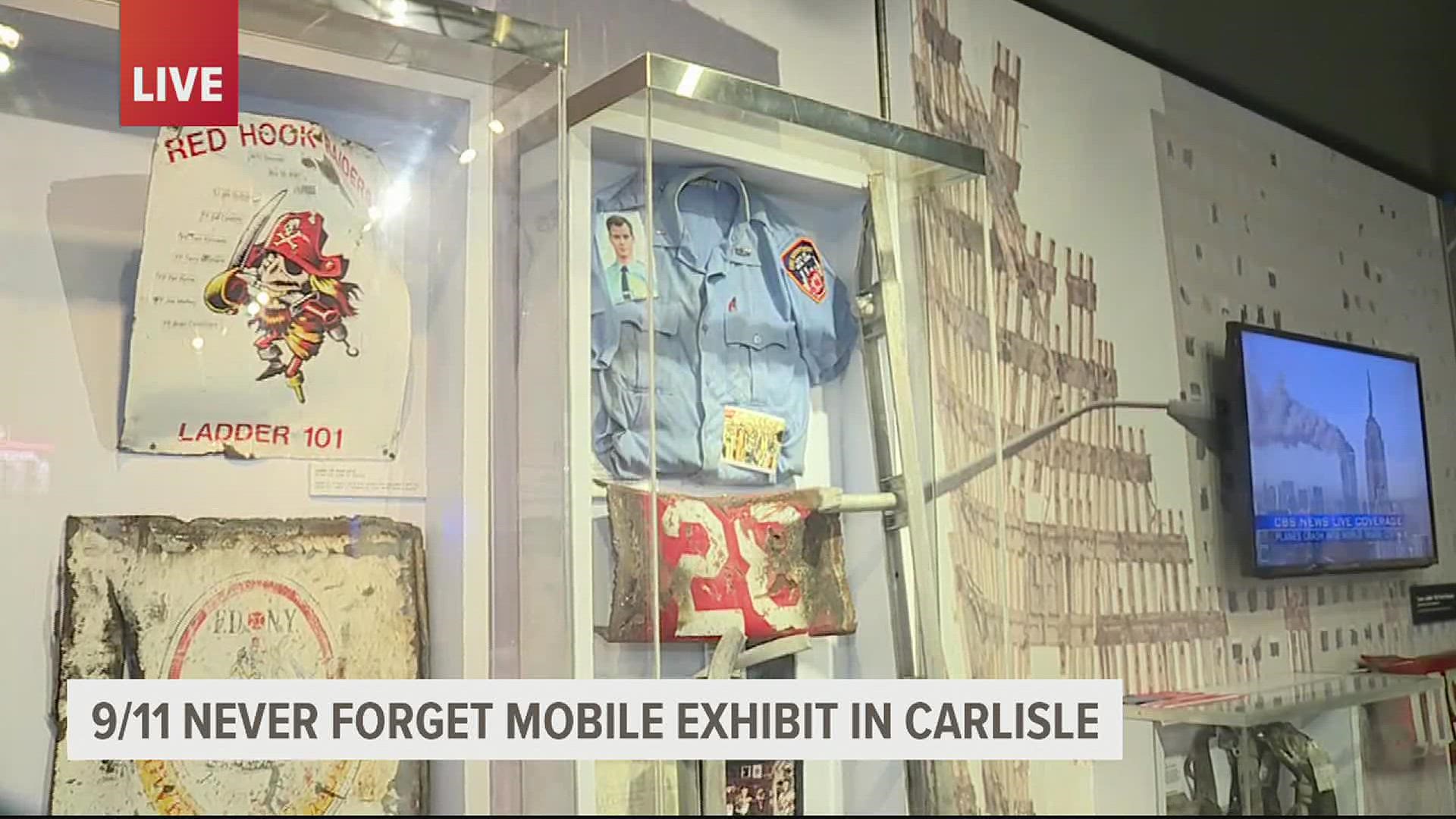 CUMBERLAND COUNTY, Pa. — It's a day that many of us will never forget and next month will mark the 20th anniversary of the September 11, 2001 terror attacks.

As that date approaches, we look back on what took place almost 20 years ago.

The hijackings, the twin towers crumbling to the ground -- but most importantly we are remembering those who lost their lives that day. We're honoring the first responders, and thinking of their families.

That's why the U.S. Army Heritage and Education Center is bringing the 9/11 mobile exhibit to the community on Tuesday, August 31. To educate those about what took place in New York City, at the World Trade Center, known as Ground Zero.

The exhibit features World Trade Center steel, radio transmissions from first responders and items found in the rubble after the twin towers collapsed.

It also features photos of the 9/11 memorial at the Pentagon and the Flight 93 National Memorial.

FDNY firefighter veterans of 9/11 will also be at the exhibit. They will be providing free guided tours and sharing more about their experiences from September 11th, the days that followed and how things changed for them after.

Representatives from the USAHEC say they brought the exhibit there to help community members reflect and learn more about the tragedy that impacted thousands, and still does today. But, most importantly they say, it's to honor those who lost their lives.

"The service the sacrifice of all the first responders, all the military personnel that were involved in that event still resonates today. And it's still extremely important to understand from any age. We can't forget those sacrifices that were made to keep us all free keep our nation free," said John Giblin, the Director of Education and Engagement with USAHEC.

The exhibit will be there for one day only. It was initially planned for two, but they had to make some changes due to the weather. It's located in the parking lot of USAHEC.

It's free and open to the public.

Masks are required, and social distancing is encouraged.

The mobile exhibit is able to travel across the United States, thanks to the Tunnel to Towers Foundation. Thanks to donations they are able to pay tribute to the fallen with the exhibit. They are also able to help the families of veterans and first responders with their Smart Home Program, Fallen First Responder Program, and Gold Star Family Home Program.

If you'd like to make a donation you can do so online.

You can learn more about the foundation, and their programs on their website.

There next stop is in Easton, PA, you can view where the tour will be next here.

🇺🇸 NEVER FORGET: A 9/11 mobile exhibit is now in place for today only at the @USAHEC.

It will be open from 10 a.m. until 6 p.m.
We’ll have a closer look inside, plus why this tour is so important, coming up on @FOX43 morning news. pic.twitter.com/whRmxaqYXU