Fallen Mount Holly officer Tyler Herndon was honored at First Baptist Church in Kings Mountain on Tuesday afternoon before being escorted to his final resting place. 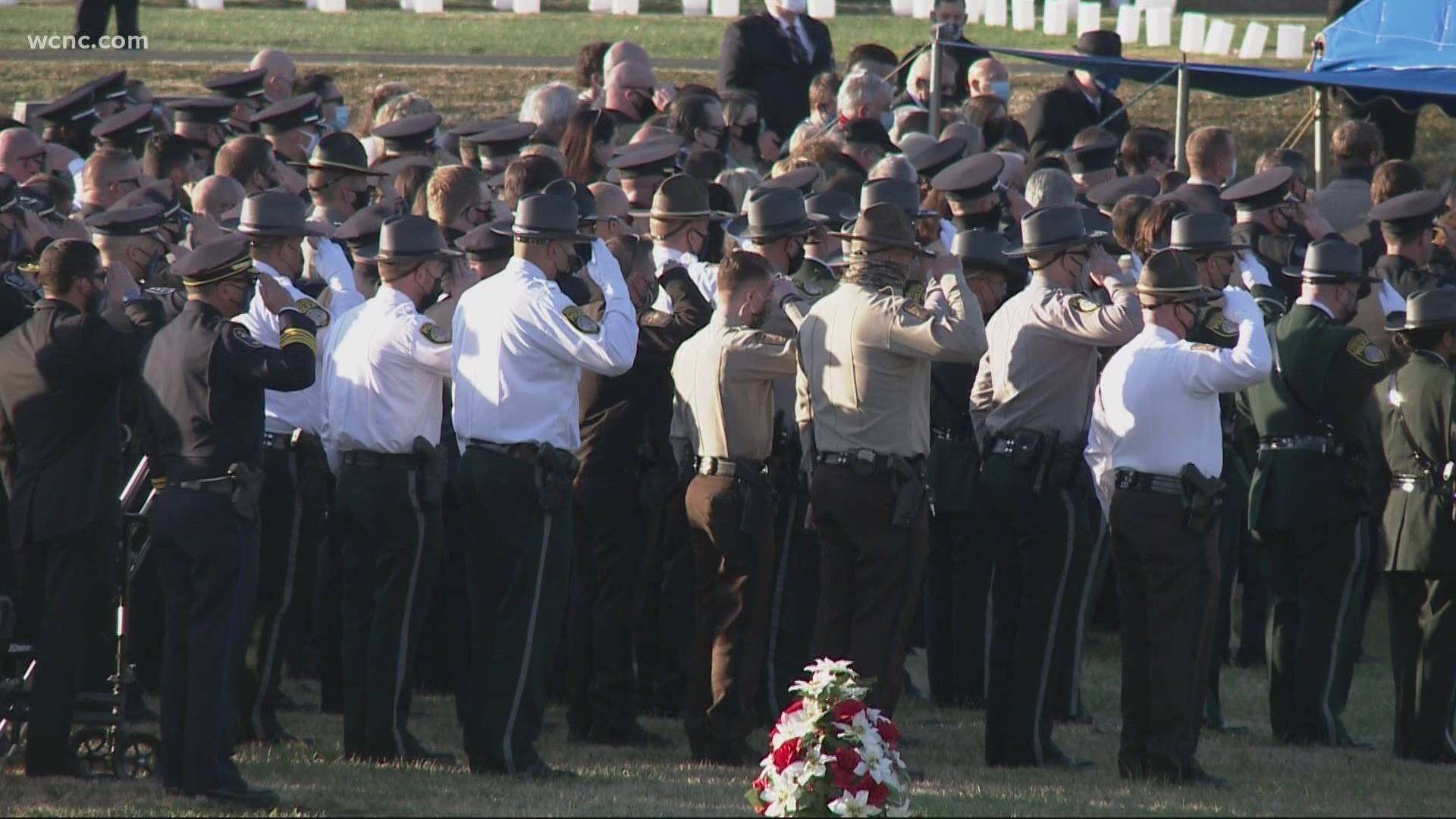 Herndon died last week after he was shot by a suspect during a break-in at the Mount Holly Car Wash early Friday morning, just two days before his 26th birthday. His accused killer was charged with first-degree murder and remains jailed in Cleveland County.

Dozens of officers from law enforcement agencies across the state showed up at First Baptist Church in Kings Mountain to honor Herndon.  A line formed outside the church for the visitation, including friends, family and fellow officers.

RELATED: 'This right here is the reason he loved this job' | Two candlelight vigils held to remember Officer Herndon

The funeral began at 2 p.m. and lasted about an hour before a procession escorted Herndon to his final resting place.

Roper asked those in attendance to do a Google search of Herndon and to look beyond the stories of how he died, saying there are countless stories of how Herndon has helped others.

"In those two short years that we had him, the things that he accomplished have earned him a spot in the history of law enforcement, in the history of Mount Holly, definitely in the history of the Mount Holly Police Department," Roper said. "He will forever be remembered for the way he lived. If there's ever a question about whether someone's life mattered, look around. You guys drove in here, you saw the outpouring of love and respect and honor. I think you've got your answer for Tyler Herndon."

Roper asked everyone to remember "the family that loaned him" to the police department: His parents, sister and girlfriend. Roper said Herndon lived a life of service, and always wanted to do what he could to help others.

Listening to the funeral service while awaiting Officer Herndon’s procession. Chief Don Roper said Officer Herndon, known to dispatch as “Adam-223,” was always available to help and had an attitude of service. pic.twitter.com/s4e2bvs613

Pastor at Bethlehem Baptist Church in Kings Mountain Steve Taylor stressed the community had been keeping the family in their prayers, saying "we are embracing you with our prayers."

Brother Chip Sloan, the pastor at First Baptist Church in Kings Mountain, said the service Tuesday had cause for celebration -- celebration in Herndon's life, and in the wealth of his relationships, rejoicing in his courage.

"Tyler was strong in conviction and he was courageous," Pastor Sloan said. "It was evident in the way he risked himself for others. He passed the C.S. Lewis test, he stood courageous in a time of testing."

He urged everyone to look at the day not as the death of Tyler Herndon, but as a celebration of his life, his faith and what he's given to others.

"He's still doing good; he's still bringing people together,"  Sloan said. "He's still providing needs through the generous gifts of others. We rejoice, we rejoice that even today goodness and mercy is following Tyler Herndon."

Tim Vicinanza lives in South Carolina after retiring as a Suffolk County Police officer in Long Island, New York. He came to Officer Herndon’s funeral as a representative of the national organization, Brotherhood for the Fallen.

“To think of all the situations that almost went bad, and that I came out of it,” Vicinanza said. “Show my respect to this family when this family sees officers from all over the country.”

Earlier this week, candlelight vigils were held in Kings Mountain and Mount Holly for members of the community to thank Herndon for his service.

Herndon's family attended both vigils, with a police escort. His father, Mark, addressed those in attendance at the Mount Holly event, thanking the community for the support.

"I love him. I'm proud of him," Mark Herndon said. "And this right here is the reason he loved this job. He loved Mount Holly. He loved the Mount Holly Police Department."

Tuesday, flags were lowered to half staff outside Kings Mountain High School, Herndon's alma mater. A procession carried Herndon's casket in front of the school on its way to the cemetery. Students and teachers were excused from class to line the street as the procession passes by.

"They're the ones that back all of us and stop anything bad from happening so you come out here to at least show respect to them," said Davis Conner, a Kings Mountain High School student. "That's the right thing to do."

Teachers who put a sign outside of the high school sending love and prayers to the Herndon family say he was a respectful student, a kid that everyone loved.

“One thing about Kings Mountain is that we support each other,” said Brandy Tate. She works with Officer Herndon’s mom in the local school district.

Tate brought her young sons to watch the procession pass the school.

"I messaged his mom and the message she sent me back was to love on my boys tight for her," Tate said. "And that was something."

Brandy Tate was a teachers assistant in Officer Herndon’s elementary school class and works with his mom. When she reached out to offer condolences, Officer Herndon’s mom said to love on her 4 boys. So they’re out here today showing their respects. @wcnc pic.twitter.com/j1ijoYtH90

The procession stopped along Bethlehem Road for about 15 minutes as Officer Herndon's casket was then transferred onto a North Carolina Troopers Association caisson to travel the rest of the way to the cemetery at Bethlehem Baptist Church.

The NC Troopers Association’s Caisson Unit has arrived at Bethlehem Baptist Church. It will transport Officer Herndon to his final resting place. pic.twitter.com/LCfTenZPph