Austin joined Mocksville Fire Department almost a year ago, and is now trying to create awareness about the difficulty those with hearing implants have becoming paid firefighters due to the NFPA 1582 standard. 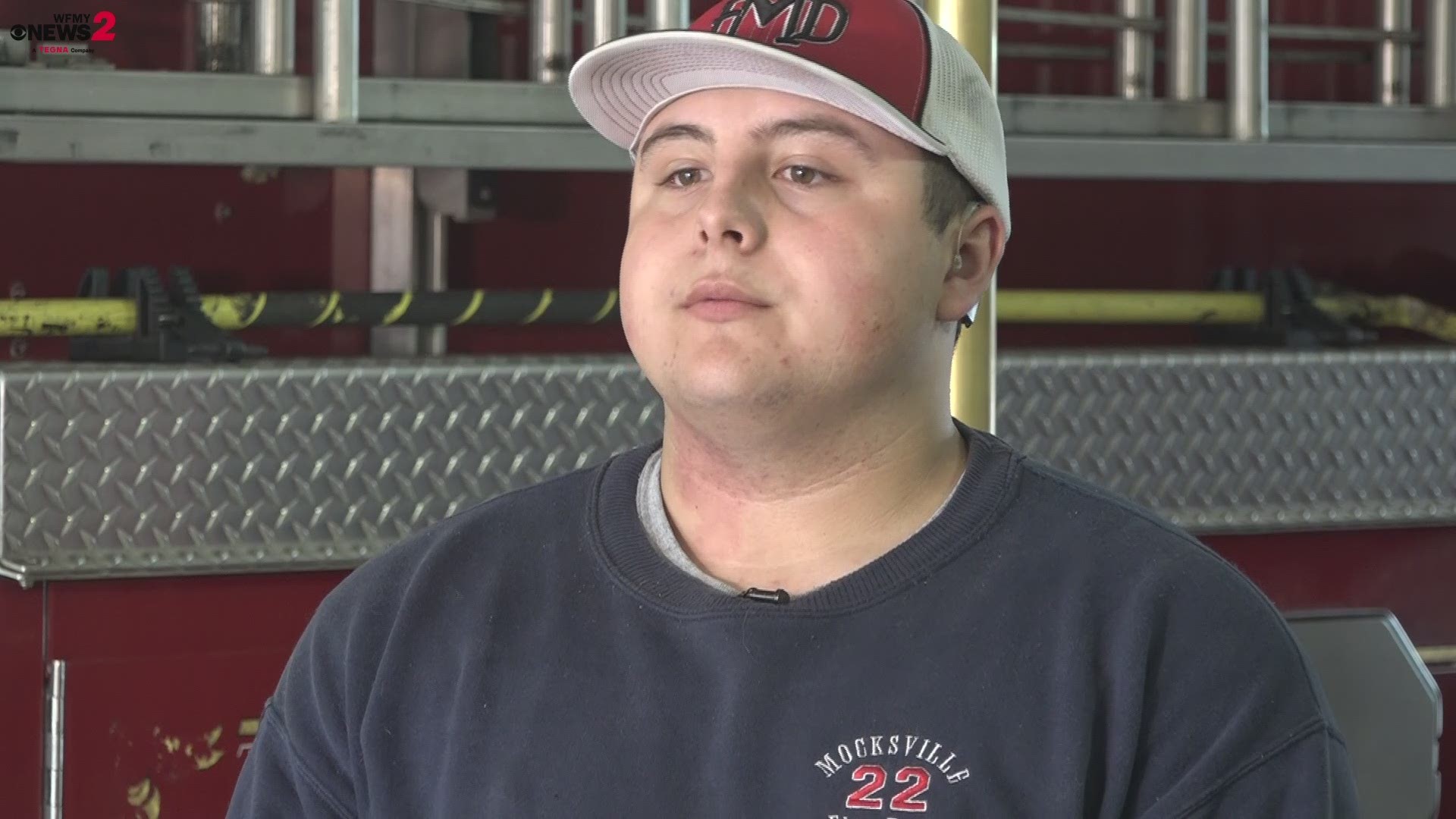 He had his first ear surgery at 2 years old, and then got his first cochlear implant on his left ear when he was 3.

In 2012, he got one in his right ear, which allowed him to hear just like anyone else.

He’s wanted to become a firefighter since he was 5 years old.

Growing up, however, Austin was always told that wouldn’t be possible.

He played for his high school baseball and football teams, but firefighting was always on his mind so he also joined the junior firefighter program in Advance.

The next step to actually becoming a firefighter was completing fire academy.

According to his mother, Dot Freidt, Austin applied to the Guilford Technical Community College Fire Academy, but was rejected. The reason: NFPA 1582 Standard on Comprehensive Occupational Medical Program for Fire Departments, a standard by the National Fire Protection Association that regulates the physical requirements for firefighters.

We asked the GTCC Fire Academy why Austin may have been rejected and this was their response:

The GTCC Fire Academy follows standards set by the National Fire Protection Association under NFPA 1582. The national standard requires each applicant pass a physical to be cleared “fit for service.” This is a prerequisite before individuals can apply to the Academy.

That didn’t stop him.

Austin then applied to Mitchell Community College Fire Academy per recommendation by the Mocksville Fire Chief, Frank Carter and completed the program.

Austin joined Mocksville Fire Department almost a year ago, and is now trying to create awareness about the difficulty those with hearing implants have becoming paid firefighters due to the NFPA 1582 standard.

Chapter 6 of the 2018 edition of NFPA 1582 outlines what the firefighter candidates and members will be evaluated for and 6.5 explains conditions of the ears and hearing.

Health conditions are classified into two categories: Category A and Category B; A being those that the NFPA believes make a candidate medically unfit, and B as ones that are considered on a case-by-case basis depending on severity or degree.

Among the category A medical conditions is “average hearing loss […] worse than 40 decibels” when tested with an audiometric device without the aid of a hearing assistance device; meaning Austin, who is completely deaf without his hearing implants, is medically unfit according to NFPA standards.

We reached out to the NFPA about 1582 and they explained that it is ultimately up to the local authority whether or not the NFPA standards are adopted since they aren’t legislation.

“The community referenced may or may not have adopted NFPA 1582 […] local authorities have jurisdiction once codes are adopted,]” an NFPA official shared in an email.

Here’s a list of fire stations we called asking what their take is on NFPA 1582 in a circumstance like Austin’s:

So far, we have only heard back from Burlington, Yanceyville, Winston-Salem, Lewisville, Greensboro, Kernersville, and Reidsville fire departments.

Yanceyville, Lewisville and Reidsville fire chiefs shared that unless the physician completing the physical rules the candidate unable to perform because of their disability, they will not refuse hiring a candidate with a disability.

Burlington, Winston-Salem, Kernersville and Greensboro fire chiefs explained that they also determine eligibility based on the physician’s clearing, but tend to follow the NFPA 1582 standards closely since they believe it will help them prevent safety and health risks of the person and the community they serve.

Austin’s favorite duty is nozzle operation: operating the fire hose nozzle on a hand line in a fire.

He wants other people like him in other cities and counties to be able to follow their dreams of becoming a firefighter too.

Chief Carter thinks the change will only happen if awareness about people like Austin’s abilities, not disabilities, are highlighted.

To learn more about Austin and his cause, follow his Facebook page, Stand Up and Be Heard.

(Note: This story will be updated as more information becomes available from other fire stations).