#NotMyPresident Protests Continue For A Second Night Since Election 2016 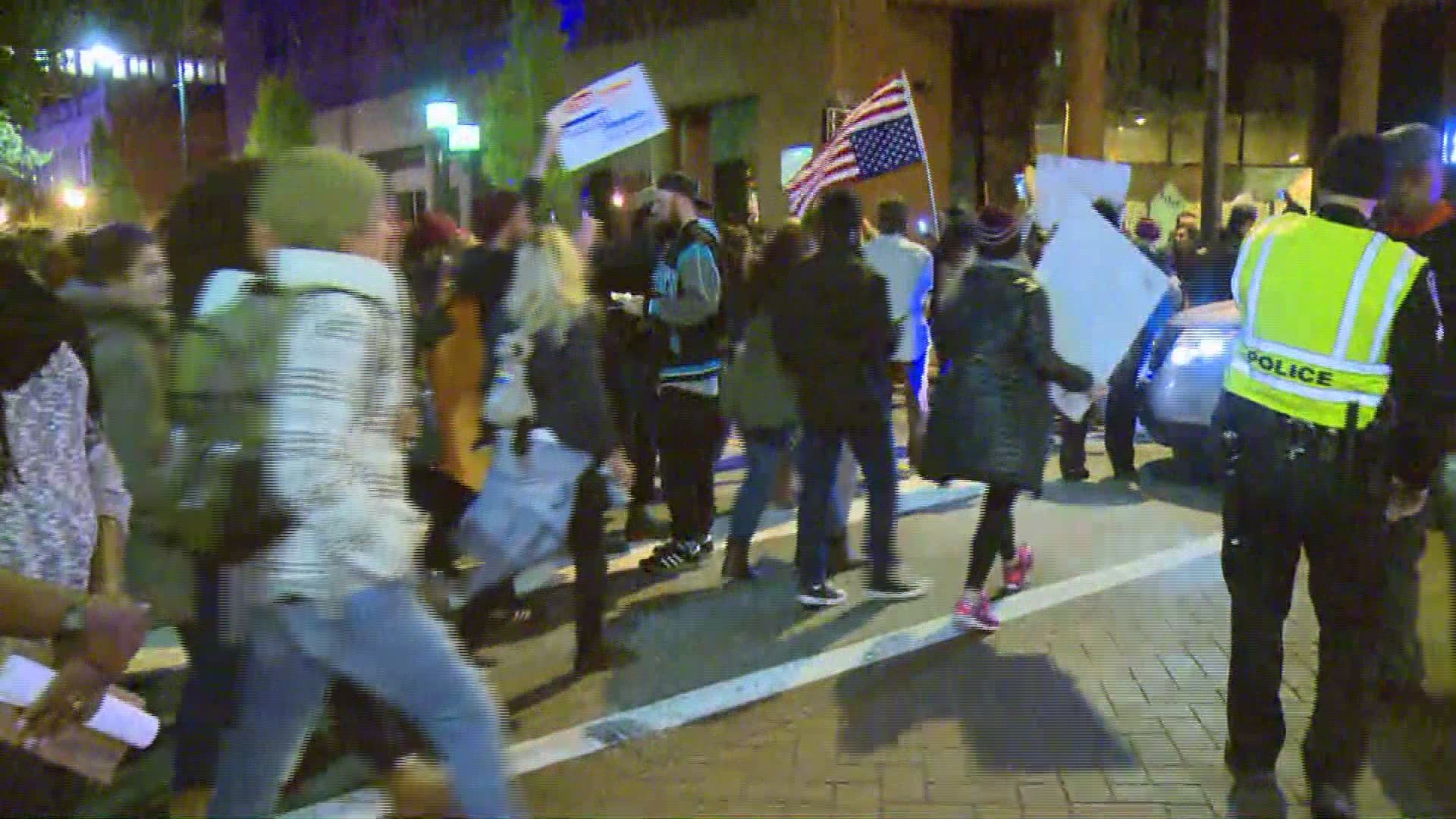 That as hundreds of protesters are gathering along Elm Street. Protesters are chanting and holding signs reading, “Not My President.”

Police arrested two protesters during the protest as of 9:30 p.m.

Greensboro Police have estimated a crowd of 500 protesters as of 9:45 p.m. in the downtown area. 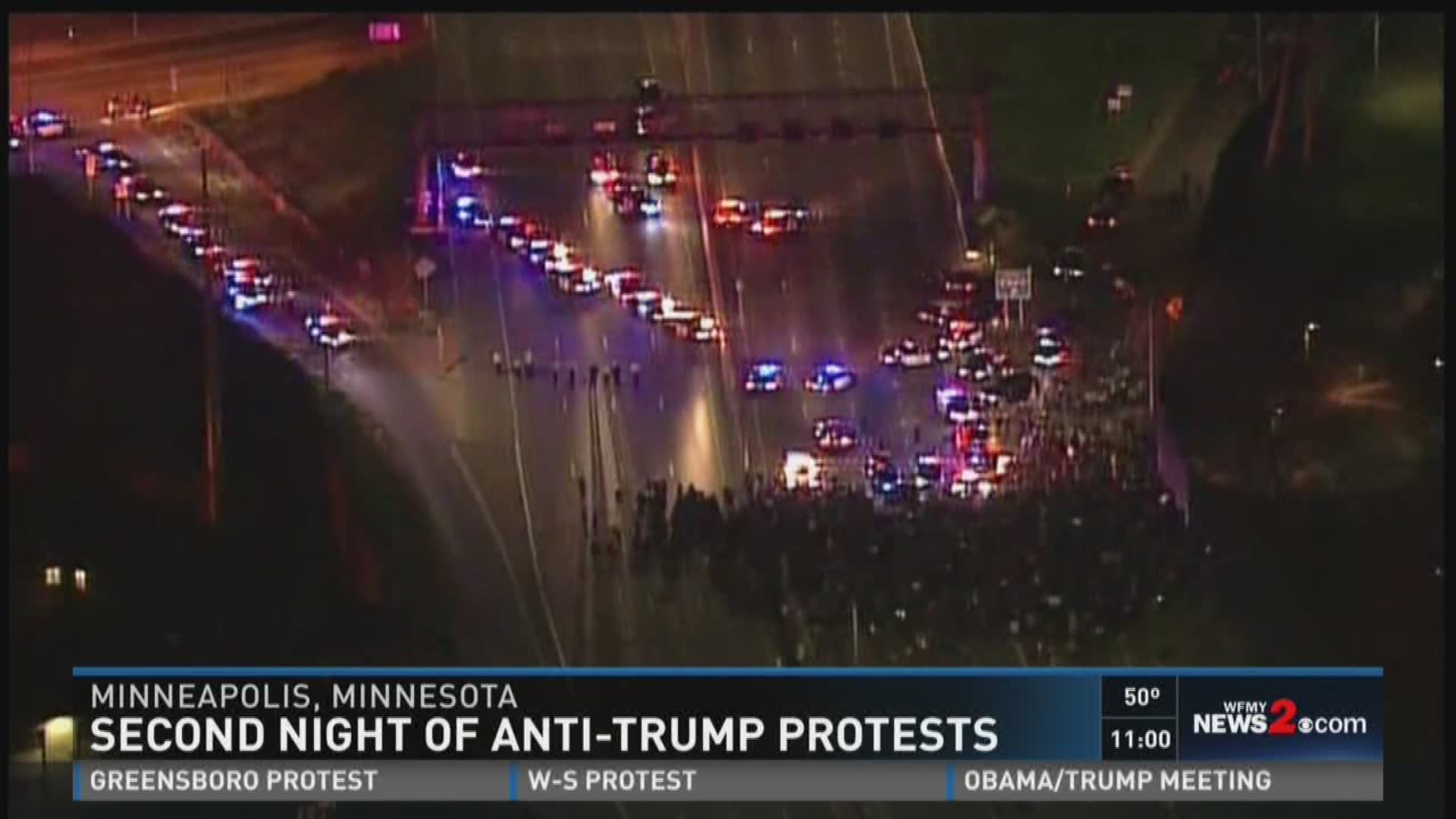 The night of protests is one of many happening for a second night across the country after Donald Trump’s Presidential win.

Read: Thousands Protest Trump Victory All Across The Nation

Like a rolling wave, protesters voiced their anger all across the country. Fires raged in Oakland where 7,000 gathered while an effigy of the President-elect burned in Los Angeles, CBS News’ David Morgan reports.

CBS New York estimated that about 200 people were gathered across the street from the building on the sidewalk. Unlike Wednesday night, Fifth Avenue remained open.

The group again held signs reading, “Bump Trump,” and “Not My President.”

Protests were also held elsewhere around the country again on Thursday. Trump took to Twitter Thursday evening to express his disapproval of the protests.

In Minneapolis, a swarm of protesters blocked Interstate 94 in both directions Thursday night after marching from a rally at the University of Minnesota.

The Star Tribune reports some protesters sat down on the freeway or stood locking arms and facing a line of police officers.

It was the second night of protests in the Twin Cities over Trump’s election. Similar protests popped up in cities across the nation both Wednesday and Thursday nights.

The demonstrators entered the freeway after marching down Franklin Avenue. Protesters blocked both lanes for more than a half-hour and chanted, “Shut it down.” Officers from the Minnesota State Patrol and Minneapolis and St. Paul police departments rushed to the area.

Hundreds of protesters displeased with Donald Trump’s election as president have marched through Baltimore to the stadium where the Ravens were playing a football game.

Protesters marched downtown to the Inner Harbor and then to the M&T Bank Stadium, where the Ravens were hosting the Cleveland Browns for Thursday Night Football.

The protest brought traffic to a standstill but was otherwise peaceful.

The Baltimore Police Department says in statement that the protest attracted a crowd of roughly 600 people. The statement says two people were detained by police but no one has been charged.

In Philadelphia, protests against President-Elect Donald Trump got underway around 5:00 p.m. on Thursday night, marking the second straight day of demonstrations over him being elected president, CBS Philadelphia reports.

CBS Philadelphia’s chopper was live over Center City where some protesters gathered. The protests came amid word that some of those who were displeased with the result of the election, took to vandalism at City Hall on Wednesday night.

Philadelphia Police are telling commuters to expect delays. They add that a group of approximately 1,000 people marched on JFK Boulevard heading towards 30th Street.

The signs throughout the protests have made it clear of the displeasure that the demonstrators have for a President Trump. The rally started with a gathering of hundreds of people outside of the Municipal Services Building before the marching began.

Police said that Wednesday’s protest was peaceful and they expected the same for Thursday. They estimated that as many as 1,000 people protested on Wednesday night.

Officers characterized the protest as uneventful.

“For the most part, they were peaceful,” said Lt. John Stanford. He added that they were a couple instances along the way of people setting fires, some burning flags. A photo was also snapped of city workers cleaning the words “Not My President,” off of City Hall.

Officers say it is important to strike a balance between people expressing themselves and the safety of others.

More than 2,000 students walked out of several schools Thursday morning and headed toward Civic Center Plaza, according to the San Francisco Unified School District.

From there, many of the students walked down Market Street, through downtown and along the Embarcadero.

As students from other city high schools streamed out of the Muni metro subway stations, the crowd swelled. Traffic on the busy Embarcadero grounded to a halt as the students marched toward Fisherman’s Wharf.

The group eventually returned to Civic Center Plaza and gathered on the steps outside City Hall, taking turns with a megaphone to talk about Trump.

“Donald Trump cannot be our president. I mean it’s depressing, America, I thought we were better than this,” Fritz said.

Nate, also a freshman at Bay School of San Francisco, said, “It’s nice to have a voice, even if we can’t vote.”

He said if underage teen students were able to vote, “that probably would have changed things” in the narrow race between Trump and Democratic candidate and former Secretary of State Hillary Clinton.

Perry Cox, a 15-year-old Lincoln High School student who was at the protest with her mother, said, “I don’t want Trump as my president for the rest of my teen years.”

Cox said she hoped the San Francisco students’ protest, one of several taking place around the Bay Area Wednesday and Thursday about the election of Trump, “will draw attention to the fact that he shouldn’t be our president.”

Students from the Bay School of San Francisco were there with the permission of their parents and teachers.

SFUSD officials said while they supported the students’ right to free speech, the walkout from the public schools “was not authorized by SFUSD staff” and families will be notified through the district’s attendance system about their unexcused absence, per standard protocol.

Interim Superintendent Myong Leigh was at the rally and said he has “mixed feelings” about the walkout because of concerns for the students’ safety, but said “We’re proud of these young people, we’re proud of the actions they’re taking to channel their emotions and we want them to know we stand with them.”

The crowd was beginning to disperse as of shortly before 2 p.m.

In Oakland, students walked out of classes and interrupted a press conference by Mayor Libby Schaaf.

A group of between 200 and 400 Pittsburg High School students marched with their principal from their school to Antioch. According to Antioch police, the protestors headed through Century Plaza in Pittsburg and into Antioch on Auto Center Way and Sycamore Drive, causing significant hazard and traffic delays in the area.

The group proceeded to the Antioch High School campus in an apparent effort to involve students there. Antioch High was placed on lockdown, but the Pittsburg High students still entered the campus and damaged school property, knocking down fences and kicking over trash cans.

The group then left that campus and headed to Antioch Middle School, which was also placed on lockdown, as was Live Oak High School and nearby Fremont Elementary School, though the protest never made it that far.

According to Antioch police, the Pittsburg High protesters continued to cause havoc on Antioch campuses and in the surrounding neighborhoods for more than two hours. 15 Antioch officers were involved in policing the protest, causing a strain on department resources.

School officials said the students organized the march and rally through social media Wednesday and those who participated will be charged with an unexcused absence.

“I was really impressed with their message. It was one of unity and support. There was no profanity or fighting. It was very respectful,” Emmett said.

The Bay Area has been the scene of several demonstrations since Trump’s victory was announced early Wednesday morning.

Most have been peaceful, but a demonstration in Oakland turned violent Wednesday night.

Police deployed tear gas several times throughout the night to keep members of the crowd from throwing rocks, bottles, fireworks, M-80s and Molotov cocktails at officers.

Twelve other law enforcement agencies were called in to assist Oakland police, including police from San Leandro, Hayward, Fremont, Alameda, Livermore, Newark, Pleasanton, Berkeley and the University of California at Berkeley.