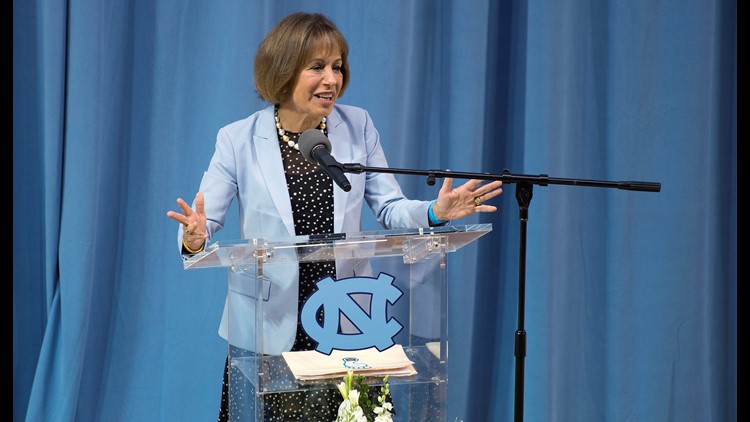 On Her Last Day, UNC's Carol Folt 'at Peace' with Decision to Resign

CHAPEL HILL, N.C. — On her last day, UNC Chancellor Carol Folt said she was at peace with her decision to resign.

"I am at complete peace with my decision," she said. "I did what I thought was best and I’m still at peace with that.”

Folt's resignation came as a surprise to many - including the UNC Board of Governors - on Jan. 14.

She released a statement that said she intended on staying on as chancellor through graduation.

In that statement, she also authorized the removal of the base and commemorative plaques from the Confederate Monument site in McCorkle Place.

The following day, the Board of Governors made Folt's resignation effective Jan. 31.

On Thursday, Folt opened her remarks with a Dr. Seuss quote: “Don’t cry because it’s over - smile because it happened."

She went on the thank then UNC System President Tom Ross for hiring her in 2013 and his successor, Margaret Spellings, for her time.

"I’m always a Tar Heel," Folt said. "Don’t know if I’ll be back on the faculty permanently. But it’s something I’d treasure and enjoy."

The UNC Board of Trustees passed a resolution of appreciation for Folt and said her she receives their “highest praise.”

Folt will be inducted into the Order of the Long Leaf Pine - highest award given by a North Carolina governor.

Folt's time as chancellor has been filled with controversy as she took over for Holden Thorpe, who left amid the no-show classes scandal involving some athletes.

That scandal was put to rest in Oct. 2017 when the NCAA said it would not penalize the University.

The "Silent Sam" debate dominated the final months of Folt's time at UNC.

On Aug. 20, protesters tore down the Confederate monument on campus. Heated rallies and demonstrations took place where the monument once stood over the next several weeks and months.

In early December, UNC released its plan to house the monument in a new $5.3 million building on campus. The Board of Governors rejected that plan soon after.

A 2015 North Carolina law prevents monuments like Silent Sam from being removed.