Jeannine Wenner is proud of our military. To show support for them and our country, Wenner placed eight small flags in her yard. The HOA wanted the flags removed. 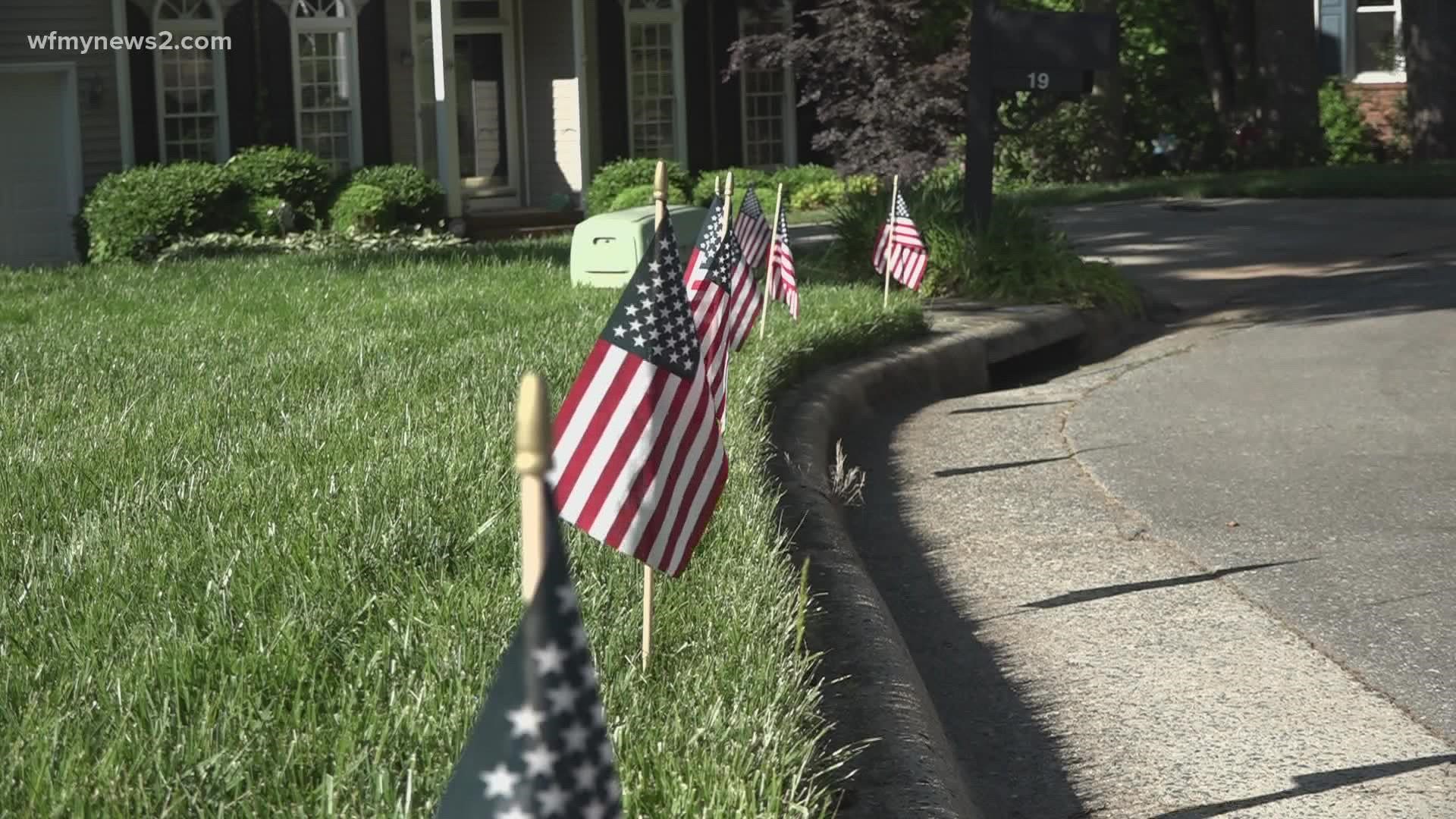 GREENSBORO, N.C. — When Tom and Jeannine Wenner started looking for a new home, she had one thing at the top of the list - it had to have a pool. The couple liked the house they had but wanted a big backyard with a pool to entertain.

“We were lucky enough to get a phone after the first offer fell through,” Jeannine Wenner said.

The couple moved in about four years ago and have spent much of that time making minor and major improvements to the home and yard.

“It’s such a nice area, the trees, it’s a wonderful side of town,” Wenner said.

At first, the couple enjoyed everything about the new home and neighborhood, but problems would eventually pop up. Wenner said it started with neighbors letting their dogs go to the bathroom on her grass.

“One time I looked out my window and dogs were lined up in the yard,” Wenner said.

“After I put the stakes in the ground, she (neighbor) ripped them out,” Wenner said.

A short time later, the couple put up a fence that the board determined was a violation and ordered them to take it down or they’d be cited and possibly fined.

The fence was taken down but the start of a feud between her neighbors, many of them on the board, had begun. The issues continued for several months and involved yelling matches, police calls, and property damage.

The last straw for the Wenners came after some small United States flags were displayed in their front yard. The HOA board allowed the flags for a short time but eventually sent a letter asking the flags to be removed.

“They (the board) said they were political flags,” Wenner said. “They are not political they are American flags.”

The confusing part to Wenner and her husband was that several homes in the community had larger flags or banners in the yards. The Wenners had eight of the small flags with sticks lining the front of her yard.

“I love the flag and my dad served in the military,” Wenner said.

After hearing about the situation News 2 contacted the HOA management company and the board’s attorney. We were also told the flags are a violation and must be removed or the Wenners would be cited.

We then took some time to look closely at the HOA covenants and guidelines. We quickly discovered flags can be displayed in front of homes.

It was then we were told by the attorney the way the flags were displayed, running across the front of her lawn by the sidewalk, making it a barrier and thus was not allowed by the HOA.

There are regulations about barriers, so the question became, are eight small flags, spaced about six to 10 feet apart, a barrier? We contacted an HOA attorney who is not involved in this community but does represent HOA communities. He told us the barrier argument is not reasonable and he feels the HOA in this situation is reaching.

The determination, by the board, that these flags create a barrier does not seem to be a viable violation of the rules in this community or any other, according to the HOA attorney we spoke with. He told us the flags, which are not even two feet tall, are simply not a barrier by almost any definition.

We also reached out to a representative with Legal Shield to get some insight on the issue. We wondered how the HOA board could ask the flags be removed but allow other neighbors to keep their flags or banners up?

"It sounds like on some level discriminatory, people are being treated differently than others in the community, being held to different standards,“ said Rob Heidbrink.

A few weeks after we tried to better understand what the board planned on doing moving forward, the Wenners received a letter in the mail. The board had concluded that the flags were an "unapproved improvement" to the property, but it would not pursue enforcement of the governing documents.

“I was thrilled the board is allowing us to keep the eight flags. It’s wonderful,” Wenner said. “I just want to help WFMY get to the bottom of this for us.”

In this situation, the HOA board decided not to pursue any penalties or fines, but that’s not always the case. Before purchasing a home, it’s always a good idea to review the HOA covenants and guidelines. In some situations, homeowners have been fined thousands and thousands of dollars. HOA boards can also attempt to seize your home if fines go unpaid.