It should have cost about $10 and taken five minutes. JoAnn Gough said the incident ended up taking more than 45 minutes and caused more than $1,400 in damage. 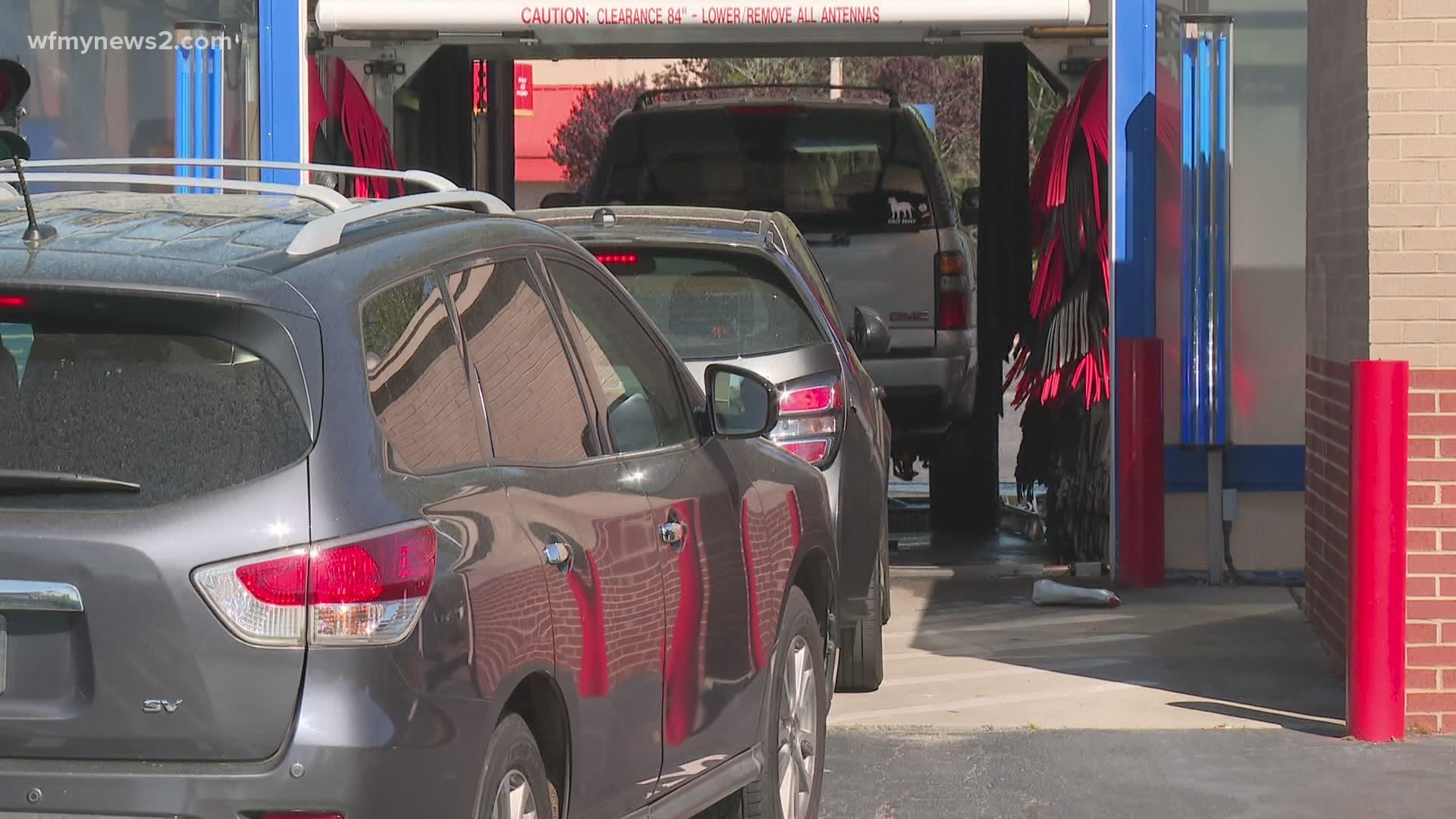 CLEMMONS, N.C. — JoAnn Gough and her husband Danny were out running some errands when they decided to swing by a car wash. It was quick and easy, and JoAnn Gough had been needing to get it done for a few days. The couple pulled up to the automated kiosk and selected their service.

“When I paid in the machine it did not give me the verbal prompts that it normally does, and I didn’t get a receipt,” she said.

The couple then drove the car up to the front of the car wash and slowly started to enter as they have done several times in the past. JoAnn Gough said she did what she has always done, and the car started to go through.

“We are sitting there (in the car) and the polls are doing their job moving back and forth and the ribbons are spinning hitting the car,” she said. “All of a sudden, when it gets to the back of the car it stops and the polls completely stop, and it plunges into the car.”

The small little Mazda Miata was slightly lifted at the time of the incident according to Gough. Her husband immediately stepped out of the car to see what had happened.

“He sees the polls plunged or jammed into the car,” JoAnn Gough said.

At this point, she said the machine has shut down. Her husband proceeds to walk inside the convenience store to speak with an employee.

“While (Danny) was walking inside the machine starts back up again,” Gough said.

A short time later her husband and an employee come out and she said she was instructed to pull out of the car wash and park in front of the Quality Auto Mart.

“He (the employee) takes pictures with his phone, he writes down the name of the manager at the store,” JoAnn Gough said. “He was apologetic and very helpful.”

Told that someone from the store would be in touch in the next couple of days Gough and her husband drove home. A few days passed and Gough said no one from Quality Mart called so her husband contacted the store.

“I never doubted at that point (that they would pay) there was no question in my mind, she said.

A day or two later she met one of the managers at the store. It quickly became obvious that the store was not going to pay for any repairs.

“They are saying they had their engineers and technicians look at the car wash and they can not get it to replicate the accident,” JoAnn Gough said. “When I met with him, he actually suggested my car could have been damaged when I entered the car wash.”

Not sure what to do she reached out to WFMY News 2 to see if we could help. We contacted the car wash company and spoke with an executive. We were told the company had investigated the issue and determined the machine could not have caused the damage.

There really is no way for us to know if the car wash damaged the car. We certainly weren’t there when it apparently happened and there are no cameras that captured the incident.

There is however one other important part of this story we needed to investigate. We contacted a young woman by the name of Ashley Brill. You see Brill was also getting her car washed that day and was in line right behind the Gough’s car at the car wash.

“All of a sudden, I kind of saw the car rock in the car wash a little bit and it caught my attention,” Brill said. “This was excessive the car just lifted and stayed there as the car wash stopped.”

Brill said she then looked at the car and could see the dent in the back bumper.

“The brush pushed into the car and caused the dent, at that point I clearly did not want to put my car in that car wash,” Brill said.

Just like Danny Gough, Brill went inside the store and spoke with an employee. She said she asked for a refund and told the person what she witnessed. She then provided her contact information to the couple.

Brill expected to hear from someone at the Quality Mart in the upcoming days but no one from the company called. The couple asked if she would provide a written statement as to what she saw. Part of her statement is below;

“I was in line to have my car washed at the Quality Mart. I paid for my car wash at the pay station and sat in line waiting for my turn to pull in. As I watched the brush mechanism, suddenly, I saw the Miata rock on the passenger side. It lifted the right side of the car up. This appeared totally abnormal to me. Then, I saw a man, who later identified himself as Danny Gough, get out of the passenger side. He looked toward the brush device jammed against the rear bumper of the car and headed into the store. Before Mr. Gough returned, the car wash poll pulled away from the car and it sat back down to what appeared to be a normal level. Then I noticed a pretty large dent in the area where the spinning rag pole was stuck against the bumper. There is no question in my mind that the car wash damaged Mrs. Gough’s car.”

When we spoke with Brill a few weeks after the accident, she told us that Quality Mart never contacted her but told us about the signed statement she provided the Gough’s to forward it to Quality Mart.

“I don’t know why they (Quality Mart) hasn’t called but they haven’t,” Brill said.

When we contacted Quality Mart it would not tell us why it has not contacted Brill. We sent a list of questions to Quality Mart looking for answers. The company declined to answer any of them only sending us the same letter it sent to the Gough’s.

We hope this letter finds you well. We appreciate your patience and communication throughout the duration of the circumstance involving your Mazda Miata.

Although we understand that you are not in agreement with the outcome of the situation, we want you to know that we value your business and we appreciate the effort and cooperation you have provided during this process. To further communicate, I have outlined the steps taken by myself and Quality Oil Company to investigate and close this matter. I apologize that the fact finding of our investigation is not satisfactory to your liking, however, we feel strongly that we have thoroughly researched and concluded this matter to the best of our ability.

1) 5/10/2020 - Received notice to store of a concern with car wash – the car wash was closed until further inspection -incident was reported by the store.

3) Car wash was fully functional prior to and after the encounter on 5/10/2020 with no malfunctions, damages, or problems.

4) In person meeting with Mrs. Gough at the car wash location. Meeting purpose - review the car wash, how it operates, and how the angles of the brushes function. Goal - explain and communicate our fact findings with Mrs. Gough and our stance that liability would not be accepted.

5) Due to the expressed dissatisfaction by the customer, contacted the manufacturer of the car wash to discuss the situation. Outcome – after all information was provided to the manufacture, response provided concluded the damages presented could not have been caused by the car wash, due to the mechanical function of the car wash compared to the type of damage caused. We apologize that the situation did not conclude to your satisfaction and we hope that you will understand our stance based on the facts and data that has been presented. We appreciate you as a customer and thank you for your business.

On several occasions, we contacted the company to better understand how it investigated the incident and why it apparently did not speak with the eyewitness? On every occasion, the executive we spoke with declined to comment or answer any of our questions.

One thing that JoAnn Gough told us what that the manager told her there is a sign posted before entering the car wash that the customer basically assumes all risk and that the company is not liable for any damages. We did some investigating into that type of sign and discovered there is more to it than that.

“Any disclaimer, whether it’s a car wash or anything else is with regards to an expected risk or the car wash, not something outside the expected risk, however, an unexpected risk would be some sort of damage, that under the law, would be called an (unexpected) event.” Attorney David Daggett said.

In this situation the damage that the Gough’s and the eyewitness said took place was an unexpected event and according to Daggett the warning sign in front of the car wash would not apply.

The Gough’s do have insurance and were able to file a claim for the $1,400 worth of damage and have the bumper repaired. They still, however, are frustrated that the company declined to pay for the damage and did not even speak with the eyewitness.

Here's how to prevent yourself from being in the same situation as the Gough’s. It may seem ridiculous but take pictures of your car right before entering the car wash. While the company could still decline to pay for any damages it would certainly strengthen your case if you decide to go to small claims court.