"I’m going to be getting a job and everything. Get my own place," Robert Wade said. "I believe there’s a pretty good chapter coming up.” 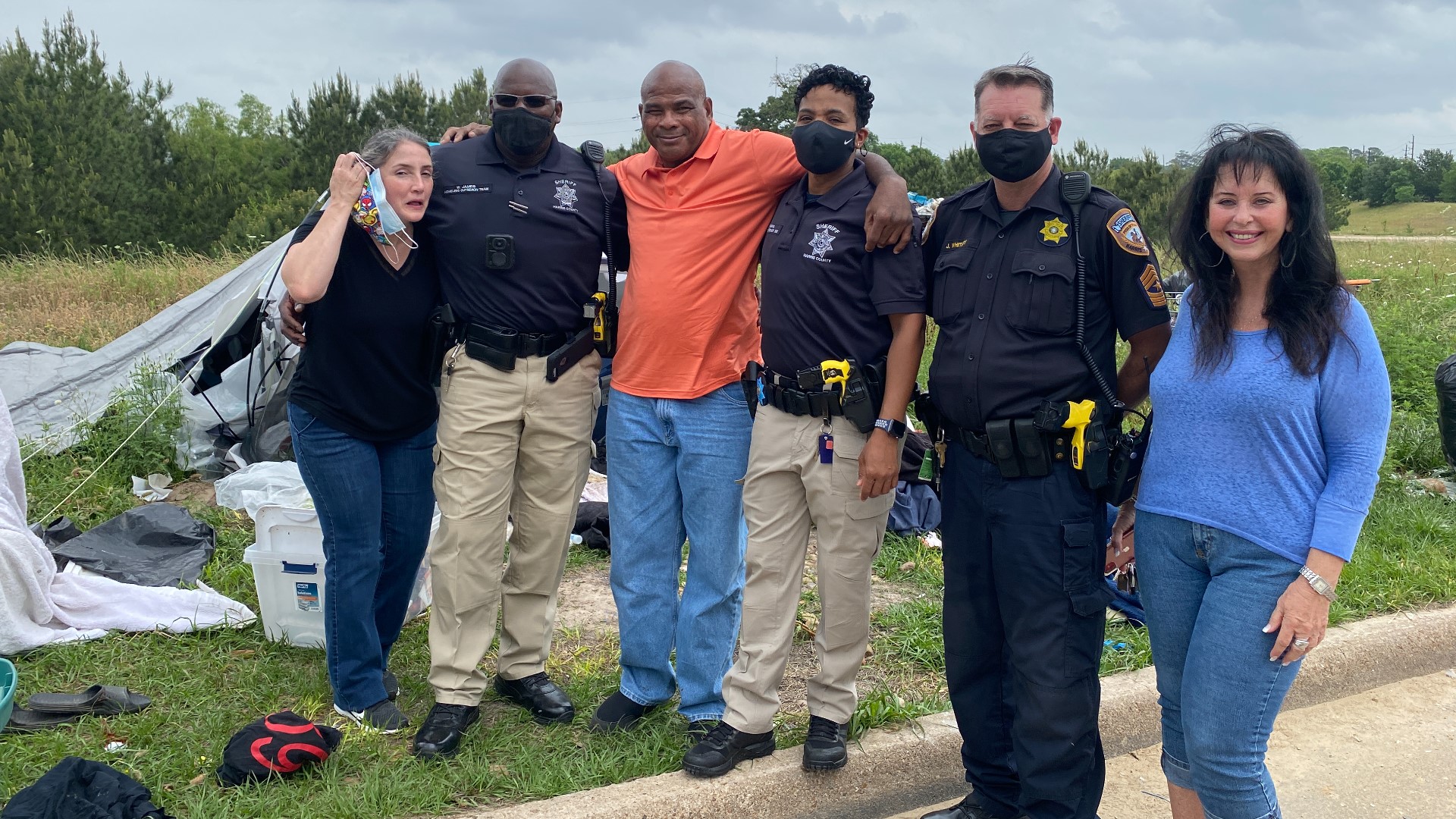 HARRIS COUNTY, Texas — At 62 years old, Robert Wade has his sights set on the future. Homeless for more than a decade, blind for most of this year, the U.S. Navy veteran just had surgery to correct his vision.

The life-changing surgery was orchestrated by a Harris County Sheriff’s Office deputy. A Texan helping Texans.

It all started on April 16. Deputy Tracey Thomas, who is one of 11 deputies devoted to the HCSO Homeless Outreach Team, responded to a call near Highway 290 and the Sam Houston Toll Road.

“A man was disoriented, no clothing on, just his underwear, sitting in the middle of the roadway," he said.

Robert Wade had no idea where exactly he was sitting. He says over the last few months, his vision had deteriorated so much that he was forced to keep food, water and clothing within arm’s reach. That’s the only way he could keep track of things.

"He was going to be killed,” Craig said, either by a vehicle or someone wanting to harm Wade and steal what few things he kept in a camping tent along a busy street.

Craig befriended Wade seven years ago after she read a post about him on social media. Craig sparked the friendship by brining Wade fresh meals.

“I was a little apprehensive initially. Because we hear that homeless people are schizophrenic, bipolar. They’re dangerous. They’re alcoholics. They’re strung out on drugs," Craig said.

She says Wade was just down on his luck. Craig and more than a dozen other neighbors have cared for the 6-foot-tall Black man with a booming build for the last several years. Neighbors would bring in food, wash his clothes, replenish his toiletries. Wade refused permanent shelter multiple times. He lived in a tent for years.

Last week, our @HCSOTexas HOT met a blind 62yr old Navy #Veteran who was #homeless for 18 years. After multiple tries, Deputy Thomas convinced him to go to @VAHouston for his eyes. HOT transported him for consultation, pre-op, & cataract surgery. Today his surgery was successful! pic.twitter.com/M6xFgCD0Fg

“I was able to manage up until about two months ago,” Wade said. It’s hard to keep track of time when you’re blind. He believes he went blind two months ago, but also told KHOU 11 he thinks he lost his vision in January. It’s now nearly May.

“It was rough. It was rough,” Wade said of living on the streets without being able to see.

In spite of the danger and the community’s calls to police, Wade was still not convinced Deputy Thomas was, “here to help him with every need.”  On the Friday the two met, Thomas gave Wade some time to think about visiting doctors at a V.A. hospital. He had the weekend to consider getting medical help.

BLIND, BUT NOW HE CAN SEE! @USNavy vet Robert Wade’s been homeless for nearly 20 yrs. He lost his sight months ago. @HCSOTexas found him sitting in street. Deputies got him surgery at @DeptVetAffairs, shelter! #khou11 shares more at 6. I can’t wait❤️ pic.twitter.com/km69BAvFHg

She escorted Wade to a VA Hospital for a consultation with an eye doctor. Thomas, who works with multiple homeless Harris County residents, juggled her job responsibilities while getting Wade to, “doctor’s appointments. Making sure he gets the medication in his eyes four times a day. Make sure I take him to get a COVID test before the surgery.”

Last Thursday, doctors performed surgery on Wade’s left eye. Thomas described the moment as, “so powerful, and I felt like I won the lottery.” Wade said it was life-changing, because he could immediately see after the surgery.

“He could see me,” Thomas said. “Finally see who he’d been talking to.”

“It really makes a difference when you can see,” said Wade as he looked through his tent and worked to get his bearings in a neighborhood he navigated blindly.

Wade is no longer living outside. Deputies transferred him into a halfway house so his eye can heal in a clean environment. Deputy Thomas has placed Wade on a number of lists for permanent housing. Cross your fingers he can get into a permanent home soon.

It's A LOT of work to make it happen.

Deputies can't just tell @DeptVetAffairs what to do, & these deputies are helping LOTS of homeless folks. pic.twitter.com/k9b8TV8rhs