SUMMERFIELD, N.C. -- Most people pick where they live for a reason. Some like the hustle and bustle of the city; others like the quiet in the country. But one neighborhood in Summerfield is worried their sleepy community will be interrupted by a new Dollar General Store. 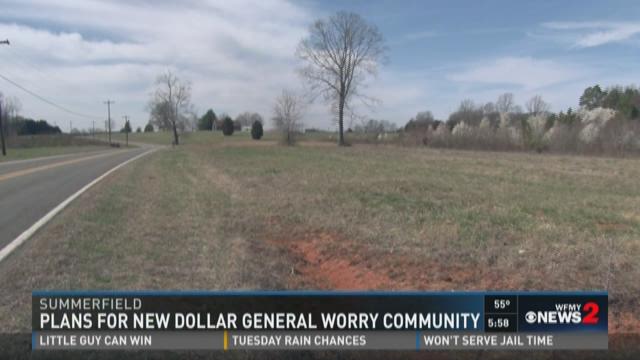 SUMMERFIELD, N.C. -- Most people pick where they live for a reason. Some like the hustle and bustle of the city; others like the quiet in the country.

But one neighborhood in Summerfield is worried their sleepy community will be interrupted by a new Dollar General Store.

"What we have here is a bedroom community," explains Bob Grant, who's lived in the neighborhood for more than a decade.

Grant doesn't think it's something his community wants or needs.

"Kids can play kickball," Grant explains. "They can do anything they want to on these grasses but if you come out here with that kind of development, this road will be so busy."

The development process is in its very early stages. Rockingham County hasn't even had anyone submit a rezoning application for the property.

Development company Teramore Development currently has the property and is taking steps to see if they want to move forward with a Dollar General. Monday night the company held an information meeting at Glencoe United Methodist Church. The company's goal is to hear community feedback before solidifying plans.

"Really our main focus is to answer questions, show them some of the possibilities," explains Daniel Almazan, who works in site acquisition for Teramore Development.

Almazan says their plan for the Summerfield site wouldn't be a typical Dollar General store - it would be nicer. He says the company is used to opposition from more rural areas when it comes to development, but he hopes to quell any concerns people might have and incorporate their concerns into their ultimate development plan. He says one of the top concerns is more traffic and crime that could come with it.

"In the broader scheme of things, it's not going to increase traffic a whole lot," Almazan explains, saying a DOT impact study shows traffic in an area like Summerfield would increase by about 2-3%. "We work off of the existing traffic accounts and their market area is small enough to where they would rely on people already passing by the site just to stop on their way home."

But Grant and his neighbors aren't totally convinced. He says there are more than half a dozen other Dollar Generals within a 10-20 minute drive away.

"They want to start with a dollar general store and you only know what else is going to happen," Grant says.