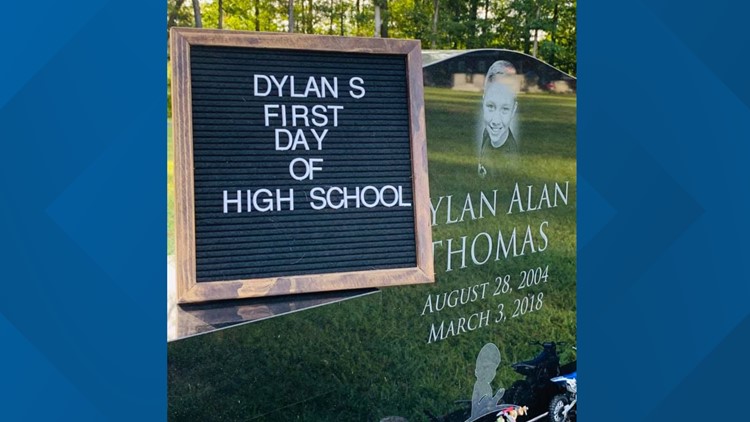 RANDOLPH COUNTY, N.C. — On the first day of school, it's customary that parents take pictures of their children holding signs showing what grade they're going into. Cloie Thomas' picture this year was different than that.

"I’m sure the lady that cussed me in the parking lot at the elementary school for getting to a parking spot before her, didn’t know where I’d be heading after I dropped my daughter off," Thomas wrote in a Facebook post.

This year would have been her son Dylan's first day of High School.

Thomas is honoring her son, still giving him the chance to hold that first day of school sign, but at the headstone of his grave.

"We have received so much love and positivity from the post, people sharing stories of similar struggles and feelings, and also people saying how much the post made them appreciate what they have a little more," said Thomas.

"All of this came the day before Dylan’s birthday on August 28th. I like to think that maybe this is his way of giving me a sign that we are not alone, and that he loves us," said Thomas.

Dylan was diagnosed with an extremely rare form of myeloid leukemia at the tender age of 11.

"After multiple rounds of chemo, we had a difficult time getting him into remission for a bone marrow transplant," said Thomas, "One of the rounds was so harsh it wiped out his entire immune system to the point where he had no defense against an extreme bacteria that caused him to go into septic shock."

Thomas says a day before his 12th birthday in 2016, Dylan was put on a ventilator, but his lungs continued to shut down. After doctors told the Thomas family Dylan had a slim chance of surviving at this point, he turned a corner. Two months later, after more treatment, Dylan was taken off the ventilator.

"Dylan survived what doctors said he wouldn’t and did not have any physical or mental setbacks," said Thomas, " He was the same child he was before the chemo induced setback." In December 2016, Thomas says her son received his first bone marrow transplant through an unrelated donor.

"For 100 days we had to live next to the hospital," said Thomas. Until June 2017, Dylan stayed in remission, but soon the Thomas's found out Dylan relapsed.

"My heart is with all my fellow mamas who don’t have a back to school picture this year of their babies, or for years to come."
Cloie Thomas

"There was nothing more our home hospital could offer us and thanks to one of our amazing Doctors who had came to UNC from St Jude Children's Research Hospital he got us in the door to an open clinical trial," said Thomas. The family was given a "Make A Wish" trip before uprooting their lives and moving out to Memphis, Tenn. to receive free treatment from St. Jude.

"St. Jude welcomed us with open arms and gave us HOPE," she said. There, Dylan received his second bone marrow transplant with the help of his mother. Her cells were used for the surgery in October 2017. "He did phenomenally. He did everything he was asked to do, was the perfect patient and wanted so bad to do everything right so he would have the best chance at a final remission," said Thomas.

Unfortunately, just days after Christmas that year, Dylan relapsed. The Thomas family moved back to North Carolina to give Dylan a chance to be with his family again. He passed away March 3, 2018 - one day after his mother's birthday.

"Before passing Dylan journaled. He wrote us notes and things he wanted us to do. One of which was to live a “happy” life, and another request was to “make sure the world knew about Childhood Cancer, and help St Jude”," said Thomas.

She says she's made it a priority to honor her son's memory by supporting and fundraising for the organization, hosting toys and supply drives, and blood drives.

"We started a “Dylan’s Random Acts of Kindness” campaign where we designed cards with his story and picture on them to leave when doing something kind for a stranger," said Thomas.