'My Whole Hand Was Black': Student Gets Electrical Burns While Plugging in Laptop at NC High School

Tristian Cline, 16, said he was plugging in his school-issued Chromebook when electricity surged through his body. 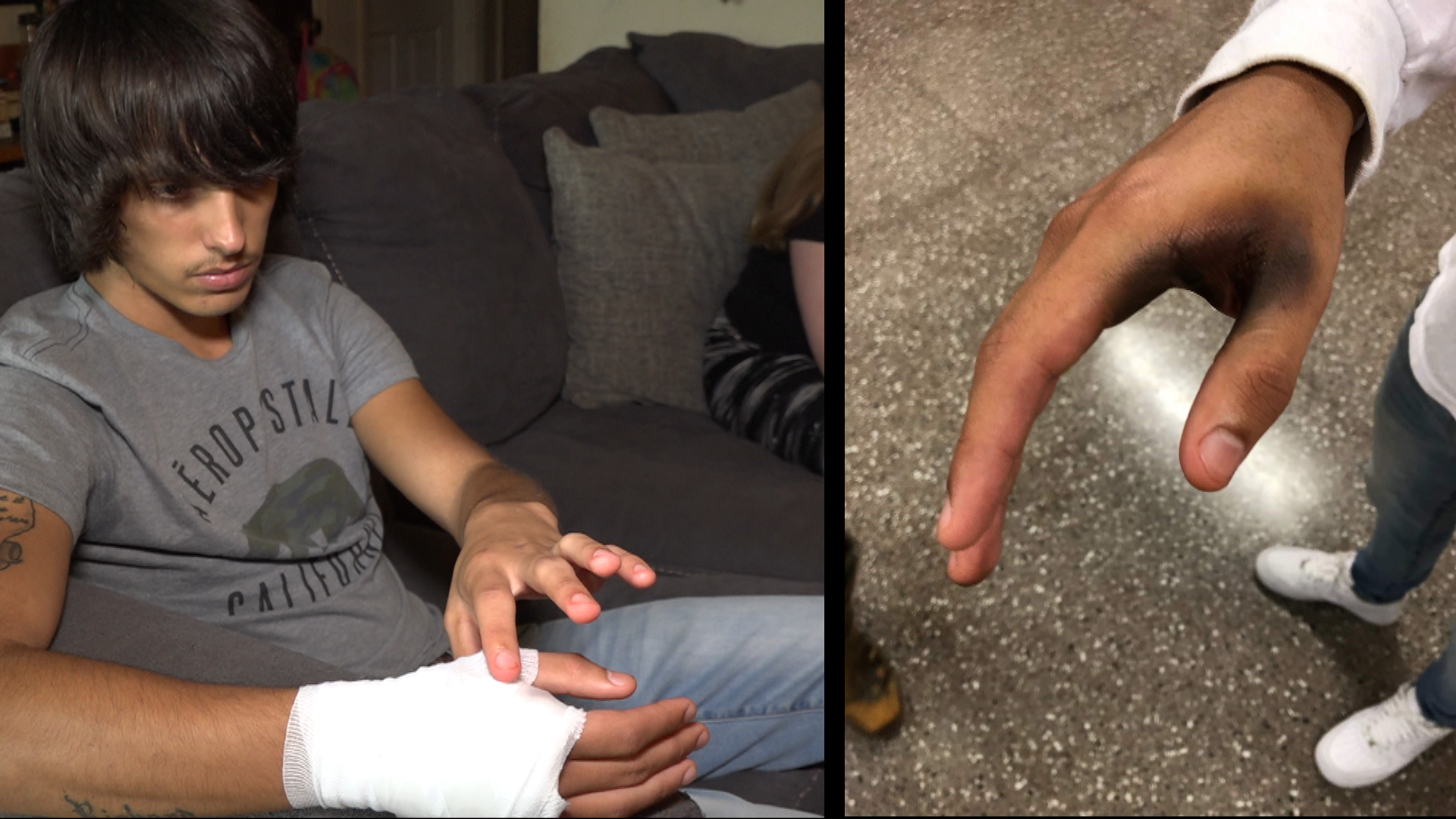 EDEN, N.C. — A high school student was hospitalized after a classroom electrical outlet shocked and burned him while he was trying to plug in a school-issued laptop. Now, his family is traumatized and the teenager isn’t sure if he will fully recover, while the school district’s superintendent is acknowledging the incident but declining to comment specifically.

Tristian Cline, 16, said the electrical injury that left his hand blackened happened while he was in his 10th grade English class at Morehead High School in Eden, NC, on Tuesday, Oct. 1.

The battery had died on Cline’s school-issued Chromebook, a type of laptop. The teenager then pulled out the charger to plug it into a classroom electrical outlet that he had safely used dozens of times before.

"I plug my stuff in there all the time, and it's never been a problem,” Cline told WFMY News 2 on Sunday.

But on that morning, Cline said the electrical outlet severely injured him, especially his right hand.

“When I went to go plug my Chromebook in, it just started shocking me. Sparks went up, flames, it was like it was just holding me there, and I couldn't get my arm loose or nothing,” said Cline.

The sophomore said the electrical shock was so intense, he was unable to pull away from the outlet for about 10 to 15 seconds—an electrical current running through his body the entire time.

"When I got my hand loose, that when I saw the flames,” said Cline. Afterwards, my whole arm was numb, like I couldn't feel anything… My whole hand was black.”

When the electrical shock happened, students around him panicked, jumping over desks, tossing chairs, and screaming, according to Cline’s sister, Rhianna Comer, who was also inside the classroom during the incident.

"I'm sitting there doing my work, and I hear like a, 'POW.' Like something sparked,” said Comer. “I see everybody screaming, kids flipped over desks and just chaotic."

Cline said his teacher then directed him to go to the high school’s nurse’s office, but there was no nurse at the school at that time. The school then contacted Cline’s father to pick him up from school.

"The lady from the school, she was so frantic,” said Nicholas Comer, Cline’s dad. "They're like, 'He's been burnt, and his hand is burnt really badly and he needs to go to the emergency room.' "

Comer and his wife picked up Cline and took him to a local hospital. After an initial evaluation, doctors told the family the teenager needed to be taken to the burn unit at UNC Hospitals in Chapel Hill. The family took Cline there for treatment until he was discharged late Wednesday afternoon.

"His heart rate-- my wife called me several times than night, nervous. She said his heart rate was getting very low to where it was setting the machine off,” said Comer.

Now, Cline is recovering at home with a bandage around his right hand. He has no feeling on his thumb and index finger, and says he feels pain when he tries to push things with his hand.

The 16-year-old isn’t sure what his long-term injuries might be, but he vomited the entire night after returning home, his father said. The family is most worried about their son’s football career, which he plans to pursue.

"The thing I'm worried about is, I love to play football, that's what I'm passionate about,” said Cline. “I've got to put my hands a certain way to catch it, and that's where the ball lands in my hand, and right now I have no feeling in this part of my hand, there is no feeling there."

An electric shock can cause several medical problems, inside and outside the body, depending on the shock’s intensity, duration, and location, according to Merck Manuals.

The electrical current can burn skin, damage nerves, and short-circuit organs like the heart, brain, and muscles. In particular, nerves damaged by electricity can result in weakness, seizures, brain bleeds, and memory loss.

When did the school know the outlet was dangerous?

“On Oct 1, 2019 at Morehead High School a student did get burnt while plugging in their chrome book. The family expressed they were planning on retaining a lawyer. Our legal counsel advised us to not speak on the case. Safety is a top priority for the district and when issue arise, they are addressed immediately.”

Comer said his family has contacted an attorney about the incident.

After the sophomore was shocked by the outlet, the English teacher told the class he had reported the outlet to administration in the past because he believed it was dangerous, according to Cline’s sister who is also in the same English class.

"The next morning when I walked in the class, my teacher, I asked him 'what's wrong with outlet, what happened?' and he was like 'Last year someone stuck something in it, someone threw something at it.' “ Rhianna Comer said. "He told me he reported it to administration numerous times, and nothing was done about it."

Cline also remembers his teacher saying he had reported the problematic plug to school administration directly after the shock.

"When I was getting ready to walk out of the room, I did hear him he say, he mentioned, The English teacher, he said he had been telling them about that, that he had been trying to get them to fix that for a while now, and nothing was done about it,” Cline said.

The teen’s father: ‘It's neglect’

His father, who has worked as an electrician, still has a lot of questions about the incident, and wants other parents to be on alert.

“Maybe it was wired wrong? Maybe someone put more juice to it than is supposed to be to it? Why didn't it kick beaker? Why did it hold onto him that long? Why did it do that much damage? Why did it actually catch on fire?" Comer wonders.

Comer said the school’s principal and district superintendent met the family at the burn unit in Chapel Hill, promising they would be taken care of. But Comer said he fears the medical bills and physical therapy to come will be costly, and he wants the school system to be held accountable.

"You send you kids to school, you think they are going to be safe,” said Comer. "You want your kid to learn and excel in life. And you get a call like that, and it's ridiculous."

Comer said his youngest daughter is now afraid of electrical outlets, and the entire family is still shaken up and recovering.