WFMY News 2 timeline of Silent Sam protests on the campus of UNC-Chapel Hill. 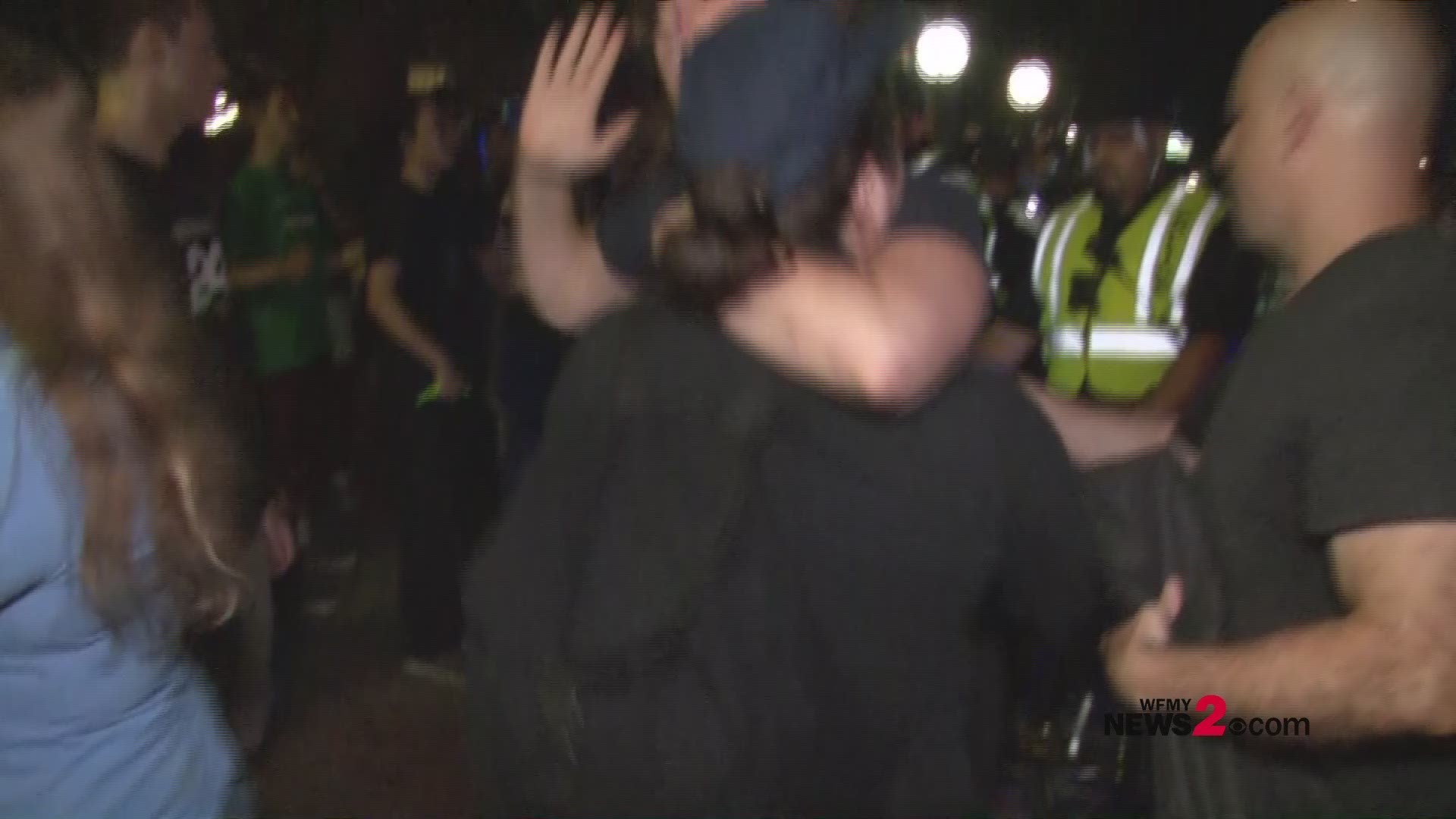 The rally included Confederate monument supporters, demonstrators against the monument and a group opposing both.

WFMY News 2's crews were pepper sprayed among other protesters as the Confederate Monument supporters were leaving while being escorted police officers. The night ended with three arrests and police deploying two pepper spray foggers.

Here's a timeline of how the protests unfolded at the campus.

*WARNING EXPLICIT LANGUAGE AS THIS IS A LIVE PROTEST*

10:30 p.m. - WFMY News 2 has now learned police have arrested three people at the protest and used two pepper foggers during the protests while enforcing crowd control.

10:10 p.m. - WFMY News 2 has learned our crews among other protesters were hit with a pepper fogger dispersed by police near the Morehead Planetarium parking lot to maintain order. No arrests or injuries have been reported from the protest.

9:32 - WFMY News 2's Jessica Winters with an update after our crews were hit with either pepper spray or tear gas as the protest was coming to a close. Our crews including a reporter and a photographer saw campus police spraying the ground with some sort of chemical. WFMY News 2 has a call into the UNC-Chapel Hill to find out what the substance was.

Winters and our photographer said they are okay after they were hit with it. Winters said they coughed for about five minutes during the incident. Other students were also hit as well some directly in their eyes. Winters said the crowd had mostly left the protest.

9:15 p.m. - WFMY News 2's Alma McCarty with an update on what happened after being hit with tear gas. McCarty said less than 10 minutes ago those inside the barricade we're being escorted out before the incident occurred.

9:00 p.m. - Our crews seem to have been tear-gassed or hit with pepper spray while walking with protesters alongside Confederate Monument supporters and those in opposition to them.

8:56 p.m. - Man dancing around with Confederate flag in front of those in opposition. Tensions extremely high at the moment. Lots of screaming and shouting. Police are escorting monument protesters as they walk away from the site. Police are using their bikes in front of them as a shield to help prevent violence. No one has been arrested at this time after checking in with UNC school leaders. Protesters following Confederate Monument supporters as they leave.

8:32 p.m. - Lots of groups of officers on campus in different areas monitoring the protests. Officers are not just around the Confederate Monument. Greensboro Police are also helping with the protest and crowd control.

8:06 p.m. - There are areas of the protest that include a dance party on the other side of the demonstrations which are more peaceful including the Twilight Service for the Silent Sam statue. Mostly students staying in this area and are dancing around. Students want to keep the Silent Sam statue down.

8:00 p.m. - Campus police escorted a man with a confederate flag past the barricades by what once stood Silent Sam following intense moment at the protest

7:55 p.m. - Protests becomes more intense as a man used explicit language while confronting group on the scene at the rally supporting Confederate monuments

7:35 p.m. - Already more people here by Silent Sam than on the protest Saturday.

Some officers have put on riot gear @WFMY pic.twitter.com/OaMMrNhhln

7:11 p.m. - Police standing inside the barriers by the Silent Sam pedestal, no big crowd yet on campus

Police standing inside the barriers by the Silent Sam pedestal, no big crowd yet on campus @WFMY pic.twitter.com/zcG3ub1Nfm

5:30 p.m. - Supporters of Confederate Monuments are expected to gather at Silent Sam tonight

A week ago, protesters used ropes to pull down the statue during a demonstration attended by hundreds.

The statue was toppled just a day before a committee was to meet in Raleigh to talk about relocating three Confederate monuments.

That’s after student protesters vowed to take it down before the new school year.

ARRESTS IN CONNECTION WITH TOPPLING

Since then, a fourth person has been charged with helping to topple the monument. That’s after UNC released a new list this week of 14 people arrested in connection with two recent protests.

According to the release, four people were charged with helping to topple the monument during the August 20 protest. A fifth person was charged with wearing a mask before the statue fell.

A North Carolina police officer has been put on leave after the statue’s toppling. He was placed on leave due to a displayed tattoo resembling an anti-government group's logo.

University of North Carolina Chancellor Carol Folt sent a letter to students and staff urging them to stay away from McCorkle Place due to possible rallies. Folt said "several demonstrations" are planned in a post on the university website.

"We know from past experience that when groups with opposing views come together in a highly charged environment, there is a real possibility for demonstrations to escalate to violence," Folt said.

"Your safety is always our highest priority."

Traffic restrictions are in place at parking and loading zones on Henderson Street and at the 100 and 200 blocks of East Franklin Street.