Smokey has already been the beloved mascot of the University of Tennessee since 1953. Now the dog and its owners are celebrating the breed's new status as the official state dog of Tennessee. 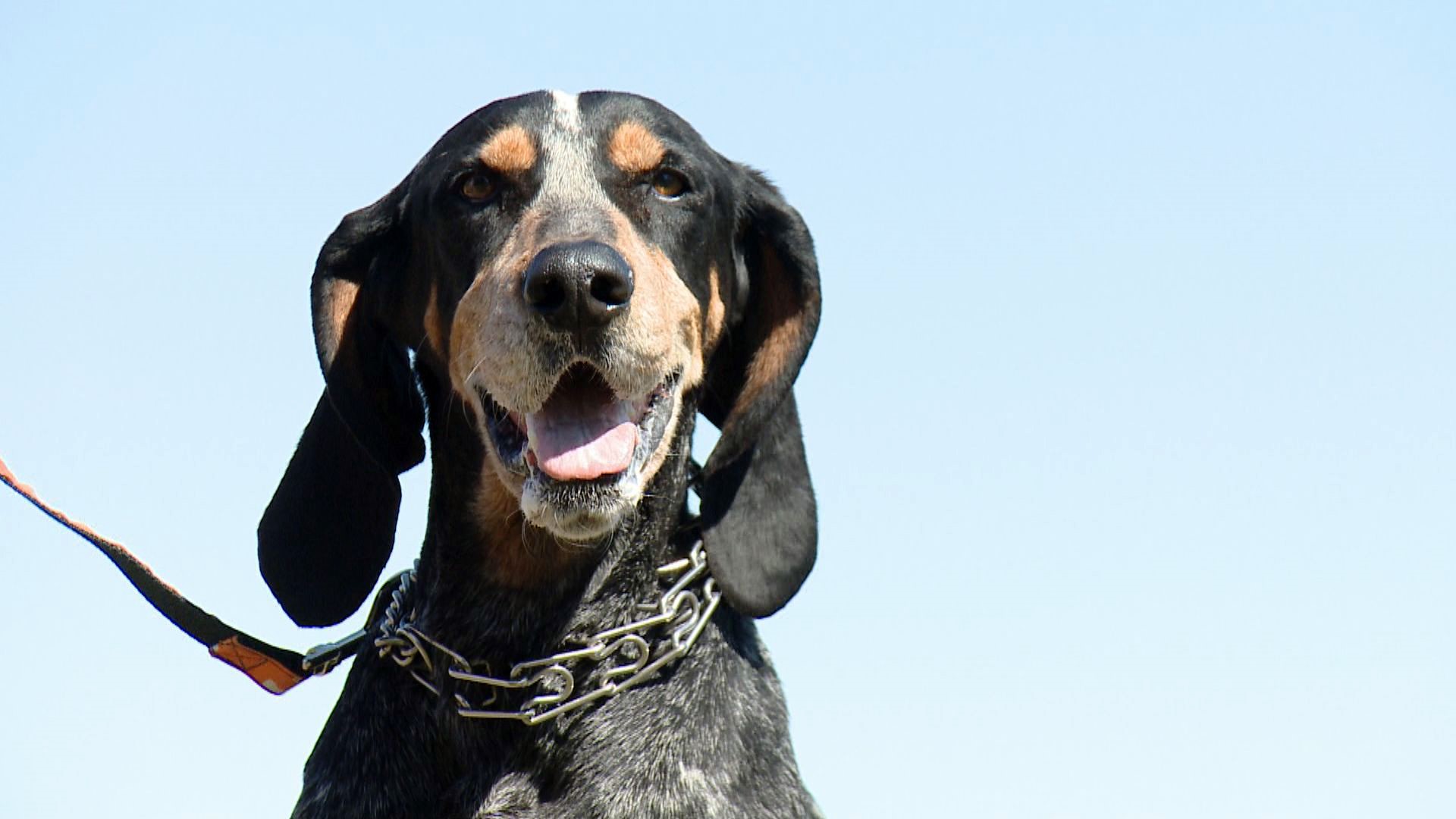 HALLS, Tenn. — This week state lawmakers and the governor unanimously approved the bluetick coonhound as the official state dog of Tennessee.

Fans of the Tennessee Volunteers hardly needed the legislature to cement the breed's status as top dog in the state.  The bluetick coonhound Smokey has been a mascot of the University of Tennessee since 1953.

"We are elated to have Smokey and all other bluetick coonhounds as the official dog of the entire Volunteer State. It is a real Tennessee dog," said Cindy Hudson, owner of Smokey X.

Credit: WBIR
Smokey X, the bluetick coonhound mascot of the University of Tennessee, enjoys a break from training to rest in the grass.

Smokey X's trainer, Sandy Pope, works with just about any breed of dog you can imagine at the Appalachian K9 Training Center.  She says the bluetick coonhound is deserving of its new official statewide status.

"I think it should be. I think if you're looking at a bluetick, you've got the best volunteer you could find," said Pope.

Pope said the bluetick is often bred to be a fearless and tireless hunter.  Not all blueticks are as sweet or socialized as Smokey.  As much as Vol fans love Smokey, the breed is not the best pet for all environments.

"Absolutely not. This dog needs quite a bit of exercise. They can be loud. He certainly would not be comfortable in an apartment or living with a small yard. They need to get out and stretch their legs," said Pope.

Smokey X began his reign as the current mascot in 2013.  He is the first to come from a purely Tennessee bloodline. The previous nine Smokeys were bred in South Carolina.

Pope said Smokey X was a standout in terms of temperament and beauty from the start.

Credit: WBIR
Smokey X, the bluetick coonhound mascot of the University of Tennessee, bays at its trainer for a treat.

"Smokey came to me when he was about five months old. He was just cute as a bug like any other little baby.  One of the biggest things we wanted him to do was pose for pictures.  He can really ham it up for the camera," said Pope.

"He is around a lot of very loud environments with marching bands.  We exposed him to all kinds of different noises.  Some of that was done with the help of community schools. We would take him to different events and get him used to game atmospheres," said Pope.

Credit: WBIR
Smokey X sits on the sideline of Neyland Stadium beside the Pride of the Southland Marching Band during the 2017 game between Tennessee and Indiana State.

The dog's ears are not the biggest challenge when training a Bluetick.

"It is their nose.  Everybody knows how good they are with their nose. And so it can distract from what the job is," said Pope. "It is a challenge, but it is also the breed's greatest strength. We made sure to use activities that utilize Smokey's nose to help train and reward him."

Pope said she treats all dogs like celebrities, but she remains proud of Smokey's performance and behavior while representing the state.

"People get very excited when they see him and that has just been an extra joy for me. He makes a lot of people happy," said Pope.

1 / 25
mzub
The Zebra Swallowtail was designated as Tennessee's official butterfly in 1995. This beautiful, winged insect has black and white stripes that run the length of its body with red and blue spots on its lower back.