The former president addressed more than 1,200 convention-goers Saturday in Greenville. 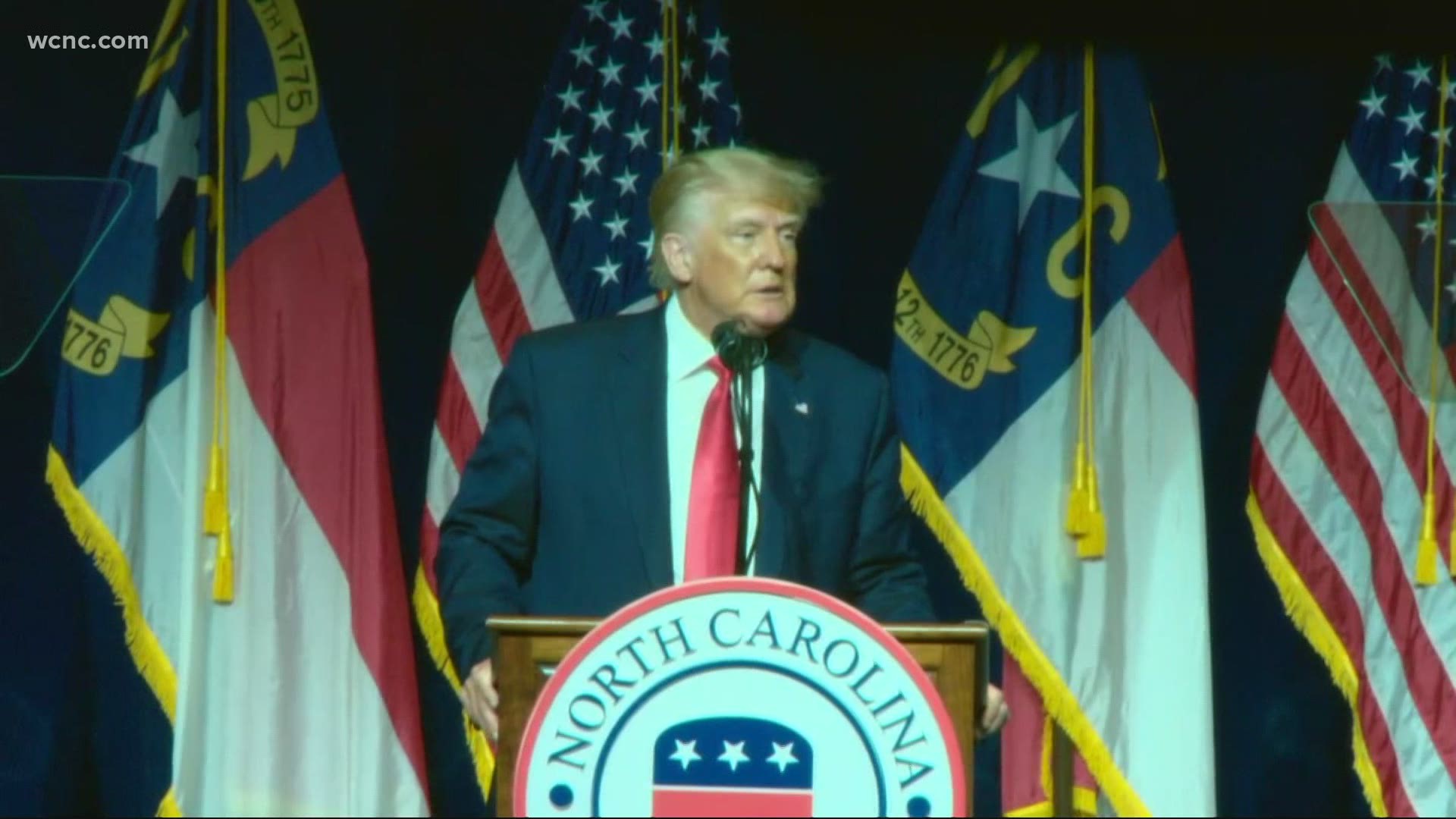 Trump addressed more than 1,200 people at the convention in a state he won in 2016 and 2020. During his speech, Trump launched into a law-and-order message, criticizing the "Defund the Police" movement before moving to criticisms on "cancel culture."

Trump teased the prospect of another presidential bid of his own in 2024 but vowed first to be an active presence on the campaign trail for his allies in next year's fight for control of Congress.

Former Pres. Trump launches into a law-and-order message, criticizing the "Defund the Police" movement before moving to his criticisms on "cancel culture."

“The survival of America depends on our ability to elect Republicans at every level starting with the midterms next year,” Trump charged.

"The gentleman is going to fight like hell," Trump said.

"We got a lot of hard work ahead so let’s win this together and let’s get back to making America great again," Budd said.

Trump made the endorsement while McCrory was sitting in the audience.

"I’m disappointed that President Trump has endorsed a Washington insider who has done more to oppose the Trump agenda than anyone in this race. We will win this race – the primary and the general." McCrory said. "Ted Budd opposed President Trump’s plan to secure the border, to support our farmers, to repeal Obamacare, and he even voted against President Trump’s COVID vaccines.'

I’m disappointed that President Trump has endorsed a Washington insider who has done more to oppose the Trump agenda than anyone in this race. We will win this race – the primary and the general.

Lara Trump also was present at the convention and took to the stage to announce her plans to not run for Senate in 2022.

"It is going to be very hard for me to enter this senate race right now," Lara Trump said. "I'm saying no for now; not no forever."

BREAKING: "I'm saying no for now; not no forever." - Lara Trump says she will not run for U.S. Senate in 2022 though she considered it. She cited her children's young age as the reason. More @wcnc pic.twitter.com/6eglJd92Ry

While Trump has had to work harder to make his voice heard since leaving office, he remains a commanding force in the Republican Party. A recent Quinnipiac University national poll found that 66% of Republicans would like to see him run for reelection, though the same number of Americans overall said they would prefer he didn’t.

“Donald Trump’s speech tonight is further evidence that the North Carolina Republican Party has fully transformed into the Party of Donald Trump. The NC GOP continues to double down on conspiracy theories, destroy our democracy, and abandon truth to pledge loyalty to one man. They’ve made clear their only priority is to defend Trump above all else.

While the GOP circus continues in Greenville, President Biden and North Carolina Democrats in Congress are hard at work delivering for Americans and leading us out of this pandemic. Thanks to the American Rescue Plan, working families bearing the brunt of this crisis received $1,400 direct checks in the mail, funding to get more Americans vaccinated, and the resources to get our kids and teachers safely back to school. President Biden and Democrats are leading us out of this pandemic, boosting our economy, and getting folks back to work, while Republicans have stood in the way at every step.”

The Democrats will use in-person door-knocking and phone banks to promote what they describe as President Joe Biden’s successful early-term agenda.

RELATED: Biden’s claim of historic job creation at the start of his presidency needs context