On Friday and Saturday, at least 6 coyote attacks have occurred and 4 people have actually been bitten. "It was not defending itself, it was attacking." 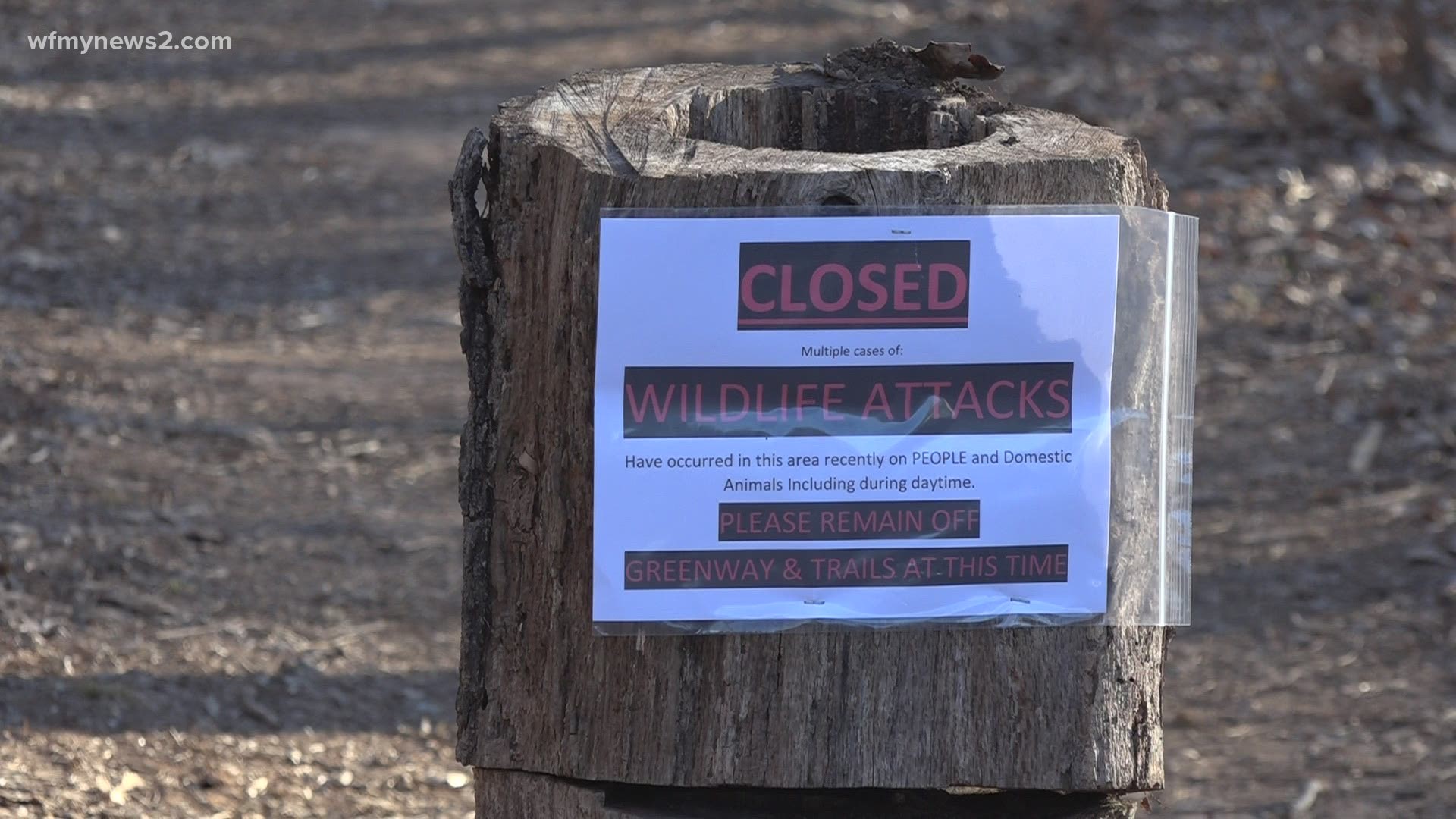 On Friday and Saturday, at least 6 coyote attacks have occurred and 4 people have actually been bitten, according to witnesses who spoke with WFMY and Guilford County Animal Control.

The attacks have led Guilford County Animal Control to coordinate with N.C. Wildlife Resources Commission to knock on doors warning neighbors who live nearby in the Owls Roost subdivision.

On Sunday, police tape and warning signs had been placed to block off trails at Lake Brandt Park.

“CLOSED. Multiple cases of WILDLIFE ATTACKS”: Warning sign at a trail at Lake Brandt Park in Greensboro. At least 4 people have been bitten by a coyote, and at least 6 attacks have happened, according to officials and witnesses. @WFMY pic.twitter.com/bKY9YnEFIG

"Citizens are advised to stay off the trails until it is deemed safe. The marina remains open to the public and the affected trails have also been posted with signage," Greensboro Police said in a statement.

WFMY News 2 spoke with a mountain biker, Derik Broach, who was attacked by a coyote on Saturday, but was fortunate enough to escape without being bitten or scratched.

Broach, a Greensboro resident, said he used his mountain bike as a shield and defended himself with pepper spray against the coyote, which he said charged at him unprovoked on the Wild Turkey trail.

"I stopped on my bike, and as soon as that thing saw me, it started running towards me, and that was terrifying," Broach said.

Broach said he went into "survival mode," blocking the coyote with his mountain bike. The animal bit into his tire as it tried to attack him, Broach said.

For what Broach estimates to be 30 seconds, the coyote wrested with his bike while Broach utilized pepper spray to defend himself. The coyote eventually gave up and retreated, but turned around and tried to attack the man again before finally dashing off.

"It was not defending itself, it was attacking, and that's what's very scary," Broach said.

How to survive a coyote attack

If a coyote approaches you in a threatening manner, you should yell, wave your arms, or throw something at the coyote, according to urbancoyoteresearch.com.

Experts say to never run away from a coyote, because they are much faster than humans -- reaching speeds of about 40 miles per hour.

Stop. Don’t run. If you do, the coyote may chase.

Make yourself look big. Put your hands over your head or pull your shirt or jacket up over your head. Look as big as you can to scare off the coyote.

Announce forcefully, “Leave me alone!” Repeat if necessary. This lets the coyote know you’re a threat, and it lets people around you know that you may be in trouble.

Retreat. Back away slowly. But don’t turn your back on the coyote.

Teach your friends and neighbors about coyotes, and instruct children to report coyote encounters to adults.

(Editor's note: A previous version of this story incorrectly stated Mr. Broach's first name as David. It is Derik.)