In his first extensive interview since losing his 2016 re-election campaign, former NC governor Pat McCrory talks candidly about controversial issues of his past and ponders another run for political office. 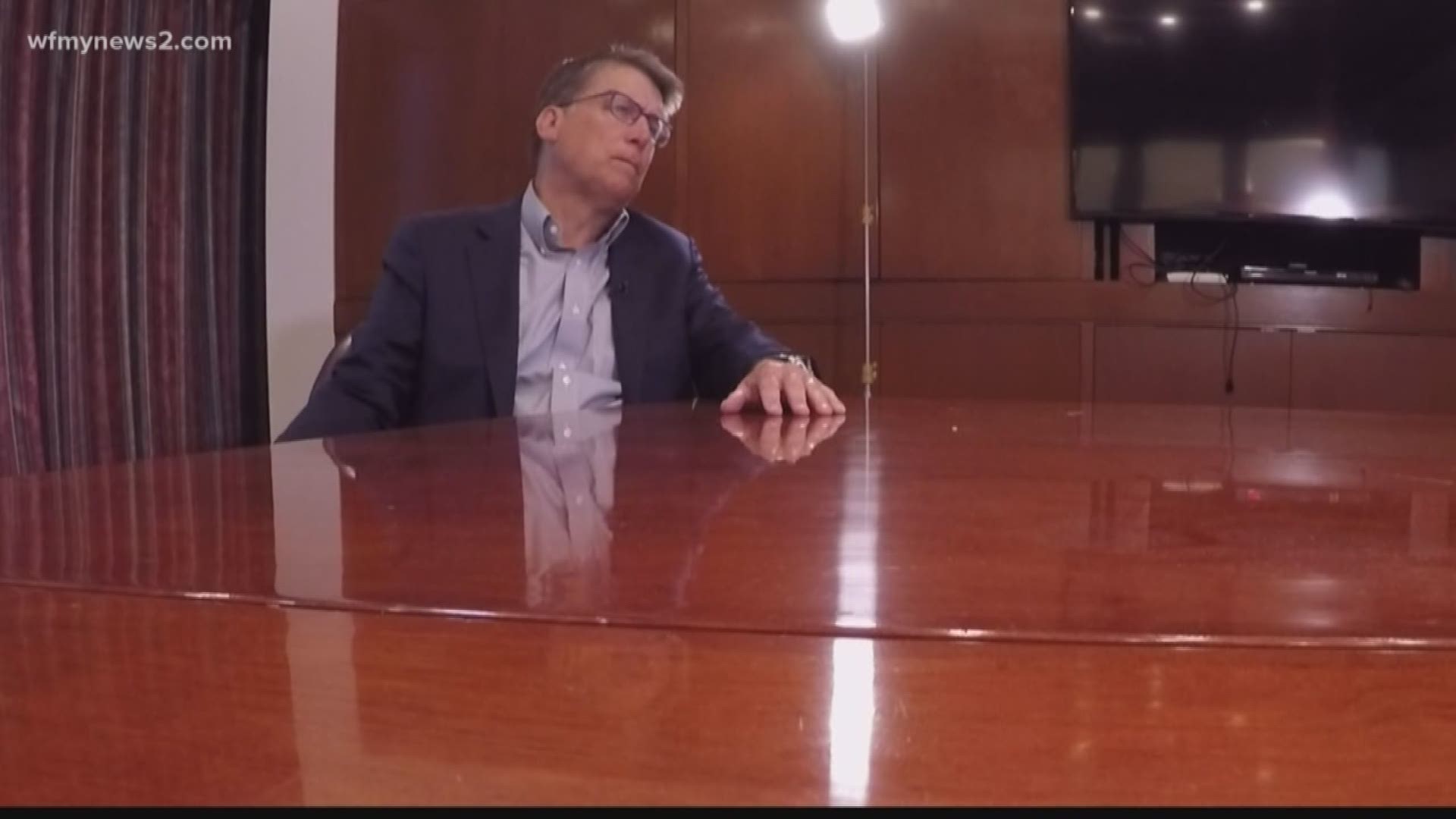 In November 2016, a chapter closed on Pat McCrory's political career. Even still, the seven-term Charlotte mayor-turned-74th governor's notoriety precedes him, as passers-by on the Charlotte Light Rail stop him to ask for a picture or discuss a current issue.

But, public sightings of McCrory are rare. Since the election, McCrory uncharacteristically kept a low profile in public, and hardly anyone knew why until now.

"The adjustment of moving out of the governor's office on New Year's Day very quickly with no fanfare and then being dropped off at my house in Charlotte with a handshake, a thank you and security leaving was a very tough adjustment for not only me and my wife, but also my extended family, because of the many threats we got over the four years," McCrory said. 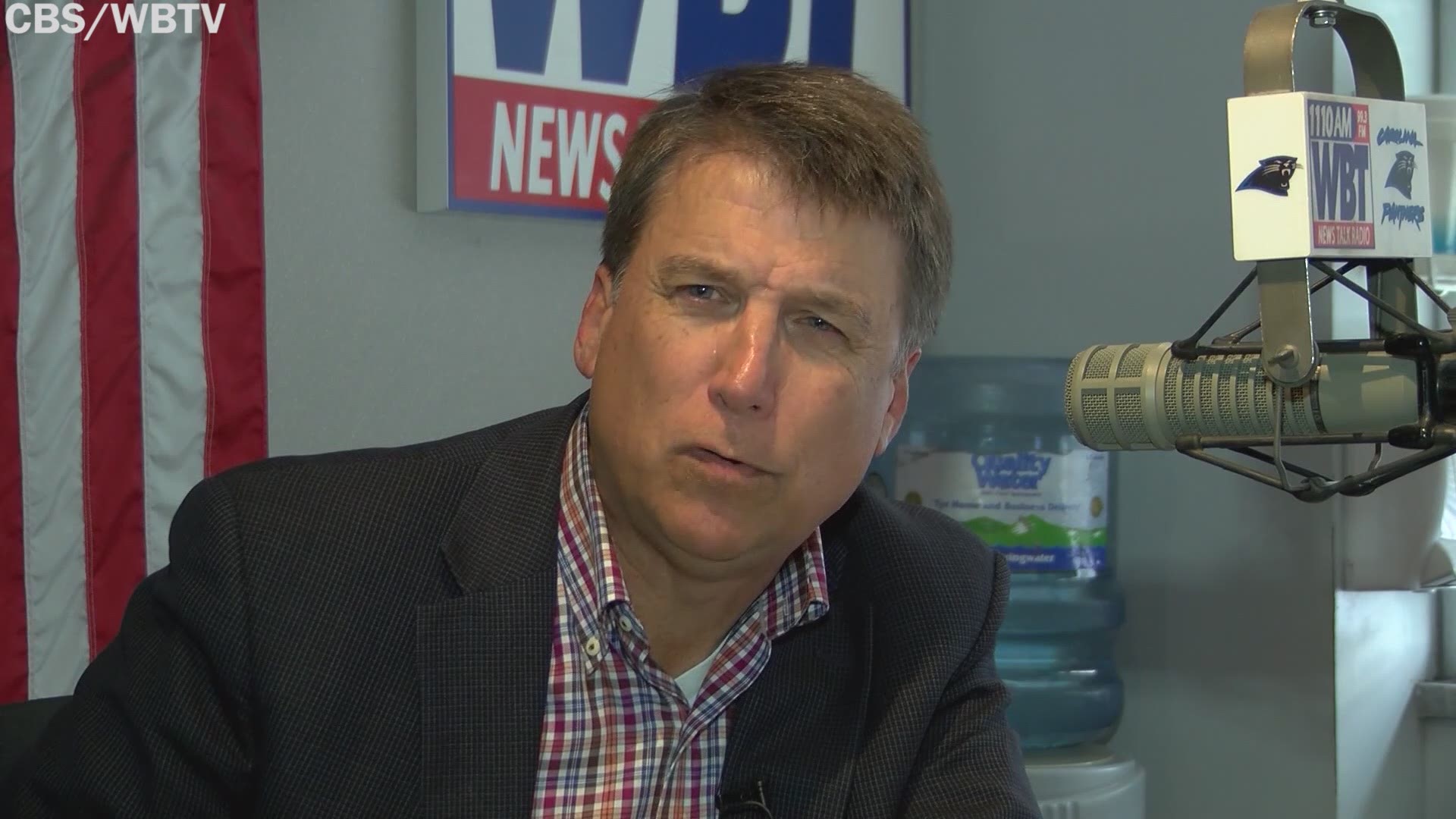 "I miss the decision making, the leadership, the teamwork and making a viable difference. I think everyone wants to be relevant in their own way," he admitted.

For McCrory, staying relevant means staying tuned in. He hosts and co-produces the Pat McCrory Show with Bo Thompson, airing for two hours every weekday on WBT radio.

"We're at least providing some sort of educational service from a different perspective and at points, some humor, because sometimes politics are taken too seriously," he laughed.

When in front of the radio mic, he sounds like the same Pat McCrory who once led a great state -- an impassioned leader who hoped conviction would carry him through November 8, 2016.

"Were you confident going into election night?" asked Mollerus.

"We knew it was neck in neck. We thought we were going to win. I was with then-candidate Trump the night before in Raleigh, and I thought I would be winning, and he would be losing," he said.

In the end, Donald Trump took North Carolina with 49.84 percent to Clinton's 46.17 percent. But, McCrory lost to then-attorney general Roy Cooper by approximately 10,000 votes. A recount did not change the outcome, and weeks later, he conceded.

"If there's one reason you lost the election, what do you think that is?" Mollerus asked.

Among them, he suspects, was Lon Cecil, the libertarian candidate who took 100,000 votes.

Another reason -- his former employer, Duke Energy, which critics accused McCrory of favoring even after the 2014 coal ash spill. They also jabbed him for opposing an oversight commission on Duke Energy.

"I didn't oppose an oversight commission. It was an oversight issue of the legislature having control over the executive branch, which is against the constitution, and the Supreme Court agreed with me on a very strong majority," McCrory said.

And, voters could not forget the I-77 tollway, a 26-mile project connecting Mooresville to Charlotte. A decade ago, it had bipartisan support before contractor problems and resident resistance.

New I-77 pricing shows after the first six months, it will cost a commuter nearly $10 one way during rush hour.

"Do you see a problem with that?" Mollerus asked.

But, perhaps the biggest cause of campaign controversy involved bathrooms. In February 2016, the Charlotte City Council expanded its non-discrimination ordinance. Any business providing a public service could not discriminate based on gender identity. Any violation would have carried a criminal misdemeanor.

Concerned it would allow men in women's restrooms, the republican-led legislature passed House Bill 2, which McCrory signed into law. In part, it required everyone to use the bathroom corresponding to the sex on their birth certificate.

The LGBT community cried foul, and North Carolina lost an estimated 3.7 billion in NCAA championships, a big business deal with PayPal and tourism as other states implemented travel bans.

"So, if you could go back, you would not change it," asked Mollerus.

"You know, one lesson I've learned is that you can't go back. But, listen, the fact of the matter is the whole issue was political. North Carolina was being used as a political pawn by liberal activist groups that targeted North Carolina to be the epicenter on an issue in which there was no problem to begin with," he said.

"What's ironic is the same law is in place today, and it's one of the best-kept secrets," McCrory said.

Because, he notes, the repeal bill had a caveat -- cities could not pass their own non-discrimination ordinances until 2020.

"What do you think will happen to this in 2020?" asked Mollerus.

"It's gonna be interesting. I hope our nation and our state ensures there's no discrimination based on sexual orientation, but I also believe sexual identity should be based on what the doctors say," McCrory said.

Obviously, McCrory prefers to remember other points of his political tenure, like his on-the-ground response to Hurricane Matthew and the subsequent flooding, eliminating North Carolina's federal debt and much smaller projects, like the Charlotte light rail.

But, McCrory said the past is the past. He has been full steam ahead, keeping busy. He went back to his teaching roots with a student-led class at UNC-Chapel Hill.

He enjoys quality time with his wife Ann, basketball games with his godson, outings with former governors, golfing with friends and most of all, relaxing with his favorite dog at their favorite place, Lake James.

"So, I've got a good life. I don't miss being governor. I miss the job of governor," he said.

"Are you going to run for governor again, in 2020?" asked Mollerus.

"I don't know. I'm being totally truthful to you. I have not made that decision yet... There are some days I want to re-enter public office, but there are some days where I'm not getting threats, and my wife is happy, and I go why get back into that game?" he replied.

He said if he does run again, it most likely will be for Governor in 2020 or U.S. Senate in 2022, as Senator Richard Burr has indicated he will not seek another term.

As for McCrory's legacy, he said, "You know, one thing I've learned in politics is if you want to be remembered, don't get into politics."

For now, McCrory said he is enjoying life as it comes and not closing doors on opportunities. And, while the power of the people can take a governor out of office, it can't take a true tarheel from the Old North State he calls home.

"I plan to make North Carolina my home for life. We live in the best state of the United States of America, and I'm going to keep pressing whether I'm in public service or not for those leaders to make those tough decisions, even if it means they won't get re-elected."

In his full 45-minute interview with Meghann Mollerus, McCrory discusses various topics, from coal ash to immigration to the Atlantic Coast Pipeline project. In it, he makes certain claims against his former opponent, current governor Roy Cooper. WFMY News 2 reached out to Cooper's office for responses to these claims, and his spokesman Ford Porter provided the following:

"Governor Cooper is working tirelessly to improve public schools, protect our water, expand health care and create jobs. It's disappointing that the former governor would rather make political attacks than work towards these goals."

Specifically, in the full interview, McCrory accuses Cooper of not following through on his campaign promise to voters to cancel the I-77 tollway project and instead hiring the project's architect to be Secretary of Transportation. Cooper's office acknowledged Cooper did call for the contract to be canceled, but it was too far along. The office also noted Secretary (James) Trogdon's ultimate goal is for the state to assume control over the project and provide concessions to NC drivers in the meantime.

Also in the full interview, McCrory accuses Cooper of suspicious decisions in setting up a $57.8 million mitigation fund with the Atlantic Coast Pipeline (ACP) project. McCrory noted the deal bypassed the legislature and seemed like a quid-pro-quo. Cooper's office announced the mitigation fund with pipeline partners (which allows Cooper to allocate money to various projects in the pipeline's eight affected counties) the same day it announced a major water permit agreement (which gave the Atlantic Coast Pipeline the green light to start construction). Cooper's office said it worked with local leaders and the ACP to provide funds for jobs and offset the environmental impact by funding renewable energy projects in the counties affected by the ACP. 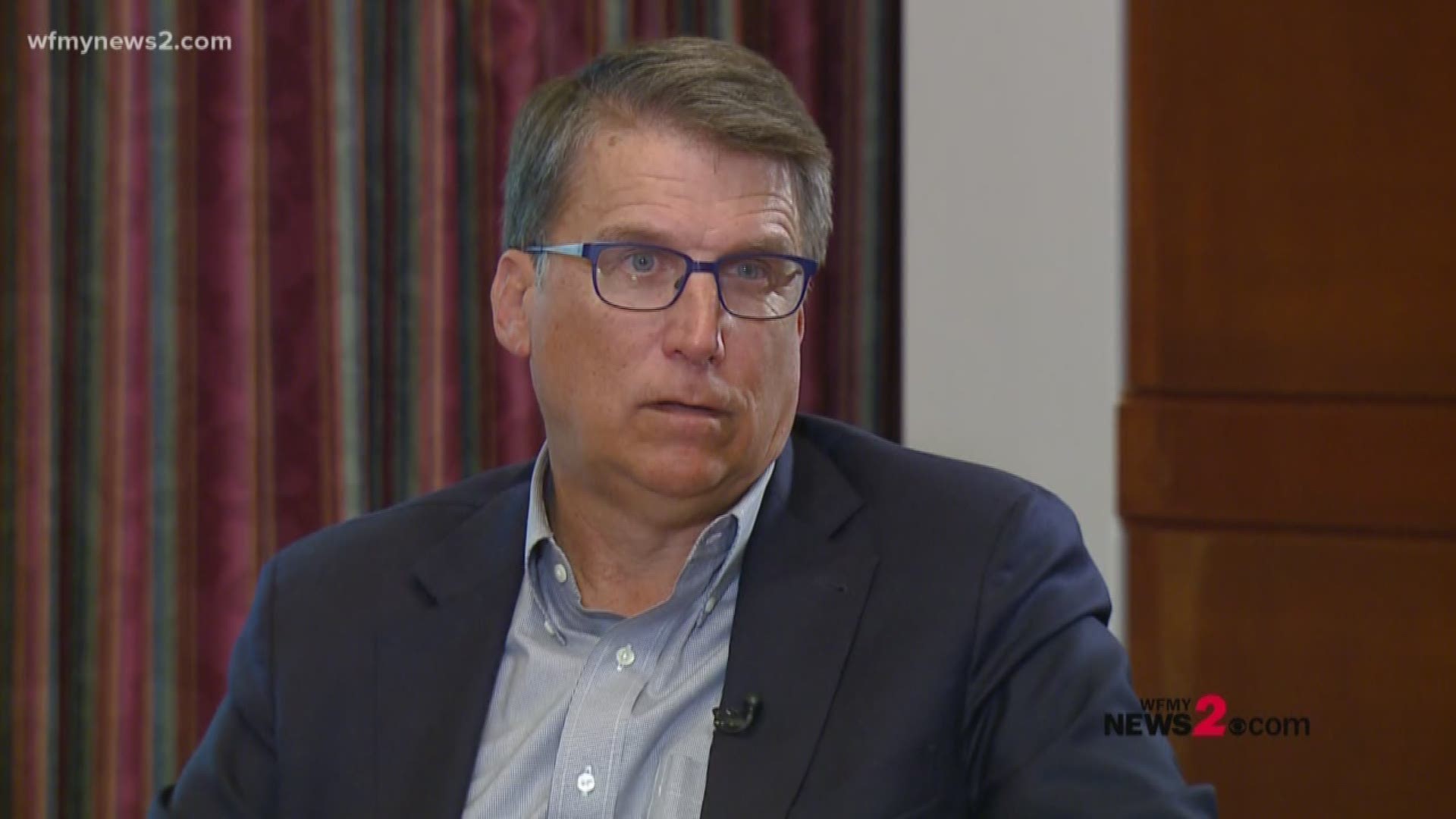 McCrory vs. Cooper on Teachers 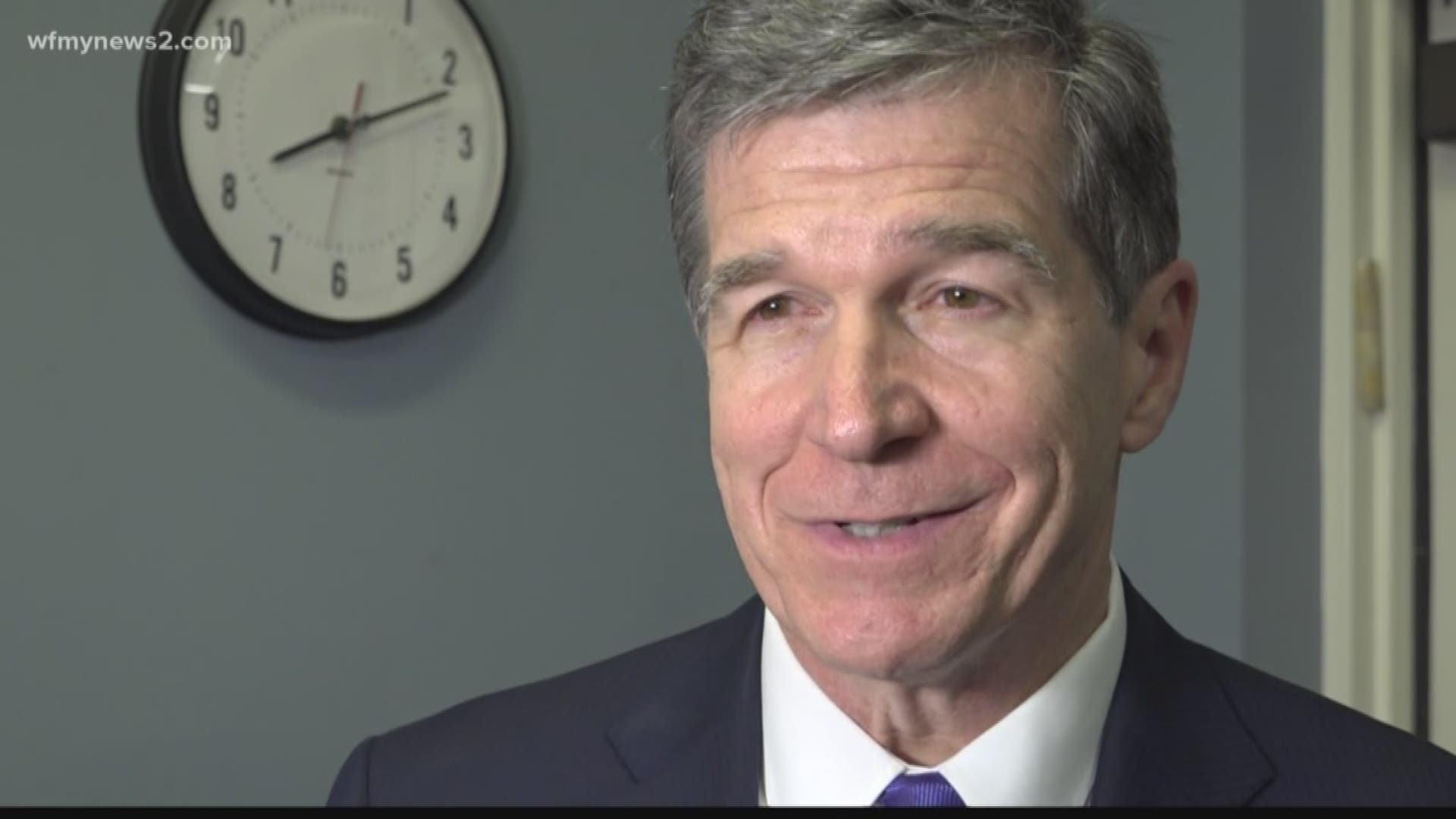 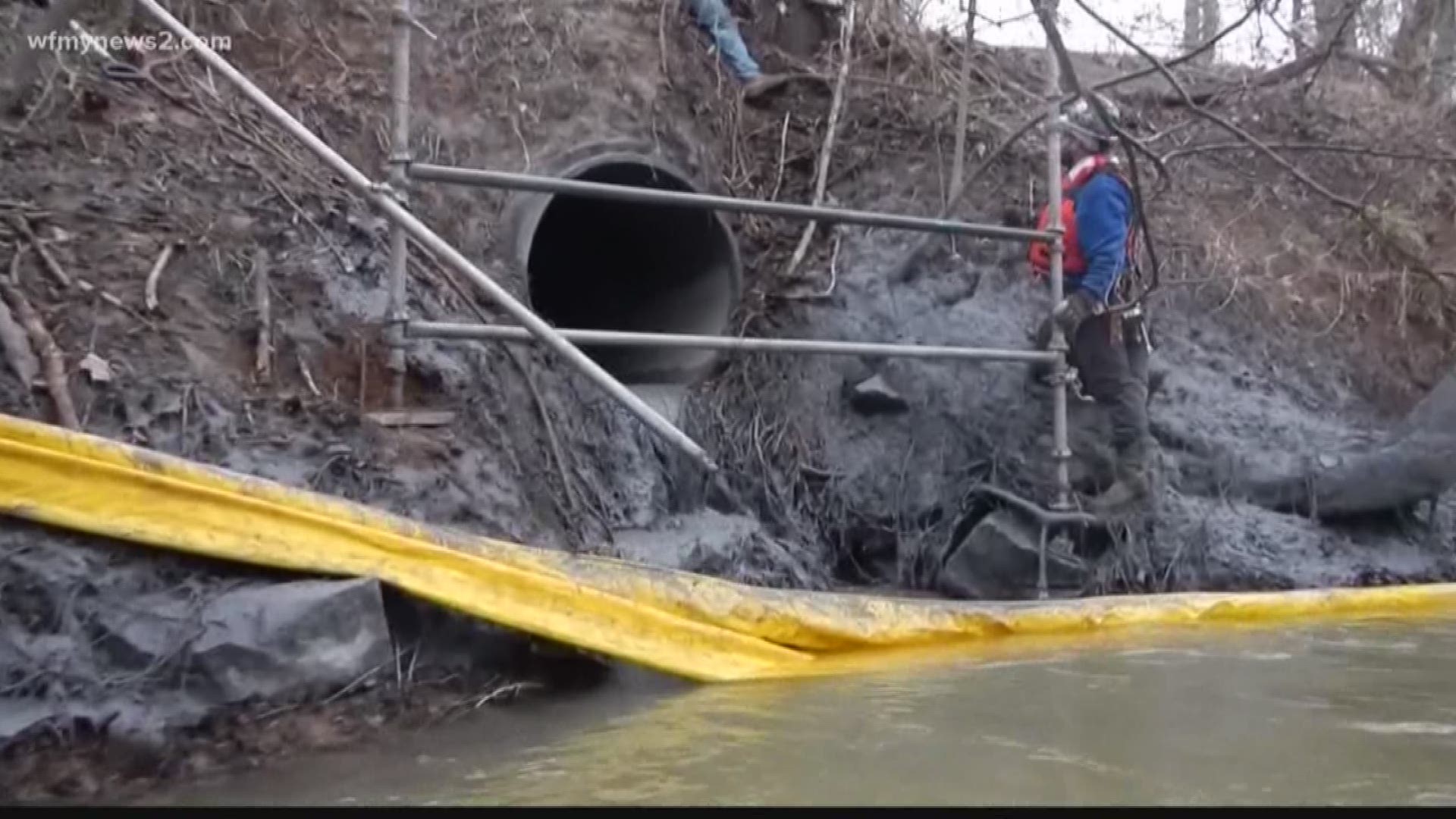 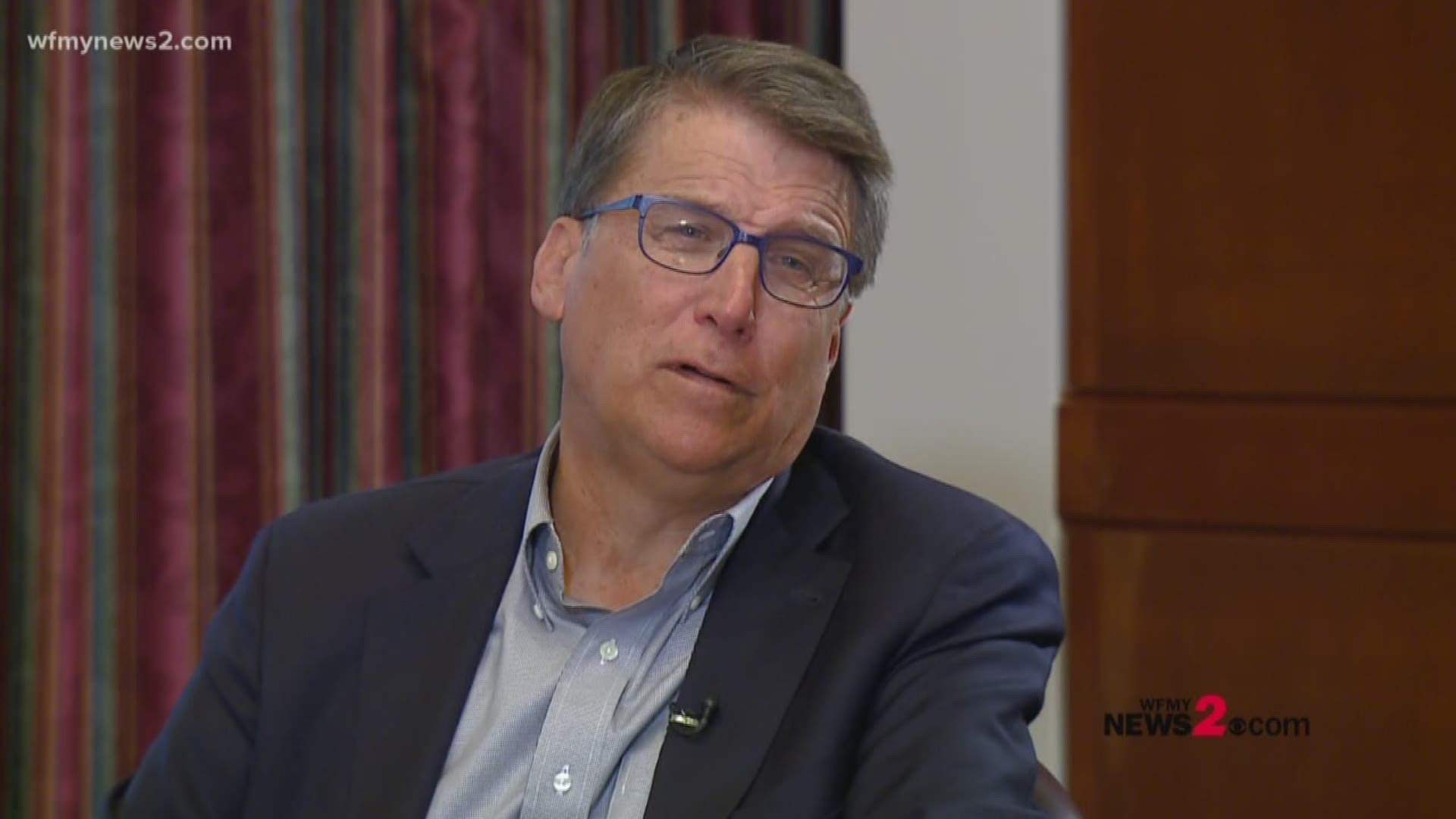