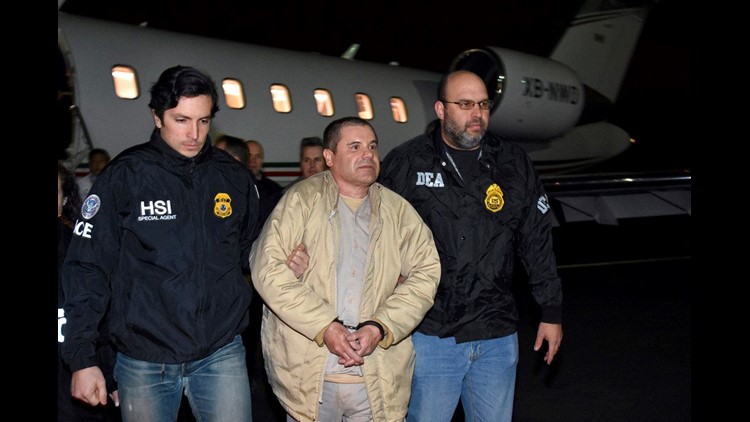 Photo by: U.S. federal law enforcement via AP
This file photo shows federal authorities escorting alleged Mexican drug kingpin Joaquin "El Chapo" Guzman, center, from a plane to a waiting caravan of government SUVs after he was extradited to the U.S. to stand trial on drug conspiracy charges.

NEW YORK – There will be no public displays of affection in court for accused Mexican drug kingpin Joaquín "El Chapo" Guzmán.

U.S. District Court Judge Brian Cogan on Thursday denied Guzman's motion for permission to "greet and embrace" his wife before the court hears opening statements in the notorious druglord's trial next week.

In a two-page decision, Cogan said he was "sympathetic to the request."

The judge said he took note of a Tuesday letter in which defense lawyer Mariel Colón Miró stressed that Guzmán has been held in solitary confinement in a high-security Manhattan lockup for nearly two years without contact with his wife, Emma Coronel Aispuro.

"It can be a brief embrace in open court with the courtroom railing between them," Colón Miró wrote. "This entire process should not take more than a few seconds."

This file photo shows federal authorities escorting alleged Mexican drug kingpin Joaquin "El Chapo" Guzman, center, from a plane to a waiting caravan of government SUVs after he was extradited to the U.S. to stand trial on drug conspiracy charges.
U.S. federal law enforcement via AP

After conferring with the U.S. Marshals Service, Cogan wrote that he was "constrained to deny" the request because it would run contrary to the special administrative measures imposed on Guzmán – a two-time escapee from prison in Mexico.

The judge said he'd previously upheld those measures – including a prohibition on Guzmán "having any physical contact with his wife" – because the restrictions "are tailored to the Government's legitimate objectives of preventing (the) defendant from coordinating any escape from prison or directing any attack on individuals who might be cooperating with the government."

Guzmán is internationally famed for managing to shake free from even the tightest jam.

He allegedly ran the Sinaloa Cartel, the world's largest drug-trafficking operation, even while he was behind bars in Mexico.

Guzmán was brought to the United States in January 2017 after Mexican authorities authorized his extradition to face trial here. The 61-year-old defendant is charged with 17 criminal counts, including drug trafficking, conspiring to murder rivals, money laundering and weapons offenses.

Prosecutors say the Sinaloa Cartel, named for Guzman's home state, made billions of dollars by smuggling more than 200 tons of cocaine into the United States, laundering the profits and then shipping the financial gains to Mexico.

Guzman's lawyers have said the allegations are not credible because they are based on the false testimony of killers and drug dealers.