Corker: Firing Mueller would cause 'upheaval' 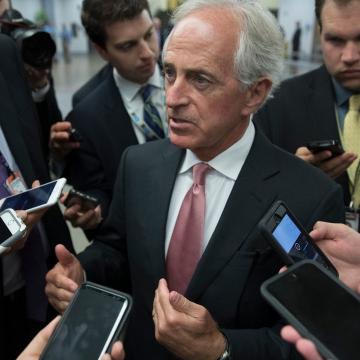 NASHVILLE — It would be a bad idea for the president to fire the special prosecutor investigating the Trump administration, and Congress should look at legal protections to stop a potential firing, U.S. Sen. Bob Corker told CNN on Monday evening.

"I think he needs to leave Mueller alone," Corker said, adding he didn't like Trump's tweets.

Corker, R-Tennessee, expects Senate leadership may include some legislative protection for the special counsel in a spending bill that needs to be passed by the end of the week to keep the government open.

Mueller is investigating possible obstruction of justice by Trump or the president's associates, along with possible criminal campaign coordination with Russia.

The president recently tweeted Mueller's investigation is a "witch hunt with massive conflicts of interest" staffed with "hardened Democrats," prompting a new round of speculation he would fire the former FBI director.

A Trump attorney denied Monday the president planned to fire Mueller. His dismissal would provoke immediate backlash from Republicans in the U.S. Senate, Corker said.

"I think there would be a total upheaval in the Senate," Corker said, when asked how his colleagues would react to a firing.

Corker: Trump "needs to leave Mueller alone. ... I can’t possibly imagine – why Senate leadership wouldn’t place a [Mueller] protection in this omnibus that’s coming through." Hatch: "It would be the stupidest thing the president could do to fire" Mueller. https://t.co/fsTxLcbnHZ

On Monday, the Washington Post reported Trump's attorneys provided Mueller's team with written descriptions of events under investigation. They provided the information in an effort to potentially limit the scope of any future interview of Trump by Mueller, according to the Post.

Earlier Monday, Rep. Steve Cohen, D-Memphis, said in a speech on the House floor that Congress must pass a bill to provide protections for any special counsel threatened with inappropriate removal.

In December, Cohen and Rep. Walter Jones, R-N.C., introduced the bipartisan Special Counsel Integrity Act, which would put in place requirements and limitations regarding disciplinary action against a special counsel or his or her removal from office.

Specifically, the bill says a special counsel could be removed or disciplined only by the attorney general and for reasons that include misconduct, dereliction of duty, incapacity, conflict of interest or other causes, such as violations of Justice Department policy.

Cohen said he was disturbed by the firing of FBI Deputy Director Andrew McCabe, which he called “cruel, un-American and mean-spirited.”

Attorney General Jeff Sessions announced Friday that he had fired McCabe. McCabe had announced in January that he planned to retire and his firing came just hours before his retirement benefits would have set in.

Sessions cited the FBI's handling of the investigation into Hillary Clinton's use of a private email server while serving as secretary of State for McCabe's firing.