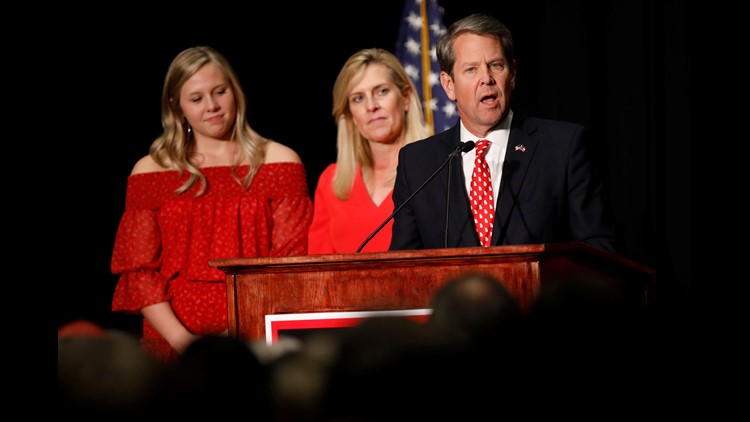 ATLANTA — Republican Brian Kemp has resigned as Georgia secretary of state after declaring victory in the race for governor over Democrat Stacey Abrams.

The secretary of state's office issued a statement saying Kemp's resignation was effective at 11:59 a.m. Thursday.

His departure comes as Abrams refuses to concede until every vote is counted, including about 22,000 outstanding provisional ballots.

Abrams campaign says that it's too soon for Kemp to declare victory and that it is taking legal action to "ensure that every single vote cast by Georgia’s citizens is counted."

"We know our opponent has had the secretary of state's office declare he is the winner. We are here to say we don't accept that," said Lauren Groh-Wargo, Abrams' campaign manager.

Abrams' legal team announced at a press conference Thursday that it was filing a lawsuit against Dougherty County election officials requesting that late absentee ballots still be counted.

Kurt Kastorf, a member of the legal team, said a large number of voters requested mail ballots that were delayed because of an issue with the ballots themselves and then Hurricane Michael. Kastorf said many Dougherty County voters were not given enough time to review, complete and submit their ballots.

Attorneys for Abrams also claim there are hundreds of Georgia voters who cast absentee ballots, including several college students, but there is no confirmation of it being received or counted on the state's website.

Robyn A. Crittenden was appointed to serve as interim Georgia secretary of state.

A spokesman for the Kemp campaign said that with Kemp ahead 64,000 votes, outstanding provisional and overseas ballots would not make a difference.

“Simply put, it is mathematically impossible for Stacey Abrams to win or force a runoff election,” Kemp spokesman Cody Hall said in a statement. "Peach State voters made a clear decision at the ballot box

Kemp supporters have started celebrating on social media, including Georgia Gov. Nathan Deal who posted a tweeted saying: "My congratulations to Gov.-elect @BrianKempGA. He and his opponent both ran passionate campaigns with very different visions about how to keep Georgia on this path of prosperity, and I believe the voters of Georgia made the correct decision in electing Brian."

Critics have been calling on Kemp to resign for months, saying his position as state elections chief was a conflict of interest with his candidacy.

NAACP President Derrick Johnson released a statement Thursday saying it was "unfortunate" that Kemp didn't step down months ago to ensure a fair election.

"Whether it’s malicious intent or benign neglect, Kemp’s actions during the election were textbook voter suppression and surely decreased voter confidence among residents in the state," Johnson said. "His actions were strategic, careless and aimed at silencing the voting power of communities of color in the state, and although his resignation comes at an interesting time, amidst a recount of the gubernatorial race, the NAACP will be closely watching how these events unfold.”

Groh-Wargo said the Abrams campaign was blindsided by Kemp's claim of victory, saying there are at least 25,000 provisional and mail-in ballots that remain uncounted.

She said they were unsure of how many absentee ballots remain, but the Georgia secretary of state’s office said Wednesday afternoon that fewer than 3,000 “non-provisional” ballots were outstanding.

Clarke, Fulton, Hall and Gwinnett counties completed their absentee ballot tabulations Wednesday. Cobb and Chatham were expected to also finish their counts by the end of Wednesday.

According to the statement, county officials reported fewer than 22,000 provisional ballots cast statewide.

Provisional ballots must be verified by Friday. All counties in Georgia are required to certify their election results by 5 p.m. Tuesday.