Diocese of Rochester has paid $1.6 million to 20 sex abuse victims

Diocese of Rochester has paid $1.6M to 20 sex abuse victims 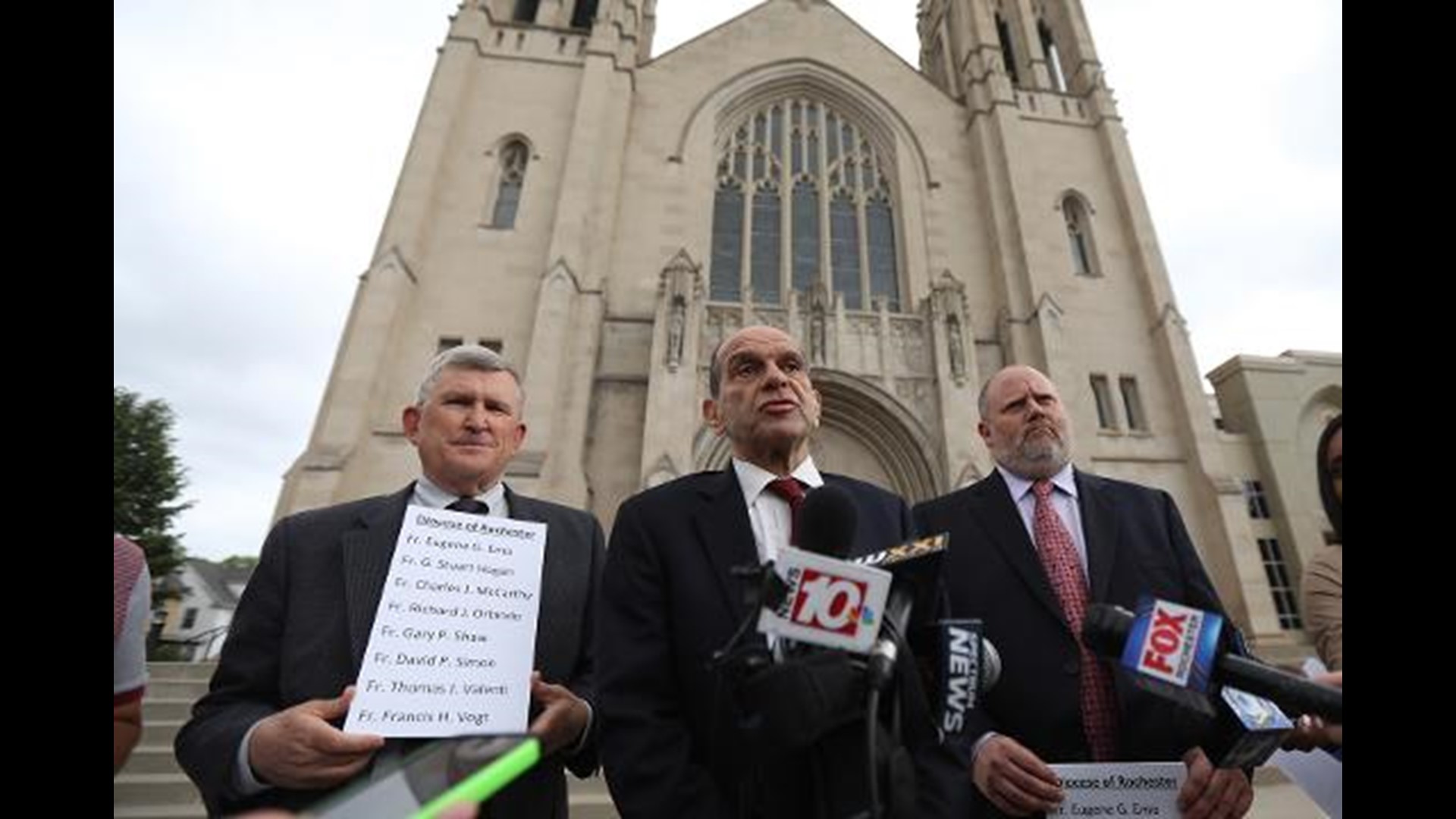 Credit: SHAWN DOWD/@sdowdphoto/, SHAWN DOWD/@sdowdphoto/staff
Mitchell Garabedian, Boston attorney who has represented over 3000 victims of clergy abuse, Robert Hoatson, former priest and founder of Road to Recovery, a victimÕs support organization, and James Faluszczak, survivor of abuse and former priest, hold a press conference on Diocese of Rochester priests accused of abuse outside the Diocese of Rochester on Flower City Park in Rochester.

ROCHESTER — At least 20 children, and probably more, have been sexually abused by 24 priests in the Roman Catholic Diocese of Rochester since 1950.

Over the years, the diocese has paid $1,616,000 in compensation to those victims. The number of victims is likely higher because not all victims accept financial compensation.

Some of the payouts date back decades, although most were settled since the Catholic clergy sex abuse scandal erupted in 2002.

Those figures are according to the diocese, which released them Friday in response to a request from the Democrat and Chronicle following new accusations that it's protecting and enabling pedophile priests.

The accusations were leveled by a lawyer from Boston, who stood outside Sacred Heart Cathedral in Rochester on Wednesday claiming to represent 17 people who allege they were abused by eight diocesan priests over a period of 28 years, ending in 1978.

Five of the priests, three of whom are dead, had never been publicly accused of sexual abuse. The other three were outed many years ago.

The lawyer, Mitchell Garabedian, called on the diocese to release whatever records it has concerning allegations of sexual abuse by clergy, particularly those that identify the accused.

The diocese doesn’t identify clergy merely accused of abuse, but has since 2012 published on its website a list of priests against whom abuse allegations have been determined by the diocese to be proven, usually by acknowledgment from the offending priest.

That list was created in response to a new set of guidelines for dealing with the sex abuse scandal issued in 2002 by American bishops in their “Charter for the Protection of Children and Young People.”

On the list are 23 priests, one of whom, Michael Volino, wasn’t found to have abused a child but was convicted of possessing child pornography.

That leaves 22 pedophile priests who’ve been identified — two short of the 24 that the diocese believes abused children.

Diocese spokesman Doug Mandelaro explained the diocese has withheld the names of the other two priests because they were active and accused in the 1970s, and the list reflects only abuse cases that have been resolved since the publication of the charter in 2002.

That rationale suggests the diocese is still operating in protection mode, and validates suspicions that the diocese has more to reveal. The list is incomplete.

Indeed, the diocese has previously acknowledged six other priests who died before complaints against them were filed. Those six aren’t on the list because the diocese either couldn’t corroborate the allegations against them or take any action against them.

Imagine if the diocese had publicly named the two priests from the ‘70s when it determined, at whatever point in the past, that the allegations against them were credible.

“How far up the chain of command did the sexual abuse go, and how many supervisors knew?” Garabedian asked the other day.

More: Former police officer gets 150 days in jail for sexual abuse of a minor

Unfortunately for Catholic Rochester, this scandal has reached a point that even if Bishop Salvatore Matano himself were to call a news conference and stand before a giant filing cabinet marked “Sex Abuse Cases” and open it up for reporters to pore over, there’d be every reason to ask, “Where’s the other filing cabinet?”

To that extent, Matano and other bishops are in a no-win situation in this matter. But that shouldn’t stop them from being exhaustive in their accounting, including attempting to corroborate complaints against dead priests and publicly identify those found to be abusers.

The names on the Rochester diocese’s list of pedophile priests haven’t changed since the list's publication in 2012. Mandelaro said the diocese hasn’t fielded an allegation against a new priest since then, and that no priest, active or retired, is under investigation.

That’s notable considering the diocese reported in its Catholic Courier newspaper in 2004 that it had received 114 complaints of abuse since 1950, and that victims in so many other dioceses in New York and elsewhere have come forward in the last couple of years.

Sensing it was due, the diocese recently retained Robert Lunn, a retired state Supreme Court justice, to arbitrate abuse cases for $500 an hour and recommend compensation to victims. The diocese has agreed to abide by his decisions.

The diocese is awaiting a formal complaint from Garabedian and his clients before it begins looking into their claims. It has retained McCabe Associates, a private investigations firm in Gates, for the job.

Unlike the Archdiocese of New York, which two years ago created an independent program for victims to apply for compensation from the church, the Rochester diocese has not set aside a pot of money. Its payouts will be financed by insurance reserves, Mandelaro said.

Outside Sacred Heart, Garabedian said he typically resolves his cases for between $100,000 and $500,000, from which he takes a percentage. If he’s successful for all 17 people he claims to represent, that could set the diocese’s reserves back millions of dollars.

Whatever the toll, it will be nothing compared to the toll shouldered by victims, and a small price to pay to open the door to a greater level of healing for the abused, the church and the Catholics its misdeeds have alienated.