Going by TV ads, GOP once split over Trump now in line behind him 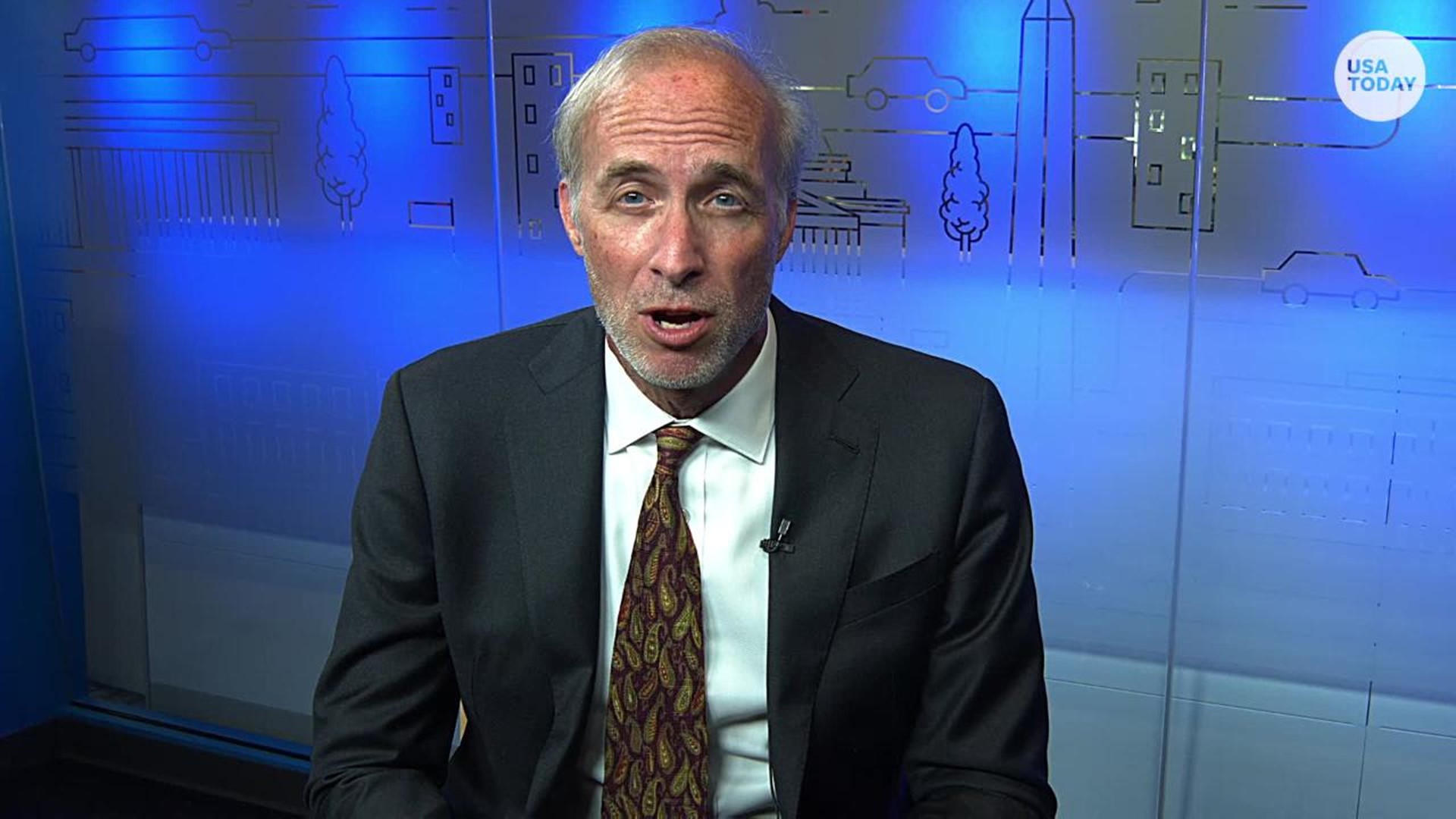 WASHINGTON — President Trump has appeared in nearly four out of every ten GOP ads for Congress this year.

Republicans have praised him, parroted him, promised to drain the swamp and pledged to build the wall.

No GOP candidates for Congress have broadcast ads this year criticizing the president, a telling sign of how a party once divided over Trump has lined up behind him.

“What it clearly shows is that Trump has taken over the Republican Party. There is a benefit to being pro-Trump and a cost to being anti-Trump in the party,” said Ken Goldstein, a University of San Francisco political scientist and expert on campaign advertising.

Trump’s name or image has appeared in 37% of Republican ads for the US House and Senate between Jan. 1 and May 10 of this year, according to data provided to the USA TODAY NETWORK by Kantar Media’s Campaign Media Analysis Group (CMAG), which tracks political ads. Every one of those Trump mentions has been a favorable one, according to CMAG.

Most of these spots have been primary ads aimed at the party base. Some GOP primaries this year have spawned competitions over who talks, acts or thinks the most like Trump. Republicans have faced attack ads questioning their depth of support for the president. In recent U.S. Senate primaries in Indiana and West Virginia, almost half the GOP spots invoked Trump.

“I’m pro-life, pro-gun and pro-Trump. It’s time to build the wall, make English our official language and put America first,” said Indiana Republican Todd Rokita in a spot he ran before his state’s May 8 Senate primary.

“Strategically, it’s a no brainer” embracing Trump in Republican races, said Brad Todd, a GOP consultant and co-author of a new book about the populist Trump coalition called The Great Revolt.

“The President has a brand that transcends the party,” said Todd, who said a pro-Trump message has “no downside” among partisan GOP voters, and is pure “upside” for that part of the Trump vote that is skeptical of both parties.

“You have to be mindful that a big part of your outreach as a Republican candidate is to people who are not so crazy about Republicans or Democrats," Todd said. "That’s a big part of our audience right now.”

That disparity is partly driven by the kinds of races that have seen the biggest ad buys. There have been more contested Senate primaries on the Republican side than on the Democratic side. And the biggest Senate races are taking place in states that voted for Trump, lean Republican, or both.  West Virginia, Indiana, Montana and Wisconsin have seen the most Senate ads this year.

“The Republican primary electorate is still super conservative,” said Democratic pollster Anna Greenberg, referring to the target audience of many of these ads. She said she expected the pattern to look different in the fall in states or districts where Trump lost in 2016 and where some Republicans are less likely to embrace the president in their advertising as they compete for swing voters.

At the same time, said Greenberg, a lot of GOP primary winners are “really conservative” and “aren’t people who are going to pivot (to the center) in the fall.”

Trump has been mentioned in 27% of Democratic ads for Congress, overwhelmingly in a negative light.

“When he comes on TV all I want to do is shut it off. I don’t want my daughter to think that this is normal,” says one woman in an ad for Democrat Sara Jacobs, running in California’s 49th congressional district. (The ad shows widely played 2015 footage of Trump on the campaign trail, with the tag line, “Trump mocks reporter with disability”).

Just under 4% of Democratic ads feature favorable mentions of Trump. Democratic Sen. Jon Tester of Montana accounts for all those ads. Trump carried his state by 20 points in 2016.

In one ad, Tester says, “Washington’s a mess. But that’s not stopping me from getting bills to help Montana signed into law by President Trump.”

In Tennessee, another red state carried by Trump, Democratic Senate candidate Phil Bredesen invokes the president in carefully crafted language that is neither wholly negative nor wholly positive.

“Look, I’m not running against Donald Trump. I’m running for a Senate seat to represent the people of Tennessee,” Bredesen says in one of his ads. “There’s a lot of things I don’t personally like about Donald Trump, but he’s the president of the United States and if he has an idea and is pushing some things that I think are good for the people of Tennessee, I am going to be for it. It doesn’t matter where it came from. And likewise, if I think it’s not going to be good for Tennessee, I am going to be against it.”

While embracing Trump is clearly good politics in Republican primaries this year, that doesn’t mean the brashest Trump supporter has always won.

In the three-way West Virginia GOP Senate primary, Evan Jenkins ran about four times as many “pro-Trump” spots as Patrick Morrisey did, according to CMAG, but Morrisey defeated both Jenkins and former coal executive Don Blankenship, who described himself as “Trumpier than Trump.”

In the three-way Indiana GOP Senate primary, Rokita and Luke Messer invoked Trump in all their ads. Rokita’s ads attacked special counsel Robert Mueller, accusing him of using “fake news to destroy our president.”  They featured Rokita putting on a red “Make America Great Again” baseball cap. But he and Messer lost to businessman Mike Braun. Braun mentioned Trump in only a quarter of his ads, though he told voters, “I’m running because President Trump paved the way.” Braun also had one important Trump attribute: he was running as an outsider against established politicians.

One of the most notable things about Trump’s role in the 2018 ad wars is how different it is from President Barack Obama’s in 2014.

Four years ago, Obama was a much bigger target of Republican ads than Trump has been from Democratic ads. In the same January to May period of 2014, almost 60% of GOP congressional ads attacked Obama.

Obama was also largely ignored in the ads aired by congressional candidates in his own party — another stark contrast to Trump. About 1 percent of Democratic congressional ads in the first several months of 2014 mentioned Obama positively and about 1 percent mentioned him negatively. The rest didn’t mention him at all.  Data for the same early months of the 2010 mid-terms wasn’t available for comparison. But the pattern was similar in the fall of 2010, according to the Wesleyan Media Project: only a small fraction of Democratic ads mentioned Obama.

“Republicans are clearly hugging Trump in a way that Democrats never hugged Obama when it comes to advertising,” said Goldstein, the political scientist and a former president of CMAG. “If you just looked at these campaign ads, it would suggest the person who successfully took over a party and changed the character of the party was Trump not Obama.”

Erika Franklin Fowler of the Wesleyan Media Project noted that what happened under Obama was in some ways closer to the norm.

“It’s highly unusual to have congressional ads touting the president in a midterm where the incumbent president’s party typically loses seats,” said Fowler, because lawmakers in that party don’t want to nationalize their elections. But the intensity of pro-Trump support within the GOP base is pulling Republicans in the other direction, she suggested.

Because of the way that Trump conquered the GOP as a party outsider, invoking him is a signal to voters on the part of a Republican candidates for Congress.

“In the eyes of many Republican voters and independents who lean Republican,” said Todd, the GOP strategist, “if you are not for the president, then you must be against him.”