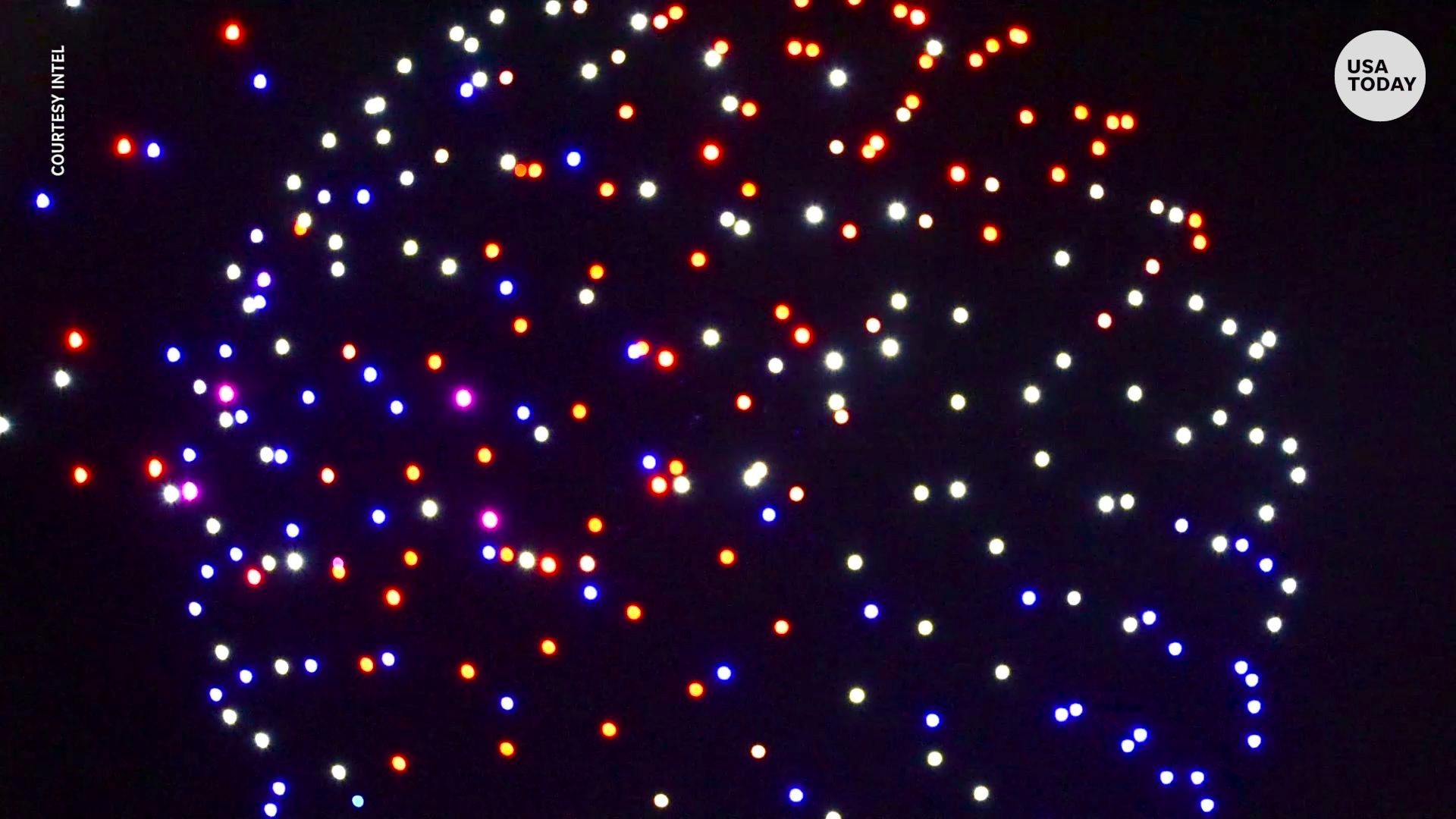 SAN FRANCISCO – Get in the car, kids. It's time to see the Fourth of July drone show.

Towns in California, Colorado and Arizona –  facing another season of drought and wildfire – are turning to drone shows as a less dangerous alternative to organized fireworks, encouraged by the development of jaw-dropping, choreographed shows such as the one Intel prepared for the Winter Olympics broadcast.

Aspen, Colorado, and towns in Arizona  – which had shelved fireworks shows because of fire risk – are experimenting with drone shows. Though a drone show planned for Travis Air Force Base outside San Francisco, just an hour south of the Yolo and Napa county fires forcing evacuations, was postponed until the fifth due to high winds.

These displays have wowed viewers with their animated displays of hundreds of tiny, LED-sporting drones. But a trade group for pyrotechnics maintains: They're nothing without the "Boom!"

Intel's Anil Nanduri, general manager of its drone group, begs to differ. The Travis Air Force Base show plans to use 500 drones and feature a gigantic red, white and blue image of an American flag and California icons, all time-synchronized to music that will be broadcast for the viewers.

"For 12 centuries fireworks were the only way to light up the night sky. Now we have technology that  allows us to do precision animation and storytelling — we can write words and draw objects in the sky," he said.

Some of the research conducted at the base on proper use of small aircraft overlapped with what Intel was working on, and base officials reached out to Intel first, said Capt. Lyndsey Horn, chief of public affairs for Travis Air Force Base.

“We thought, ‘How awesome would it be to bring them out to the base and celebrate the culture of innovation and take advantage of our proximity to Silicon Valley?'"  Horn said.

Travis Air Force Base has never done fireworks before because of fire danger in the area.

What you can see with a drone: Amazing photographs

1 / 38
LAURENT GILLIERON, EPA-EFE
Cars and trucks drive on the highway A1 interchange in Ecublens, Switzerland, May 17, 2018.

One-time drone shows are not cheap, though the cost is less per show if they are done over multiple days because the drones are reusable. But they still are substantially more than firework shows because the technology is still new and evolving. Nanduri said Intel is helping underwrite the cost of the Travis show. "This is a way to thank our troops and celebrate with them," he said.

And much as fire danger can nix fireworks, drone shows are the the mercy of winds.  Officials announced Wednesday morning that high winds in the area were forcing them to cancel the Fourth of July show. While drones can fly in winds up to 18 miles per hour, the forecasted winds for the area are over 30 miles per hour when the show was planning to be flying flying.

The show was moved to July 5th, at 9 pm, pending weather conditions.

Given the high fire danger in the West, officials in several towns are switching to drones.

In Colorado, the Aspen Chamber Resort Association didn't even put in a permit request for fireworks this year because of the likelihood it would be denied due to the dry conditions. Instead, it's swapping out the traditional fireworks show for a drone show by the Great Lakes Drone Company. It will include about 50 drones and be presented to a medley of patriotic music.

Great Lakes Drone Company has received numerous requests for shows to replace fireworks in drought-prone states such as Colorado, California and Nevada, according to Reyna Price, sales and marketing director at the company.

In Cave Creek, Arizona, a bar called Harold’s Cave Creek Corral has put on an Independence Day show for more than 20 years, says Rianna Riego, chief brand and wellness officer at Civana Carefree, a wellness resort that used to partner with Harold's. But town officials rejected firework permit requests due to fire risks.

Instead, Firefly Drone Shows, based in Detroit, will put on two shows this week, Riego says, and they will be drought-friendly and fur-friendly – meaning less stressful for dogs than a firework show .

Fire officials in California, which is experiencing sweeping, destructive wildfires earlier in the season than usual after a costly series of large fires last year, are happy to see the shift towards drones.

From a fire safety perspective, it's "definitely worth it to use a drone over live fireworks,” said Lynne Tolmachoff, chief of public education for the California Department of Forestry and Fire Protection, known as CalFire.

“We’re starting to see them in bigger cities and areas that have the money to do the shows,” she said.

Official firework shows are far safer than backyard fireworks set off by individuals, she noted. In California, for example, all fireworks shows are inspected and certified by the Office of the State Fire Marshall, which also approves what kinds of fireworks can be used.

But there’s always a possibility of an incident or accident with fireworks even if it’s an official show, Tolmachoff said.

“The drones are choreographed and programmed to ensure they don’t fall across power lines, for example," she said.

The only reason to cancel drone shows is if there are high winds. Windless conditions are best, but Intel's drones can manage in up to 13- to 18-mph winds. Above that they are grounded for safety, Nanduri said.

During the Winter Olympics in South Korea, Intel had to scrap at the last minute a planned live show of 300 drones because of logistical problems. Instead, NBC aired a prerecorded light show of 1,218 drones Intel had launched in December.

Choreographed drone swarm shows have been around for at least three years, though they've increased significantly in complexity and power.

One of the first drone shows to reach a national audience was Lady Gaga's Super Bowl 51 performance in Houston in 2017. That show, which included 300 drones, had to be filmed in advance due to FAA airspace restrictions.

Drone shows were performed at the Coachella Valley Music and Arts Festival show near Palm Springs, California, for the last two years and for Disney Springs at the Walt Disney World Resort near Orlando, Florida, in 2016.

Where's the 4th without the boom? 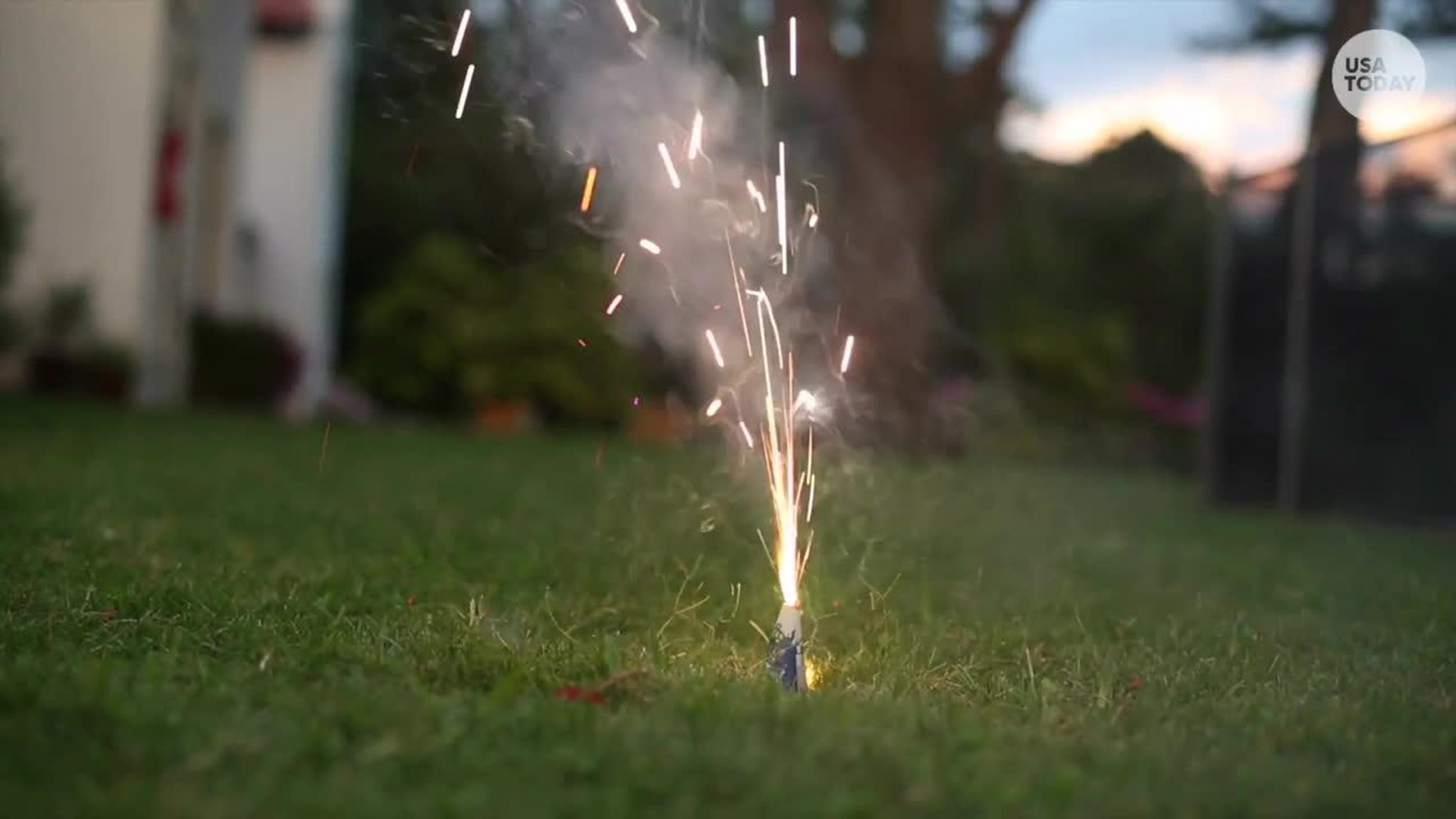 As cool as they may seem, drone shows have their skeptics – namely in the group that represents fireworks suppliers and manufacturers.

Fireworks are a multisensory experience with sounds and colors and a thunderous finale people can feel in their chests, said Julie Heckman, executive director at the American Pyrotechnics Association.

Drone shows, on the other hand, mostly feature a low buzzing, somewhat like a swarm of bumble bees.

“I don’t think a drone display is going to make people 'ooh and ah,' " Heckman said. “There’s a real thrill in being able to light your own fireworks. When they introduced lasers, it didn’t take away from the firework experience at all.”

1 / 29
JOSH EDELSON, AFP/Getty Images
A fire vehicle is surrounded by flames as the Pawnee fire jumps across highway 20 near Clearlake Oaks, Calif. on July 1, 2018. More than 30,000 acres have burned in multiple fires throughout the region.