FORT MYERS, Fla. – Hundreds of sea turtles have washed up on Southwest Florida beaches this year in a mass mortality event that researchers say will impact the recovery of the protected species.

Seventeen have been recovered off Sanibel and Captiva islands near Fort Myers in the past week.

"Our average for the entire year is usually around 30 or 35, but we’ve had 53 in June and July alone," said Kelly Sloan, a sea turtle researcher at the Sanibel-Captiva Conservation Foundation on Sanibel.

Sloan said foundation has picked up 91 sea turtles on the islands since a red tide bloom started in October.

"Most of them have been mature adults, and only one in 1,000 make it to adulthood," Sloan said. "It takes a loggerhead 25 to 30 years to mature, so that really does have a significant impact on their recovery."

Jack Brzoza, a sea turtle technician for the Sanibel Captiva Conservation Foundation, measures the carapace of a dead loggerhead sea turtle on Sanibel Island while Rick Bartleson, a water quality scientist for the SCCF, takes notes. A large number of sea turtles are washing up on Sanibel and Captiva beaches. The suspected cause is red tide poisoning.
Andrew West/The News-Press

More than 100 turtles have been plucked from Sarasota County waters, and another 66 have been found in Collier.

"It’s really disheartening to see this mass mortality," Sloan said. "This is the 10th month of the red tide event, and it’s the longest continued bloom since 2006."

Researchers don't know for sure if red tide killed or injured the turtles, but Sloan said she is "very confident" that the turtles were claimed by the algae bloom because many exhibited neurological symptoms associated with red tide.

The bloom has varied in intensity and distribution, at times stretching from the Tampa Bay area to the Florida Keys.

Recent numbers in Lee County have run the gamut, from background concentrations to 1 million cells per liter and higher. 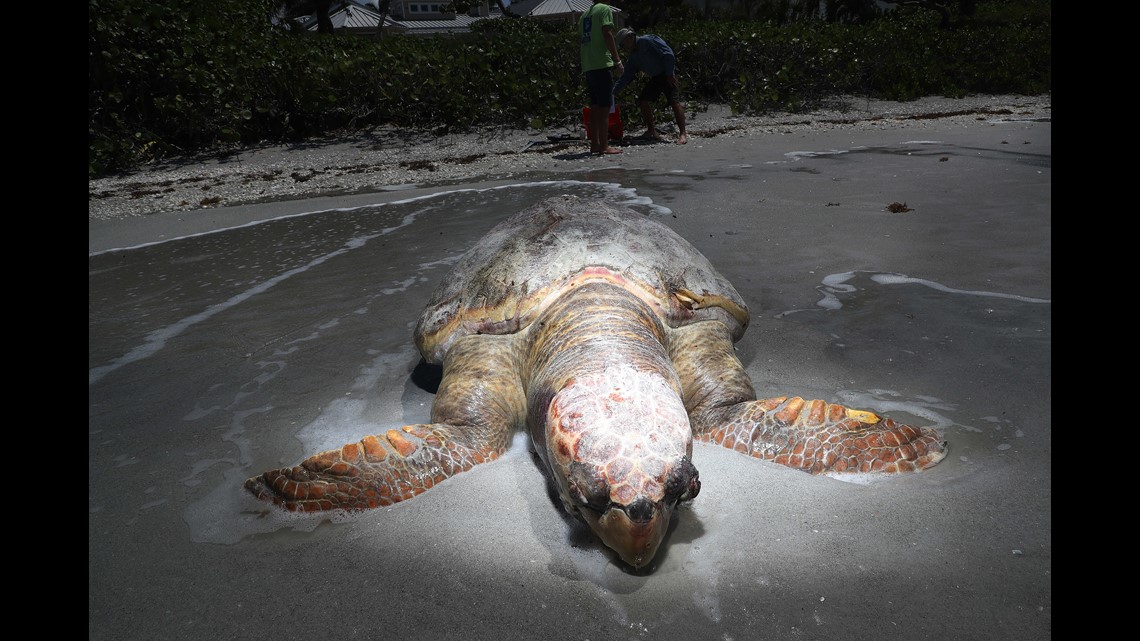 Fish kills and breathing problems in humans can start when levels reach 10,000 cells per liter, according to the Florida Fish and Wildlife Conservation Commission.

The organism that causes red tide here (Karenia brevis) occurs naturally, but many water quality scientists say the blooms last longer and are more intense due to human activities like farming and development.

A dead Kemp’s ridley sea turtle found on Sanibel Island is left to thaw at the Sanibel Captiva Conservation Foundation offices. Once thawed it will be necropsied to find out the cause of death. A large number of sea turtles are washing up on Sanibel and Captiva beaches. It is believed they are succumbing to red tide poisoning. Kemp’s ridley sea turtles are one of world's most endangered turtles.
Andrew West/The News-Press

Kemps' ridleys are one of the world's most endangered sea turtles.  The loggerhead population here is listed as threatened under the Endangered Species Act.

Strong onshore winds have been blowing for several days now, pushing the bloom and sick and dead sea turtles toward the coast.

Onshore winds are expected to continue through Friday, according to the National Weather Service.

When waves crash on the beach they release the toxin into the air.

Kraus' voice was raspy Tuesday after spending several days at the beach and being exposed to the outbreak.

A large dead male loggerhead sea turtle lies on a Sanibel Beach on Wednesday 7/25/2018. In the background are Rick Bartleson and Jack Brzoza, from the Sanibel Captiva Conservation Foundation. They were taking samples and measurements of the carcass. A large number of sea turtles are washing up on Sanibel and Captiva beaches. It is believed that they are succumbing to red tide poisoning. Bartleson says this is the worst red tide bloom since 2006.
Andrew West/The News-Press

"They float at the surface, and the waves bring them in, but we only get a certain percentage of what’s dead out there," Kraus said. "We get what floats to the beach or if someone just happens to see one. Everything else decomposes or sinks after a while, so we get a small percentage, and we know the numbers are actually higher."

Heather Barron, head of the Center for the Rehabilitation of Wildlife veterinarian hospital on Sanibel, said the red tide outbreak has collided with the height of sea turtle reproduction, something that doesn't often happen.

"This is way, way high," Barron said of the turtle numbers. "Normally red tide season is over in April. But now sea turtle nesting is at its peak, and you have adults in nearshore waters. And because of that they’re being effected."

Red tide blooms are typically broken up by cold weather systems that come from the mainland during the winter months, which means this bloom could be here well into next year.

Spray paint marks a dead sea turtle found on Sanibel on Wednesday. The marking tells those that come across the turtle that it has been found and logged into a data base by the Sanibel Captiva Conservation Foundation. The turtle will be buried by the city of Sanibel.
Andrew West/The News-Press

"This is so devastating to the population of sea turtles that was really starting to come back, and I fear this event will have an impact for years to come," she said.

Mote Marine Laboratory & Aquarium in Sarasota has seen about twice as many sea turtles as they get in an average year.

"We’re actually going out right now to pick up No. 112 for the year," spokeswoman Allison Delashmit said. "We normally have about 100 turtles that we pick up and bring back for necropsy each year."