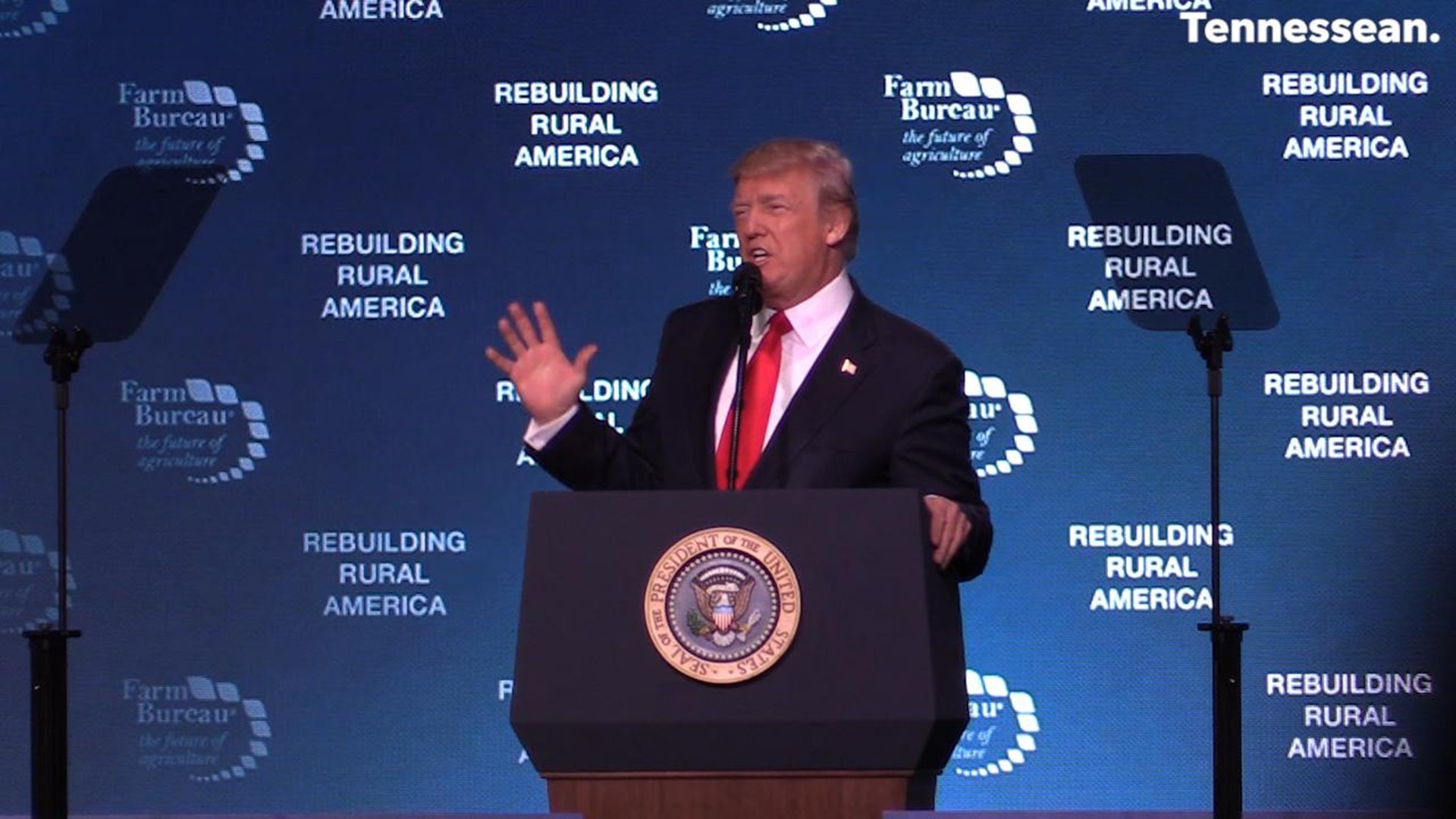 On Tuesday, President Donald Trump will make his third trip to Nashville since entering office, this time in support of U.S. Rep. Marsha Blackburn's bid for the U.S. Senate.

The president's return to Tennessee comes more than five months before the Republican congresswoman is expected to square off against former Democratic Gov. Phil Bredesen in the general election.

Both candidates face nominal opposition in the August primary election.

"I think what you're going to see out of Tuesday night is a lot of excitement from Tennesseans who are so pleased with the agenda that President Trump has pushed forward," Blackburn said Friday in a telephone interview.

President Trump speaks to the American Farm Bureau in Nashville

Blackburn cited the president's work on tax reform, appointments of federal judges and Supreme Court Justice Neil Gorsuch, his proposed wall along the southern border of the United States and efforts to ban sanctuary cities.

Blackburn said Tuesday's rally came together after the president offered her support and selected a date. "We said we would be thrilled," she said.

Blackburn is one of several lawmakers around the country who are openly embracing Trump heading into this year's midterm election.

Bredesen has said his campaign will not be focusing on Trump throughout the race.

Trump is scheduled to headline a campaign-style rally at Municipal Auditorium, followed by a fundraiser at a separate location.

In March 2017, Trump also held a similar campaign-style rally at the same venue on a cold day that featured long lines as a result of slow security checkpoints. The event also featured 2,500 protesters.

More: Trump in Nashville: 'Time for us to embrace our glorious national destiny'

With his latest appearance in Nashville, Trump will look to rally Blackburn's base of supporters as Republicans hope to stave off Bredesen, who in 2006 was the last Democrat to win a statewide election. Democrats are eyeing the U.S. Senate race to replace retiring Sen. Bob Corker in an effort to retake the upper chamber.

Photos: President Trump's visit to The Hermitage and Nashville

1 / 115
Larry McCormack / The Tennessean
President Donald Trump speaks at a rally at Municipal Auditorium on March 15, 2017, in Nashville.

Early polling has indicated the race between the two candidates is very close.

When Blackburn speaks at the rally, she plans on reminding Tennesseans that they want a conservative in the Senate who will bring their values and goals to Washington, D.C.

More: 26 races to watch in the midterms: Will Democrats make significant gains?

"If they want to see more of those good, hardworking Tennessee values to Tennessee, that is what I have always done and it is what I'm going to continue to do," she said.

In addition to supporting Blackburn, Trump's visit to Music City will likely feature most — if not all — Republican members of the state's congressional delegation.

When the president was last in Music City in January, he was joined by all seven Republican House members from Tennessee and U.S. Sens. Lamar Alexander and Corker, while speaking at the annual convention of the American Farm Bureau.

Alexander plans on attending the fundraiser and rally but will not be riding on Air Force One, given that he will already be in Tennessee, according to his spokeswoman.

As of publication, plans for who would be aboard Air Force One with the president were still being made.

Adding intrigue to Trump's visit is the August primary, which will see four top-tier candidates vying for the GOP nomination for governor.

Among those running is one of Trump's most ardent supporters: U.S. Rep. Diane Black, who has backed efforts to award the president the Nobel Peace Prize and recently introduced a bill seeking to crowdsource funding for the president's border wall.

Last year, the president hailed the Gallatin-based congressman for her work as chairman of the House Budget Committee while Congress worked to pass its tax reform plan.

More: Congress: We know these lawmakers won't be back after the 2018 elections

More: Rep. Diane Black steps down as budget chair amid run for governor

Black is expected to attend the rally.

Although it is unclear whether the president may use Tuesday's rally as an opportunity to tout or endorse Black's candidacy, he could be motivated to say something given Knoxville entrepreneur Randy Boyd's latest campaign ad.

In the ad, Boyd, who is also seeking the GOP nomination, likens himself to Trump.

"We're not career politicians. We are conservative businessmen who are looking to disrupt government as usual. President Trump is doing that in Washington. And with your help I will do that in Nashville," Body says in the ad.

Boyd's effort to compare himself to Trump could draw the president's ire, given Boyd's previous support for former Florida Gov. Jeb Bush, who ran against Trump in the 2016 GOP presidential primary.

When Bush was set to headline a Boyd fundraiser last fall, Laine Arnold, a spokeswoman for the campaign, said the Tennessee Republican was a "strong supporter" of Trump.

Arnold said Thursday that Boyd looked forward to welcoming the president when he comes to Nashville and he planned to attend the event with Blackburn.

A spokesman for Williamson County businessman Bill Lee said the Republican gubernatorial candidate plans on attending the rally and sending campaign representatives to the fundraiser.

House Speaker Beth Harwell, who is also seeking the GOP nomination, does not plan to attend Tuesday's rally or fundraiser.

Trump's latest visit to Tennessee may not be his last before the midterm elections.

When asked if she thought whether the president might return once again before Nov. 6, Blackburn said, "Our door is always open. We always say welcome to the president and the vice president when they want to come in."