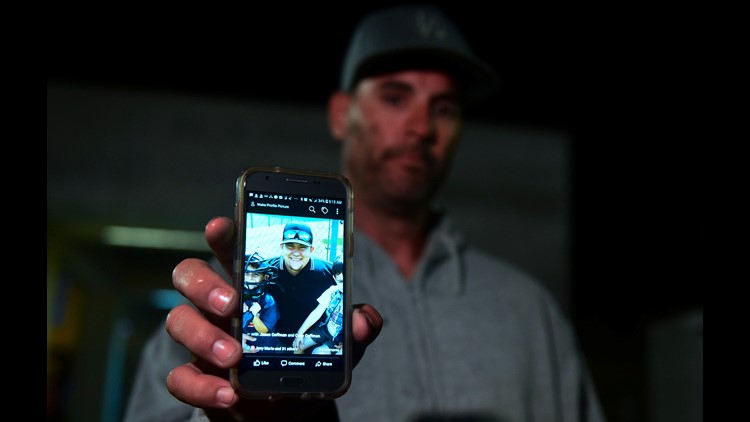 Photo by: FREDERIC J. BROWN/AFP/Getty Images
Jason Coffman displays a photo of his son Cody outside the Thousands Oaks Teen Center. He came there hoping to find Cody, who was at the Borderline Bar and Grill in Thousand Oaks, Calif., on Nov. 8, 2018.

Young people with 'so much life ahead' of them: These are the Thousand Oaks victims

Young people with 'so much life ahead' of them: These are the victims
Author: Rick Jervis and Jessica Guynn and Elizabeth Weise (USA TODAY)
Published: 2:58 PM EST November 8, 2018
Updated: 7:44 PM EST November 8, 2018
Jason Coffman displays a photo of his son Cody outside the Thousands Oaks Teen Center. He came there hoping to find Cody, who was at the Borderline Bar and Grill in Thousand Oaks, Calif., on Nov. 8, 2018.
FREDERIC J. BROWN/AFP/Getty Images

Jason Coffman will miss the fishing trips with his first-born son, Cody. He'll miss his companionship on the baseball diamond and the way his younger sons looked up to Cody, one of 12 people killed by a gunman at a country-western bar in Thousand Oaks, California.

"I cannot believe it's happened in my family," Jason Coffman, 41, told reporters shortly after learning Cody had not survived the shooting massacre at the Borderline Bar and Grill. "I am speechless and heartbroken. ... My life has changed now forever."

Authorities still haven't named all the victims in the attack, which occurred Wednesday night at the bar about 40 miles west of Los Angeles. Police said the gunman, identified as Ian David Long, opened fire inside the country-western dance bar with a Glock 21 .45-caliber handgun, killing at least 11 victims at the scene.

A sergeant with the Ventura County Sheriff's Department later died from his injuries after confronting the shooter. Long was also found dead inside the establishment.

The bar was hosting an event for college students and was crowded with 19- to 25-year-olds, Sheriff Geoff Dean said. It was the deadliest mass shooting since 17 students and teachers were killed at a Parkland, Florida, school in February.

In the early morning darkness, friends and family rushed to the scene desperately looking for their loved ones. They repeatedly called cellphones, scanned social media sites or urged law enforcement for answers.

Alaina Housley, a freshman at Pepperdine University, had gone to the Borderline to line dance with friends. As word of the shooting spread, her aunt, "The Real" host and "Sister, Sister" star Tamera Mowry-Housley, scoured social media, frantically looking for her niece. Mowry-Housley's husband, Adam Housley, asked his nearly 100,000 Twitter followers for prayers, as they held out hope she was OK.

By late Thursday morning, however, the couple learned Alaina Housley didn't make it out of the bar alive.

"Our hearts are broken," they said in a statement. "Alaina was an incredible young woman with so much life ahead of her, and we are devastated that her life was cut short in this manner."

At Vintage High School, Housley was an honors student who played on the varsity soccer team and served in student government all four years before graduating in June.

Vintage principal Sarah O'Connor remembered her as a "natural leader and connector," who was loved by her peers and the school staff. The school is offering counseling support to students and staff.

"One of my favorite moments was when Alaina, who played violin in our orchestra, had all of the violinists play happy birthday for her mom one year. Her mom is an employee here," O'Connor told USA TODAY. "She did something special for her mom and she used her musical talent.

"She was sweet and kind, a good to the core person with great values," O'Connor said.

Marcia Battat, Housley's piano teacher from the ages of 5 to 12, said she was thrilled when Housley said she would continue with music in college.

She recalled how the young girl would show up for lessons with a smile on her face –and a drawing or a poem for Battat in her hand. Housley was musically gifted and had a soft spot for playing songs from Broadway musicals, Battat said.

"She was very creative and artistic. ... She used to say how she loved piano and she loved me. It was a wonderful experience for me to be able to teach her," she said.

On Thursday, Battat prayed Housley was not among the victims. "All of the memories I have of her keep going through my mind. It's heartbreaking. I'm still in shock," she said.

Justin Meek, 23, never stayed idle. At Coronado High School, he was an Eagle Scout, president of the Octagon Club and captain of the JV water polo team, according to his LinkedIn page.

While attending California Lutheran University, Meek studied criminal justice and kept up his water polo skills, while also taking part in choir and serving as president of Club Italia. On the rare free time he had, he worked as a lifeguard for the city of Coronado.

Meek, who graduated from California Lutheran, was working Wednesday night as a security guard at the Borderline Bar and Grill when the shooting started and he died trying to save others, according to the university and several social media postings.

Meek was "a big, huge beast of a man, a big tall man. He was a security guard, but he was also a pussycat, one of the sweetest guys in the world," Tony Duran told USA TODAY. Duran is owner of Goode Time Productions, which supplies carolers such as Meek to Disneyland and other Disney venues.

A classically trained singer with a deep, rich voice, Meek quickly memorized all 100 songs in the repertoire and dreamed of singing with his girlfriend at Disneyland's Club 33.

The two had been talking of getting married and their future together as singers, Duran said.

"He was loved by so many people. He was just the sweetest guy you'll ever meet. He was the guy you really wanted to have as a friend because of the joy he brought."

Meek used his body to shield patrons, Duran said. "He died a hero. It's going to be hard to not have him with us."

Jason Coffman also rushed to the scene early Thursday hoping to find his son. Tearful and exhausted, Coffman said he feared Cody ran toward the gunfire, not away from it. "Cody is a tough kid," Jason Coffman told Headline News. "He’s one of the kids to run toward a bully, to stand up for others. I think that’s maybe what he did."

Hours later, after being told Cody died in the attack, Jason Coffman spoke to reporters, stifling sobs and leaning on his father-in-law, identified as Mike, standing next to him.

Cody was a good older brother to his two younger brothers, ages 8 and 9. Jason Coffman and his wife are also expecting a baby girl, he said.

Good with kids, Cody was the head umpire for the Camarillo Pony Baseball League and had planned to join the U.S. Army, Coffman said.

"There are so many people he touched," he said, "who are now going to be as heart- broken as I am."