Dozens of officers escorted the child's body to the funeral home Tuesday, offering her a salute when they arrived. 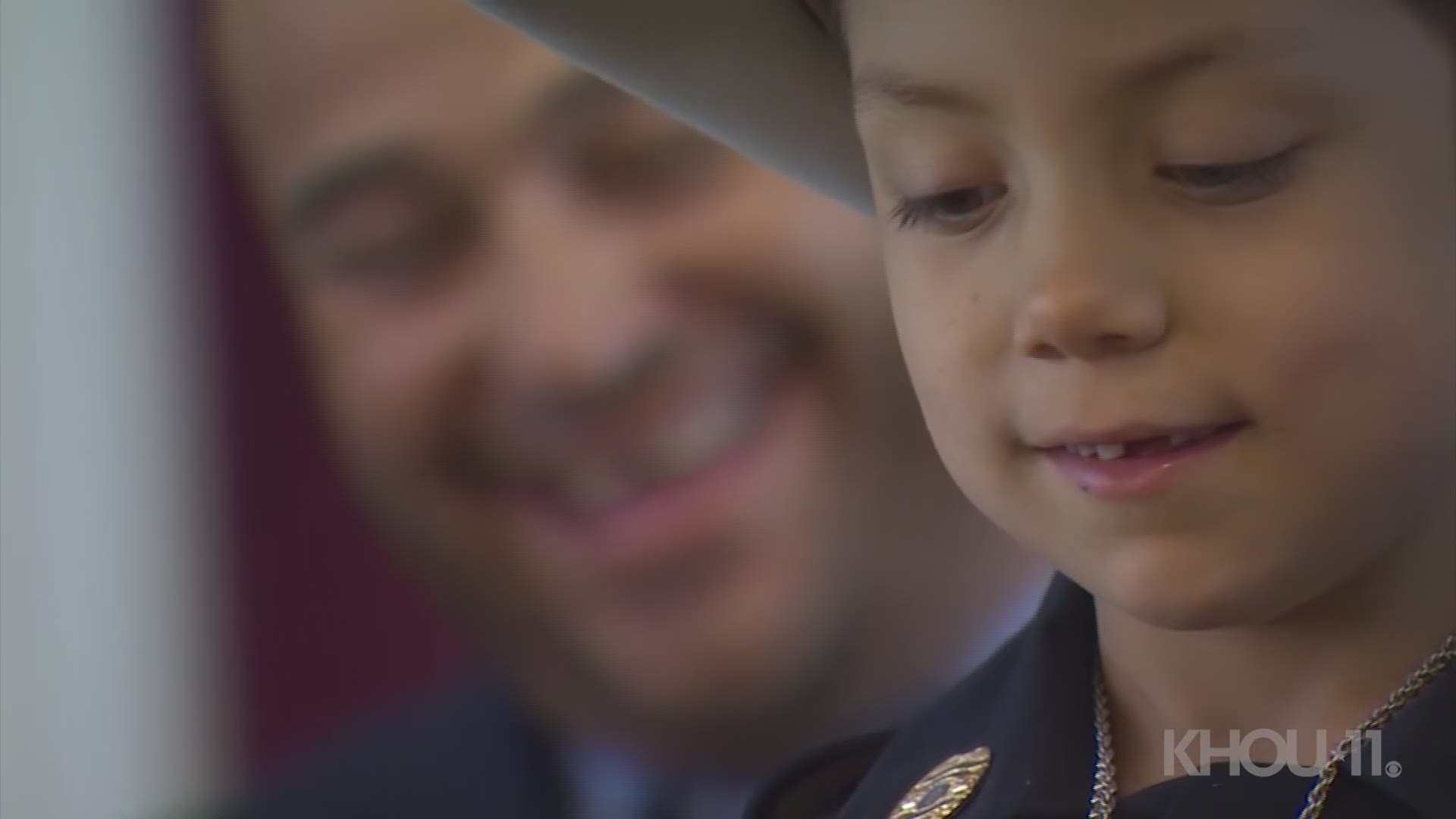 HOUSTON — Abigail Arias, the 7-year-old warrior who became an honorary Freeport police officer and Texas Ranger has passed away.

Her family confirmed the sad news with KHOU 11 News on Tuesday morning.

It is with heavy hearts that we announce the passing of Abigail Arias, the child who became an officer, a change agent for good and today, an Angel. Abigail, also known as Officer Arias 758, went to be with our Lord early this morning surrounded by her family and friends. Her love, compassion, and most importantly, her magnanimous spirit, will live on for generations to come. It’s both our duty and privilege to embody what Abigail taught us: to live life to the fullest, to never give up hope no matter the odds, to fight “the bad guys” passionately, and most importantly, to love one another - and always Stay Relentless!

Before noon dozens of officers gathered their patrol vehicles to transport the little girl's body to the funeral home. When they arrived they offered her a prayer and a salute.

When Abigail was 4 years old, doctors found a stage four Wilms Tumor wrapped around her aorta. She underwent 80 rounds of chemotherapy to shrink and remove the tumor, but that almost killed her. Doctors discovered Abigail was allergic to one of the therapies used.

For five months, her cancer laid in remission before the same cancer came back and spread to both of her lungs. Abigail’s doctors said they no longer knew any treatment or chemotherapy able to cure her. Her cancer was terminal.

With that news, Abigail decided she was going to live life to the fullest and fulfill her dreams of becoming a police officer. 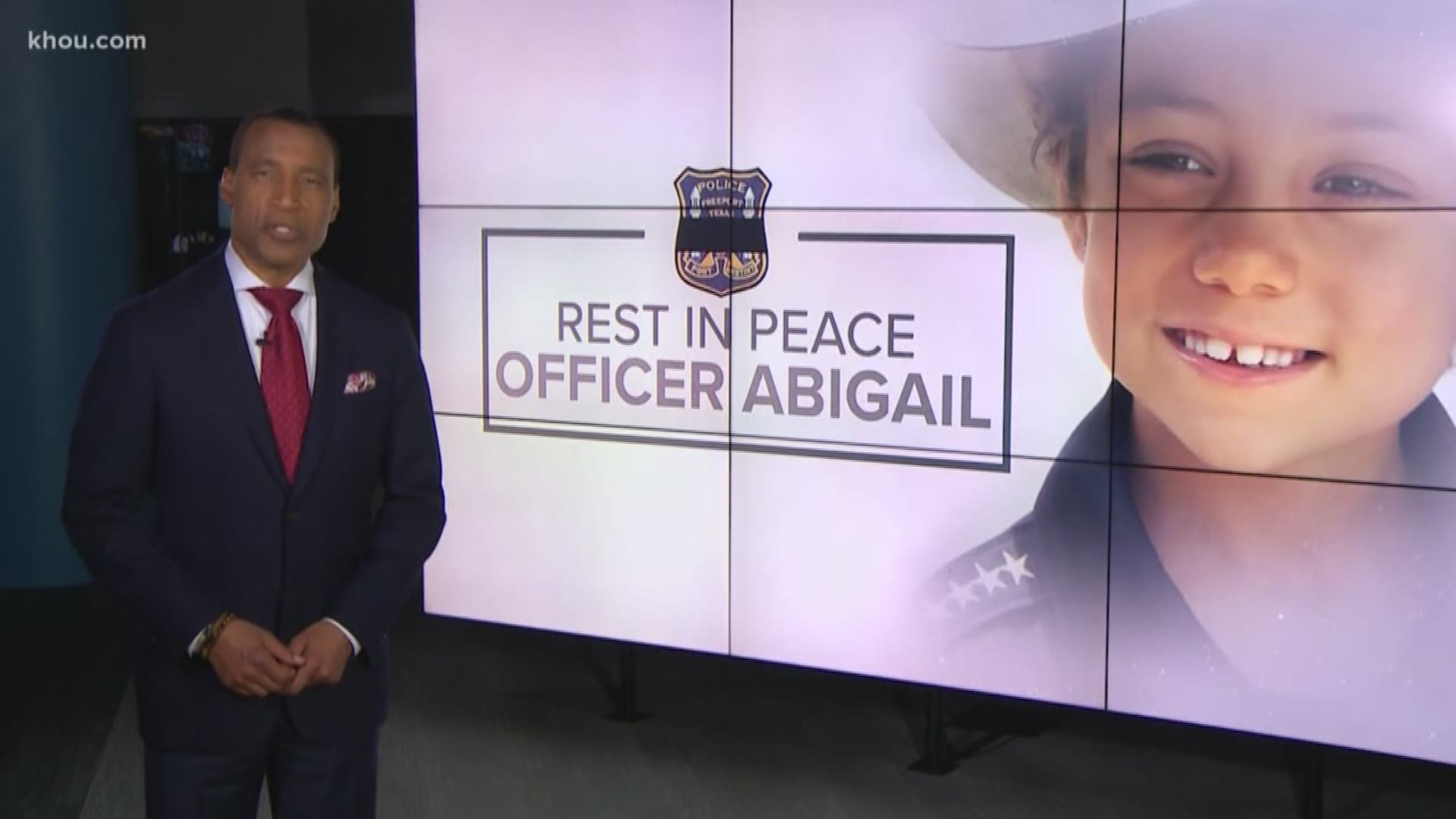 In Dec. 2018, her family took her to meet Freeport Police Chief Ray Garivey. He and Abigail bonded the moment she shared her dream.

“She (said) I want to be a police officer,” Garivey said. “I looked back at her dad and said she probably shouldn’t have told me that. He kind of winked at me and I said we’re going to make that happen.”

On Feb. 7, 2019, Abigail and 32 others were sworn in as Freeport police officers. She was given badge number 758. Freeport Mayor Troy Brimage also declared Feb. 7 “Abigail Rose Arias Day.”

“It felt near inside my heart and inside my body I felt excitement and all of (the) love, Abigail said.

Abigail’s story was shared around the world. Her first week on the job, Abigail received hundreds of letters from people who admired and supported her. She also received police challenge coins from several police departments, including the New York City Police Department.

RELATED: Abigail's first week as a police officer is a resounding success

Abigail even got to ride in the Texas Department of Public Safety helicopter.

Freeport Police Department - Texas
It is with heavy hearts that we announce the passing of Abigail Aria... s, the child who became an officer, a change agent for good and today, an Angel. Abigail, also known as Officer Arias 758, went to be with our Lord early this morning surrounded by her family and friends.

A few weeks later, Abigail and her family traveled to Austin so she can be sworn in as an honorary Texas Ranger. She was given a Texas Ranger hat, badge and proclamation proving that she was a member. The officer of House Speaker Dennis Bonnen said it was one of his most memorable days in the state House.

“In 20 years, the top,” he said. “Getting to do things for kids like Abigail is special.”

In March 2019, Officer Abigail won the K-9 competition at the Houston Livestock Show and Rodeo, a contest for which she never trained. Abigail teamed up with police dog handler Madison Dupree, whose dad passed away to cancer.

In April, Abigail’s parents shared on Facebook that her cancer nodules doubled in size. Her parents did not go into details about her condition but thanked everyone following Abigail’s journey for their love and dedication.

Many thought this would be the last we hear from sweet Abigail, but the warrior continued to fight and live everyday like her last.

In the months after, she started a foundation to help other kids with cancer and visited the White House, thanks to an invitation from the Secret Service.

Despite the pain from her cancer and countless surgeries, Abigail continued to spread her continuous smile and energy to thousands.