Two Democratic senators share a concern that Biden's plan is too big, but have infuriated colleagues by not making any counter-proposals public. 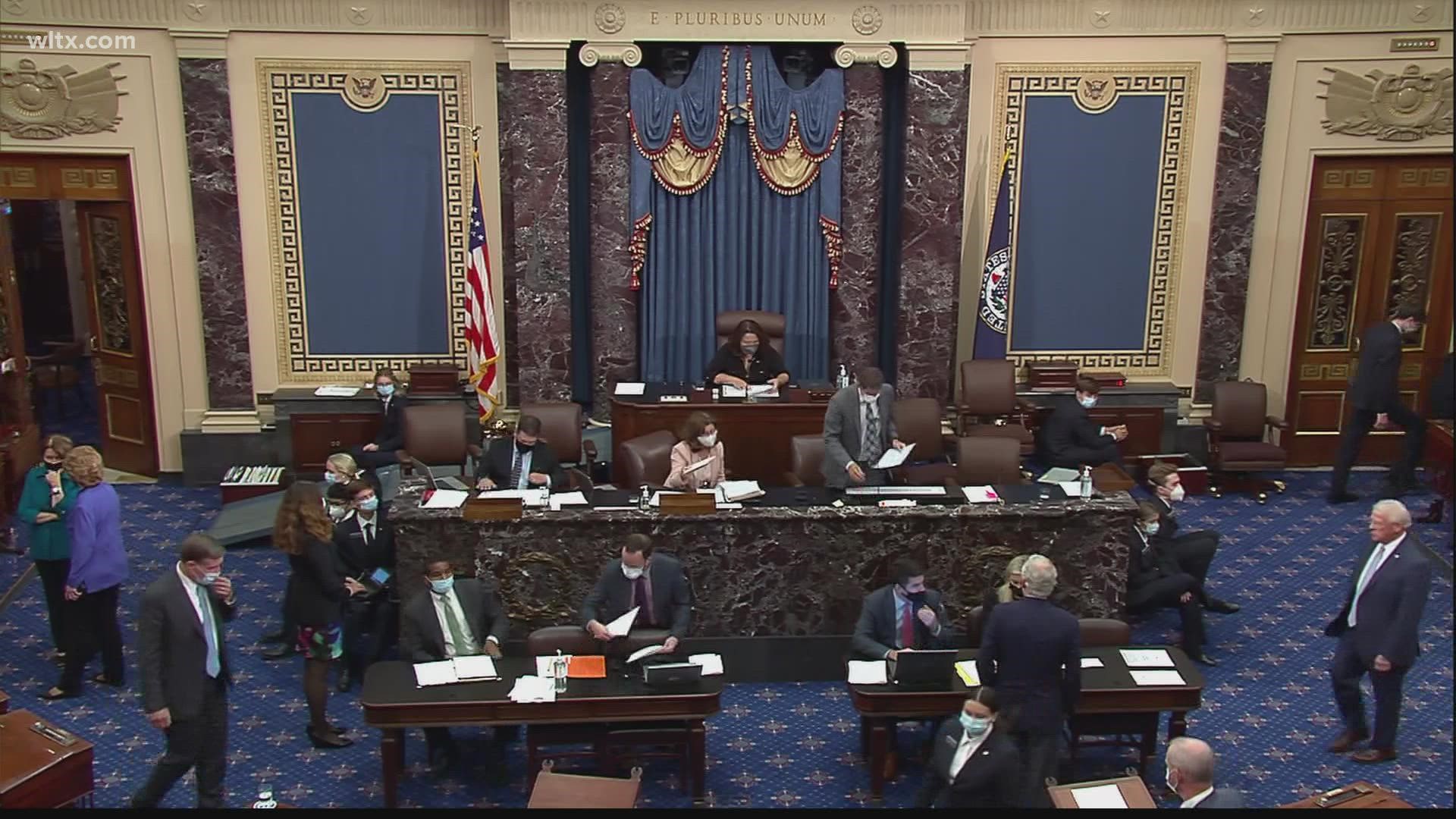 With Republicans solidly opposed and no Democratic votes to spare, Biden canceled a trip to Chicago that was to focus on COVID-19 vaccinations so he could dig in for a full day of intense negotiations ahead of crucial votes. Aides made their way to Capitol Hill for talks, and late in the day supportive House Speaker Nancy Pelosi and Senate Majority Leader Chuck Schumer met with Biden at the White House.

The risks were clear, but so was the potential reward as Biden and his party reach for a giant legislative accomplishment — promising a vast rewrite of the nation’s balance sheet with an ever-slim majority in Congress. His idea is to essentially raise taxes on corporations and the wealthy and use that money to expand government health care, education and other programs — an impact that would be felt in countless American lives.

“We take it one step at a time,” Pelosi, told reporters.

Attention is focused on Sens. Joe Manchin of West Virginia and Kyrsten Sinema of Arizona, centrist Democrats. They share a concern that the overall size of Biden’s plan is too big, but have infuriated colleagues by not making any counter-proposals public.

In a possibly ominous sign, Manchin sent out a fiery statement late Wednesday, decrying the broad spending as “fiscal insanity” and warning it would not get his vote without adjustments. “I cannot — and will not — support trillions in spending or an all-or-nothing approach,” he said.

Together, the two senators hold the keys to unlocking the stalemate over Biden’s sweeping vision, the heart of his campaign pledges. While neither has said no to a deal, they have yet to signal yes — but they part ways on specifics, according to a person familiar with the private talks and granted anonymity to discuss them.

Manchin appears to have fewer questions about the revenue side of the equation — the higher taxes on corporations and the wealthy — than the spending plans and particular policies, especially those related to climate change that are important to his coal-centric state. He wants any expansion of aid programs to Americans to be based on income needs, not simply for everyone.

Though Sinema is less publicly open in her views, she focuses her questions on the menu of tax options, including the increased corporate rate that some in the business community argue could make the U.S. less competitive overseas and the individual rate that others warn could snare small business owners.

With Democrats' campaign promises on the line, the chairwoman of the Congressional Progressive Caucus, Rep. Pramila Jayapal of Washington state said of Manchin, “He needs to either give us an offer or this whole thing is not going to happen.”

Pelosi suggested she might postpone Thursday's vote on a related $1 trillion public works measure that Manchin, Sinema and other centrists want but that progressives are threatening to defeat unless there’s movement on Biden’s broader package.

Thursday's vote has been seen as a pressure point on the senators and other centrist lawmakers to strike an agreement with Biden. But with Manchin and Sinema dug in, that seemed unlikely.

“Both bills are must-pass priorities,” according to a White House readout of the president's meeting with the congressional leaders.

At the same time, Congress is starting to resolve a more immediate crisis that arose after Republicans refused to approve legislation to keep the government funded past Thursday’s fiscal yearend and raise the nation’s debt limit to avoid a dangerous default on borrowing.

Democrats are separating the government funding and debt ceiling vote into two bills, stripping out the more-heated debate over the debt limit for another day, closer to a separate October deadline.

The Senate is poised to vote Thursday to provide government funding to avoid a federal shutdown, keeping operations going temporarily to Dec. 3. The House is expected to quickly follow.

With Biden and his party stretching to achieve what would be a signature policy achievement, there is a strong sense that progress is being made on the big bill, said an administration official who requested anonymity to discuss the private talks.

The president is highly engaged, meeting separately with Manchin and Sinema at the White House this week and talking by phone with lawmakers shaping the package. He even showed up at Wednesday evening's annual congressional baseball game, a gesture of goodwill during the rare bipartisan event among lawmakers.

To reach accord, Democrats are poised to trim the huge Biden measure’s tax proposals and spending goals to reach an overall size Manchin and Sinema are demanding.

“I think it’s pretty clear we’re in the middle of a negotiation and that everybody’s going to have to give a little," said White House press secretary Jen Psaki.

Psaki said members of Congress “are not wallflowers” but have a range of views. "We listen, we engage, we negotiate. But ultimately, there are strong viewpoints and what we’re working to do is get to an agreement.”

Besides senators, Biden’s problems with fellow Democrats also include a small number of centrist House Democrats who are also are bristling at the far-reaching scope of his domestic agenda, which would expand health care, education and climate change programs, all paid for by the higher tax rates.

Progressive lawmakers warn against cutting too much, saying they have already compromised enough, and threatening to withhold support for the companion $1 trillion public works measure that they say is too meager without Biden’s bigger package assured.

But centrists warned off canceling Thursday's vote as a "breach of trust that would slow the momentum in moving forward in delivering the Biden agenda,” said Rep. Stephanie Murphy, D-Fla., a leader of the centrist Blue Dog Democrats.

Republicans are opposed to Biden’s bigger vision, deriding the $3.5 trillion package as a slide toward socialism and government intrusion on Americans lives.

Biden insists the price tag actually will be zero because the expansion of government programs would be largely paid for with higher taxes on corporations and the wealthy — businesses earning more than $5 million a year, and individuals earning more than $400,000 a year, or $450,000 for couples.

The House did vote Wednesday to extend the debt limit through through Dec. 16, but it’s doubtful that Democratic bill will pass the Senate in the face of GOP opposition — shelving that debate for another day.

Treasury Secretary Janet Yellen has told Congress it has until Oct. 18, when her department will likely exhaust all of its “extraordinary measures” being taken to avoid a default on the government’s obligations.