It's mating season for elk in the Smokies. The bulls are full of testosterone and aggressively protect their harem from all nearby creatures and vehicles. 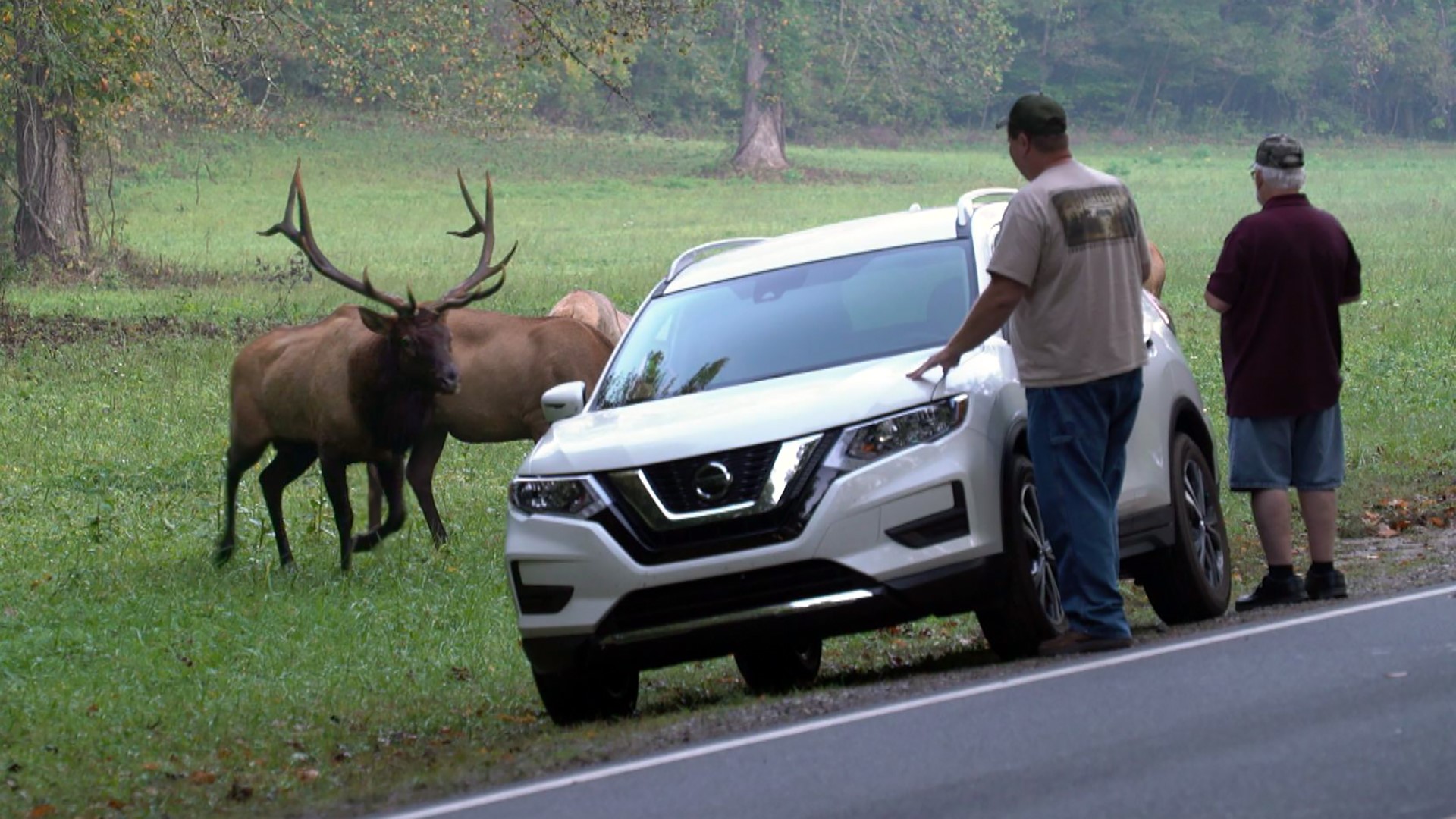 Park biologists warn now is not the time to get too close to the largest wild animals in the Smokies.  Male elk are more aggressive than usual, willing to angrily charge any person or vehicle that enters its domain.

"We are in the peak of rut, the mating season for elk that begins in September and goes through October.  The bull elk, their testosterone levels are very high. They will charge at people and they will ram a car. It is a natural defensive response," said Bill Stiver, GSMNP supervisory wildlife biologist.

Viewer Ryan Bump posted video of a large bull elk ramming a pickup truck diving on US 441 next to a pasture in Oconaluftee on October 3.

WBIR photojournalist Jerry Owens shot video of tourists viewing elk throughout the day in Oconaluftee. We showed it to Stiver, who noted the many do's and don'ts of visitor behavior.

"We want people to enjoy wildlife. But we want them to enjoy it in a safe manner. And when it comes to elk, it's a little bit different than bears and other wildlife," said Stiver. "An elk will go where it wants to go, and it's important for you to move and maintain a safe distance of 50 yards from that animal."

If you see an elk while driving, Stiver recommends pulling completely off the side of the road a safe distance from the animal.

"We recommend people stay close to their vehicle. Those large bull elk, they can weigh between 800 and 900 pounds. And they can run in quick bursts of 45 miles an hour. You need to have a place you can retreat for safety," said Stiver.

Stiver said don't park too close to the animals.

"What you don't want to do is pull over right next to the elk. You want to drive up the road a safe distance, pull off, stand next to your vehicle, and use binoculars," said Stiver.

We showed Stiver video of several vehicles pull directly beside a large bull elk in a pasture with its harem of females. Multiple times, the elk charged at the parked cars.

"These guys [tourists] are totally inappropriate. They're parked right next to where the elk were, there's a sign right there that says the fields are closed and don't approach within 50 yards. That elk will ram your car. He's telling you to stay away," said Stiver.

You can hear someone yell for the spectators to move back from the aggressive elk.  When they do, it doesn't take long for another car to park in the same location.

Credit: WBIR
A bull elk grazes with a harem of females along U.S. 441 at Oconaluftee in the Great Smoky Mountains National Park.

"They pulled up right in the same spot, they've got their phones out, they're taking pictures. But we need to do that at a safe distance," said Stiver.

Stiver noted our video of a group of cars at a safe distance parked on the opposite side of the road from the herd. The spectators stood with their cars as a barrier between themselves and the elk. They photographed the animals with large telephoto lenses.

"You can see the vehicles parked down the road watching the elk at a very safe distance. They have the right cameras to get close shots of elk and are not willfully approaching wildlife. That's what we want to foster," said Stiver.

Credit: WBIR
A bull elk bugles as it stands beside females in its harem in the Great Smoky Mountains National park.

Traffic is another large safety concern when viewing elk. The park asks visitors to watch for pedestrians and drive slowly through crowded areas.